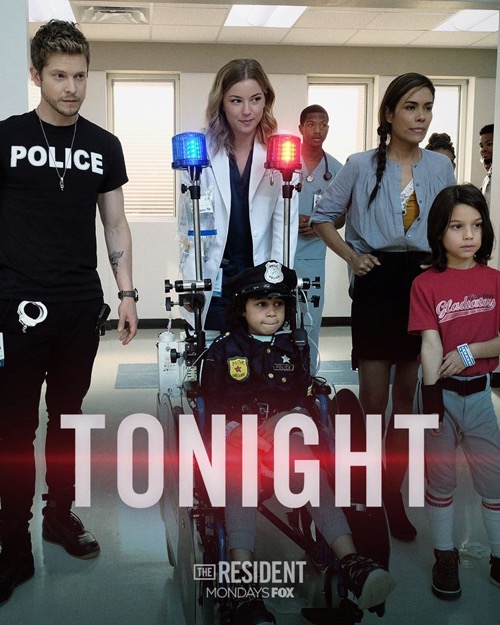 Tonight on FOX their new medical drama The Resident airs with an all-new Monday, October 22, 2018, episode and we have your The Resident recap below.  On tonight’s The Resident season 2 episode 5, “The Germ,”  as per the FOX synopsis, “ell makes the executive call to utilize Julian Booth’s medical devices instead of the hospital’s usual products, forcing Kit and AJ to momentary stop their feuding and team up against him.

Elsewhere in the hospital, Conrad and Nic work to make a child’s dreams come true after finding out his cancer has returned and the rest of the staff takes notice of Julian and Devon’s new friendship.”

The Resident season 2 episode 5 airs at 9 PM – 10 PM ET on FOX. Make sure to bookmark this spot and come back for our The Resident recap! While you wait for the recap make sure to check out all our television recaps, news, spoilers & more!

Nic and Conrad examine a boy who fell after having a seizure. Conrad thinks he may just need a med adjustment, but orders tests just in case. His little brother has a bad cough, Conrad is worried about him because he has a fever, a bruise and his nodes are swollen. His pediatric oncologist was Dr. Richards who retired in June and they don’t like his replacement, Kirk.

Conrad tells Devon that he has a VIP patient and when Devon goes to see him, it is Bradley and he is doing great, besides needing a whole new heart valve. Bradley reveals that he got lucky with a new firm, the signing package took care of all his med school debt; he is debt free and pulling in mid-six figures, he couldn’t be happier. Bradley asks about wedding plans and Devon looks stressed, he says it is an endless pile of a to-do list.

Kit and Aj are upset and go see Bell about the medical devices they are being given, which came from Julian Booth.

Conrad and Nic find out that one of the brothers is dying, it is Jasper and he cannot be cured. Conrad tells the mother, the father already bailed on the family. Conrad tells her to focus on the quality of life her son has left, and be there for her other son, Henry.

Julian shows Devon a video of her dancing when she was younger, then she asks him to show her the health monitor app he is working on. Devon says they are still working on it.

Kit and AJ speak to patients regarding the medical devices; saying that doctors want the devices that work best for patients, the administration wants the best ones that suit the profit margin and encourage the patients not to let the administration to decide for them. Kit speaks to Bell and tells him that her patient wants a different device.

Conrad goes to see Henry, he tells him that when he grows up he wants to be a Scientist so he can come up with a cure to save Jasper. Jasper’s birthday is coming up, he was going to dress up like a cop and now they have to be in the hospital. Conrad tells Henry that maybe he can help. Make a Wish couldn’t help with short notice, but Nic did get them to give some police costumes.

Bell goes into his office expecting to see Kit there to give him a massage and he finds a guy and a massage table.

Conrad is dressed in a police shirt and pretends that he needs a partner, Jasper volunteers and gets dressed in a police uniform, in his wheelchair. Mina joins in on the play, Jasper is excited and plays along. Everyone is looking for the germ, Devon is playing along as well. Conrad tells Jasper to hit the germ with an electric shock to save everyone.

Kit’s patient, Penny, worsens – she has lost feeling from the waist down and Kit is forced to take her into surgery and use a device that she convinced her not to use.

Julian and AJ argue over a new device, she tells him either he uses it or patients will be transferred to a Dr. Benedict who does. AJ goes to see Dr. Benedict, and asks him why he using the new valve, he answers that it is a great product.

Jasper tells Conrad that he is not going to grow up to be a police officer, he saw his mom crying. Jasper then asks Conrad to take care of Henry for him, try to fix his seizures because their mom needs him. Conrad promises to help Henry. Jasper worsens, his mother and Henry are there, Conrad says there is nothing they can do. Henry is crying, his mother is crying, Conrad tries to help them through it as Jasper is dying. Jasper dies.

AJ uses the new valve, it fits like a glove in Bradley.

Kit asks Bell how his massage was, then says it is not fun having something forced on you – she was making a point.