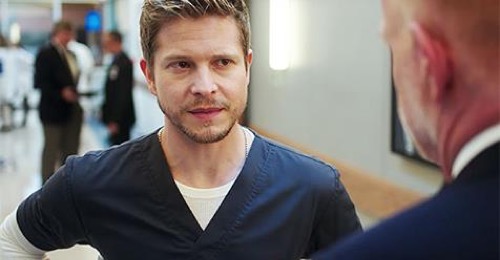 Tonight on FOX their new medical drama The Resident airs with an all-new Monday, October 29, 2018, episode and we have your The Resident recap below.  On tonight’s The Resident season 2 episode 6, “Nightmares,”  as per the FOX synopsis, “Halloween at Chastain proves to be just as spooky as ever when Conrad is tasked with diagnosing a young woman admitted to the hospital with extreme night terrors.

Meanwhile, Devon faces his first Halloween in the ER, Nic panics over her decision to bring her newly sober sister to Mina’s epic annual Halloween party and Bell finds an interesting way to make use of his new assistant.”

The Resident season 2 episode 6 airs at 9 PM – 10 PM ET on FOX. Make sure to bookmark this spot and come back for our The Resident recap! While you wait for the recap make sure to check out all our television recaps, news, spoilers & more!

A young woman named Laurie in her 30s is having a panic episode in the ED on a gurney. Devon tries to calm her down. They plan to bring her to the fifth floor. Meanwhile, Nic tries to talk Conrad into going to Mina’s Halloween party. He tells her he can’t. He has to work. It is Halloween night and they are understaffed. Irving leaves Devon in charge of the ED as he gets ready to go to Mina’s. An arm is brought in on a gurney. It needs to be reattached.

Nic gets ready for the party with her sister who is newly sober. She promises she will be on the straight and narrow. Conrad meets with Laurie. She tells him she keeps having terrifying dreams. She cannot figure it out. She isn’t on meds. She nannies for a family. She doesn’t talk to her family anymore since she moved to the city. They don’t approve.

Bell sits in his office on Tinder. Conrad’s dad calls and apologizes for their missed meeting. Conrad sees Laurie in the hall and she has no idea who he is.

AJ names the arm Clyde. Devon humors him. Meanwhile, Nic and her sister get into Mina’s party. Irving gets turned down at the door for his poor wolf costume. Nic is worried after her sister takes off to see a good looking guy.

Conrad diagnoses Laurie with Capgra Syndrome. He calls for neurology. Bell fires the new IT guy. Before he can finish telling him to pack his stuff, he tells Bell he knows he has been looking for a date and he can set him up. Bell begins to listen. Meanwhile, Laurie has disappeared. Conrad finds her on the roof. He talks her out of the idea of jumping.

Devon gets angry when he finds someone has made a peace sign with the arm he has on ice. AJ tells him to relax. EMTs bring in a leg from the same man who is trapped. AJ pages Mina. He needs help. She leaves Nic in charge of her party.

Conrad tests Laurie and realizes that her illness is a biological one. There is hope. Conrad’s dad shows up. He talks to him about taking a weekend away together. Conrad suspects something bad. The patient with the missing limbs is wheeled in. His wife and daughters panic in the waiting room. Devon and another resident work on him as his heart rate drops.

Irving finally gets into the party as a king. Nic cannot find her sister. She looks around and finds her in the bathroom making out with a guy. Just seconds before the man offered her sister pills. She took them but told him she was going to save them for later.

Laurie wakes up and takes a walk. She starts to have an episode of men chasing her. She gets out of her bed and runs through a plate glass window. Conrad and Bell hold her down while they give her a sedative. She has severed her femoral artery.

Nic has a panic attack and slides down onto the floor in the kitchen. Her sister comes to help her. She admits she has been having them for a year now.

Conrad sees something on Laurie’s MRI and asks the surgeon to take a look while he works on her artery. Meanwhile, Bell meets with his blind date. He gets paged. AJ needs him in surgery. Four of them all work to reattach the limbs. His heart starts to fail. AJ jumps in and saves him. They all think he is a show off.

Conrad has the surgeon check Laurie’s abdomen. They discover she has a teratoma. He gives her the good news that she is going to be okay. Meanwhile, Devon, AJ and Kit see their patient wake up after his reattachment surgery.

Bell finds out that his blind date who he just slept with is his IT guy’s mother.

Conrad has a nightmare. His mother falls down the stairs with a drink in her hand. He runs to her at the bottom. His father tells him to go. He wakes. Nic tries to comfort him. He doesn’t want to talk about it.