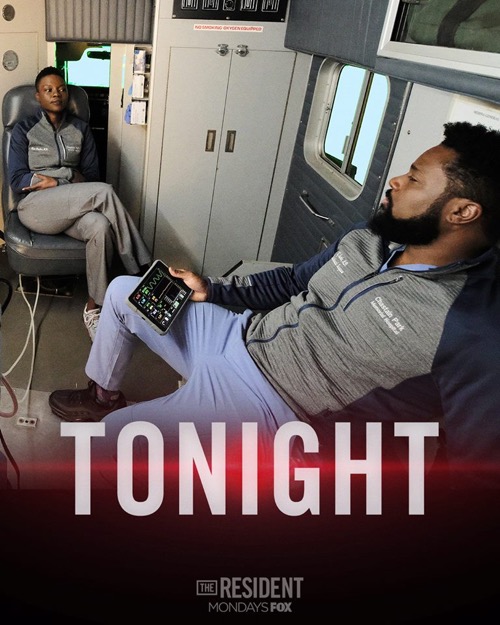 Tonight on FOX their new medical drama The Resident airs with an all-new Monday, November 19, 2018, episode and we have your The Resident recap below.  On tonight’s The Resident season 2 episode 8, “Heart in a Box”  as per the FOX synopsis, “Conrad goes head-to-head with Bell after he recommends one of Julian’s risky medical devices to Zoey, who’s already lost one son and is back in the hospital with the other.

Nic fears that Conrad may be getting overly attached to his patient. Meanwhile, Mina and Austin grow closer while working on a difficult heart transplant, Devon embarks on a very difficult day and Dr. Lane Hunter returns.”

The Resident season 2 episode 8 airs at 9 PM – 10 PM ET on FOX. Make sure to bookmark this spot and come back for our The Resident recap! While you wait for the recap make sure to check out all our television recaps, news, spoilers & more!

Devon is daydreaming about his kiss with Julian while Priya talks about a job opportunity in San Francisco. He comes to and tells her he can’t move now. He thought she was all right with them doing pursuing their goals. She doesn’t want to be apart during their first -year of marriage.

Mina can’t stop checking her boyfriend’s pulse in bed. Meanwhile, Conrad coaches Henry on how to hit the ball before he takes the plate. His mom smiles. He makes it all the way but drops to the ground and shakes. They all run to him.

Bell meets with Lane in jail after he gives a deposition under oath. Lane is angry that he turned her in. But she plans to take him down with her. She has a video proving just how close they were and now she plans to tell everyone how he talked her into making decisions. Unless he can give her bail money and a top-notch lawyer then she will keep Chastain out of it.

Julian questions her boss about his connection to a company who manufactured medical devices. They were lying by importing their equipment from China but selling it as made in the USA. He tells her he was young and left right after they were discovered.

Conrad and Henry’s mother arrive in the ER with him. He is having a seizure and needs more meds. His mother agrees. The doctor orders it. Julian is alerted by the insurance company that Chastain has a patient on three seizure meds. She heads down there and when Devon tells her it is a young boy she doesn’t ask any additional questions and leaves.

Mina and Nic walk with a man named Wallace who needs a heart transplant. It’s his wife’s birthday. She died at the hospital after being sick for a year. Now he is here and Nic and Mina aren’t going to let him go it alone.

Nic tells Conrad that he has become too close to Henry. He cannot help it, he tells her. He stays with Henry during a procedure.  Nic watches them as they talk.

While AJ and Mina argue about her boyfriend in the hall Nic comes to see them. Wallace has a heart on the way. AJ asks Mina if she wants to help him harvest the heart. She is thrilled.

Henry’s mother is told that if his seizures continue he will suffer from brain damage. Conrad comforts her. Julian arrives and talks to them about implanting a Vagus Nerve Stimulator that can help control or stop the seizures. She gives the information to the doctor and not Conrad he reaches for the paperwork.

Nic comforts Wallace before he heads to surgery. Meanwhile, Devon is having issues in the ER with an older couple. The husband has stomach issues.

While bringing the heart back to Chastain Mina tells AJ about why she is so cautious with her emotions. When she was younger she was babysitting her two younger sisters and fell asleep. She left the stove on and the house caught on fire. They both died because she couldn’t save them. That’s why she went into medicine. And she never wants to talk about it again. For the first time, he is speechless.

Devon is working to revive a young boy. It has been an hour. He calls his death and is immediately approached by the elderly woman whose husband is still having stomach issues. He isn’t ready for surgery and no-one will admit him to the hospital. Just then, the medics wheel in a drug user who is hysterical. Devon attempts to assess him and is punched in the face.

Julian is nervous about Henry having the VNS implanted since discovering her boss could be lying about his past. Conrad has no idea but is also hesitant about the implant. Bell talks Henry’s mother into going through with it.

Mina and AJ arrive with the heart and realize something isn’t right with it. The heart is having a heart attack so to speak. They need to fix it quickly before transplanting it. They get to work. Mina fixes it with AJ’s assistance. They smile at one another and fist pump.

Bell tells Henry’s mother that everything went perfectly following the surgery. She hugs him.

AJ admits to Nic that he does care for Mina but he isn’t ready to share that yet since he is her mentor. One day he won’t be. Nic is impressed with his emotional share.

Nic wakes Conrad to tell him Henry is out of surgery. He tells her he is going to hang back and let his mom just be there.

Julian comes to see Devon who has a black eye. He vents to her and she in return shares that she is worried about her field and if she is helping. He tells her she is smart and will do the right thing.

Lane calls Bell collect. He is aggravated but tells her he has some lawyers in mind. He will get her out soon.

Julian takes a ride to the warehouse where the devices are kept. She tells the security guard she needs to check on an order. He lets her in. She looks over the boxes and sees that it is all being imported from China. Her boss lied to her.