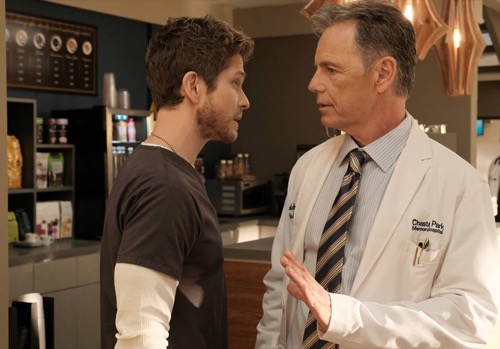 Tonight on FOX their new medical drama The Resident airs with an all-new Monday, March 12, 2018, episode and we have your The Resident recap below.  On tonight’s The Resident season 1 episode 7, “The Elopement,”  as per the FOX synopsis, “Conrad goes head-to-head with Lane when he disagrees with her over a treatment plan for a terminal cancer patient. Tensions rise when Jude inserts himself in the middle by offering to perform the invasive procedure Conrad is fighting against. When a VIP patient crosses the line with Nic, she must devise a strategy on how to stand her ground and combat the situation.”

The Resident season 1 episode 7 airs at 9 PM – 10 PM ET on FOX. Make sure to bookmark this spot and come back for our The Resident recap! While you wait for the recap make sure to check out all our television recaps, news, spoilers & more!

Devon and Priya lay in bed discussing their wedding budget and guests. Priya just wants to elope. Meanwhile, Conrad just spent his night as someone else’s rebound. Bell tries to button his sleeve but his hand is shaking furiously. Conrad walks in to the hospital. Nic and Mina notice he didn’t go home the night before.

Nic talks to Devon. She wants to report Hunter to the state board. Nic wants Devon to pretend he wants to do a research paper and get into Hunter’s clinic to see her files. Conrad interrupts them. Nic informs Conrad about a 70 year old postal worker who has cancer that needs to be seen. He is Hunter’s patient. Conrad talks to the patient and his wife. He doesn’t want to try and prolong his life and make his wife pay endless medical bills.

Claire, bell and the other hospital heads start their meeting. Some of the heads joke about Bell’s failure to lock down Carver. The conversation turns to doctors with medical errors. One head mentions that Mina should be terminated to send a message. Bell is quick to shoot the thought down.

Conrad and Devon venture to the VIP area of the hospital. They meet with Dr. Massero who is treating a celebrity baseball player, Bobby Singer. His thigh has swelled up. Wilmot, Conrad, Devon and Massero assess the patient.

Conrad bumps into Jude into the hall and ignores his questions about sleeping with Noni and whether he is over Nic.

The Tumor Board meets. Conrad supplies information about Hunter’s patient who has cancer and just wants to go home to spend his remaining days. Hunter interjects. She will talk to the patient about pursuing a biopsy.

Bell discusses Mina’s surgeries with her. She informs him she will be working under another surgeon for the next 3 months. It has been approved already by the residency board.

Devon approaches Hunter about writing a research paper. He isn’t keen on the idea. He tells Nic. Hunter takes Conrad with her to the cancer patient’s room. She talks him into getting a biopsy while Conrad encourages him as well.

Devon performs an ultra sound on his thigh to see what is causing his clot. Nic comes in to get some baseballs for the children’s ward autographed. He asks Nic subtly for her phone number, to send her some swag for the kids, he tells her.

Nic is disgusted when she receives a penis pic from Bobby. She tells Conrad. He wants to go up there and talk to Bobby. Nic asks him not to.

Conrad heads up to Bobby’s room. He has a girl in there. Conrad asks for a minute. Conrad asks him not to send Nic pics and to apologize before he leaves. Bobby chuckles and stands up, towering over Conrad. His blood pressure starts to rise. Conrad urges him to sit but he won’t. Alarms go off. A nurse comes in. Conrad takes blood before leaving.

Massero, Wilmot and Conrad go over Bobby’s tests. Massero comments to Conrad about how he argued with Bobby prior to his incident. Conrad tells him he won’t put up with the inappropriate behavior. Bell comes to see Conrad and tells him he is no longer allowed to go near Bobby or any VIP celebs he funnels into the hospital.

Bell goes to see Mina to inform her that he will assist her in a VIP surgery next month. Mina turns it down. Bell insists and tells her she has no choice.

Jude goes into the cancer patient’s lung to collect a biopsy of his tumor. Complications occur. He cuts the patient with a scalpel to get into the area.

Nic pulls Conrad aside. She is angry that he confronted Bobby. She can take care of herself. Nic tells Conrad that Jude perforated the cancer patient’s lung during the biopsy.

Conrad sees Hunter. She tells him that the patient is ready for chemo. Conrad disagrees. She doesn’t care.

Conrad goes to see Jude. Jude is angry with himself. He cost the patient 2 weeks of healing. Nic interrupts. Conrad leaves. Jude tells Nic that Conrad’s actions are because he still loves her. She needs to decide if she feels the same.

Mina waits for Claire and the other heads outside as they leave the hospital. Mina thanks them for letting her in on the VIP surgery next month. Claire looks surprised and angry.

Devon videos with Massero. He informs him that Bobby will need surgery and time to recuperate. He will miss a season. Massero tells Devon he needs him to inform Bobby. Conrad hides in the corner of the room. He guessed it right. Massero never wants to be the one to tell his celeb patients any bad news.

Priya and Devon are at home. Priya has found 4 new patients of Hunter’s. Devon asks her to keep it quiet if she looks after it. Priya wants to chase the story. He tells her to go for it.

Claire informs Bell that he cannot have assistance in the surgery next month. Bell asks as if he is okay with this news.

Devon tells Bobby the bad news. Bobby tears up. This was supposed to be his last season. Devon leaves. Nic comes in. She tells him if he sends her another pic she will send it to all the gossip sites. He apologizes to her.

Conrad takes Hunter’s cancer patient into surgery. The patient has a lot of questions. Conrad tells him the truth. The patient and his wife make a run for it. Conrad confesses that he slept with Noni. “I might have done it to get over you,” he tells her. She smiles. She hasn’t slept with Jude. Conrad asks her to tell him everything about Hunter.