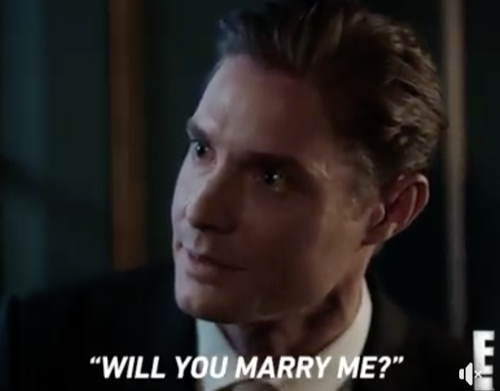 Tonight on E! The Royal’s airs with an all-new Sunday, April 8, 2017, Season 4 episode 5 and we have your The Royal’s recap below.  On tonight’s The Royals season 4 episode 5 called, “There’s Daggers in Men’s Smiles,” as per the E! synopsis, “Robert extends his power further than ever before and exiles a disloyal Cyrus; Eleanor undertakes a covert mission; and Helena explores her romantic options.”

Robert had put everything in place on tonight’s all-new episode of “The Royals” because he wanted to take a swipe at Parliament.

Robert was a king in a constitutional monarchy. His power as well as what he was allowed to say was limited. He couldn’t make demands on the people and he wasn’t supposed to have any political power, but Robert wanted to change that. He wanted to take some of that power he lost to Parliament back and he was using the back out to do it. The blackout was being blamed on an overheated system that Parliament knew about and chose not to fix. They may or may not have needed the funds for the other thing more important and therefore had a very good reason for why they couldn’t fix the system only Robert wasn’t saying that.

Robert claimed that they didn’t care about the people. The same people that had been most affected by the blackout had also been the poorest and so Robert had won a lot of acclaims when he decided to help them like he did. He had forced the army to stand down in order to take them all to the palace where they could have water and food. Things he said his family had plenty of and that as the father of the nation he had to make sure everyone had access to. Robert could be seen handing out water and sandwiches in front of the cameras. The cameras that were, in fact, buying into everything that he was selling so much so that they didn’t question it.

The journalists that were following the whole thing hadn’t asked if Robert was going too far meanwhile Queen Helena did question her son. Robert was going against everything she and his father had taught him yet she saw that she wasn’t getting anywhere when she had tried to warn him about this. She told him that he was supposed to be neutral and that he should probably let up on Parliament soon because they needed them. The government could decide to become a republic tomorrow and Helena told Robert that they should be careful or they’ll end up like Marie Antoinette if that day ever comes.

Eleanor just thought differently. She agreed with her brother’s opinions on Parliament and what happened essentially on their watch. Eleanor said Robert was doing more than they ever could and so the only one that had misgivings was Helena. Helena warned her son to be careful and then he went and did the opposite. Robert had been talking to Willow about how he wished he could do more and so she had been with him when he later held a press conference. The press conference was him stating that he was disbanding Parliament which was allowed to do because of their country’s constitution.

Robert said that until the government was willing to put the best interest of the people first, he would have no other choice than to stop Parliament from coming together and so Robert sorta made his constitutional monarchy more of an absolute monarchy. He now had all the political power in the world to fix things he claimed he was going to fix and again the only one that wasn’t scared about what he did was Eleanor. Eleanor thought what he was doing was brave and so she supported his decision. She was telling her boyfriend how she wishes she could be more like Robert when their romantic bubble burst and Jasper was forced to tell her something.

Jasper told Eleanor about his father. His father was pretending to be an Italian count and was dating her grandmother in order to sponge off her, however, his dad wasn’t an Italian count and the closest he came to nobility was the fact his given name was Earl. Earl was hoping Jasper wouldn’t say anything about him and had been surprised to later see that Jasper had blabbed. He told Eleanor everything and she hadn’t cared. She said her grandmother was broke and so it didn’t matter what his father was planning because it is not like he could inherit anything from her. Not that duchie wouldn’t be able to handle herself.

Eleanor couldn’t forget her grandmother killed someone and so she didn’t care what happened. She also wanted to meet Jasper’s father and so she introduced herself to him. He had been caught off-guard and had tried to say he was sorry for charming her yet Jasper wasn’t having it and had told his dad to run back to Mandy. Mandy was Jasper’s ex and she also slept with Eleanor as it turns out, so Eleanor informed Earl that was something they had in common because they had all slept with Mandy and then she invited Earl to tea. He had gone along with it and before long the two were forming a bizarre friendship.

Earl had shown her had to pick a lock and had even given her idea. Eleanor had been trying to find a way to help people without having to go through all the red tape and so she decided to steal her own silver candlesticks because there was an elderly woman that could perhaps fence for them for the cash. Eleanor had learned quite a few things from Earl and she could see that it was bothering Jasper. Jasper couldn’t forget how his father was never there for him when he needed him and he didn’t fully listen to Eleanor about how his father being there wasn’t a problem. He decided to take over at watching the surveillance cameras and he spied Eleanor sneaking out of the palace.

While Eleanor was sneaking off helping people by stealing from her family, her family was facing its own problems. Robert had performed a giant task and so his mother thought he would need her. She sadly found out differently when Robert told her to relax because she didn’t have to worry anymore and Helena hadn’t been able to do that. She knew she was becoming obsolete and that it would just get worse as Robert gets married then have children. Helena was complaining about how she would have to curtsey to her own grandchildren when her secretary told her that maybe she should go out and have fun.

Helena didn’t think she could do that and keep a hold of her decorum, so her secretary decided to prove her wrong by taking her to a club dependent on secrecy. Everyone that went there had to wear a mask and so Helena enjoyed herself. She went on to sleep with Prince Sebastian who had once been interested in her daughter and so she was so freaked by that she didn’t think about how there was going to be a new queen. Helena also hadn’t known that Willow had changed her mind. Willow had told Robert that she wanted to be on her list and that’s why had invited her to be there when he disbanded Parliament.

Robert later saw had scared Willow was about being that close to power and so he talked to her about why he put her on the list. It wasn’t just because she would make a great candidate. He had also picked her because he liked her and, despite everything, he wanted to be able to fall in love as well as be dutiful. So that had been enough for Willow. She had gone out to defend his new policy based on the situation and she was so composed that Robert didn’t care about his other candidates calling him. He liked Cassandra and still hung up on her when he saw Willow’s press conference because he said that’s when he knew.

Robert said he wanted to be the man she talked about in front of everyone and that’s why he made a few decisions. The first thing he did was banish Cyrus into exile because Cyrus wouldn’t let go of his petty grudge and then he talked to Liam. Liam had defended Robert to Cyrus and admitted that the only reason he wanted to hurt Robert was that of Kathryn. He was still in love with Kathryn and, once Robert had banished Cyrus, he told Liam that he had his blessing to pursue things with her. He let his brother know that he believed Liam could fix the past with Kathryn and that they could be happy together if Liam wanted it. And so Liam did go to Kathryn.

Liam told her that he was fighting for her and, back at the palace, Robert told Willow that he didn’t want her on a list.

He told her that he wanted her as his wife and so he proposed on tonight’s all-new episode!