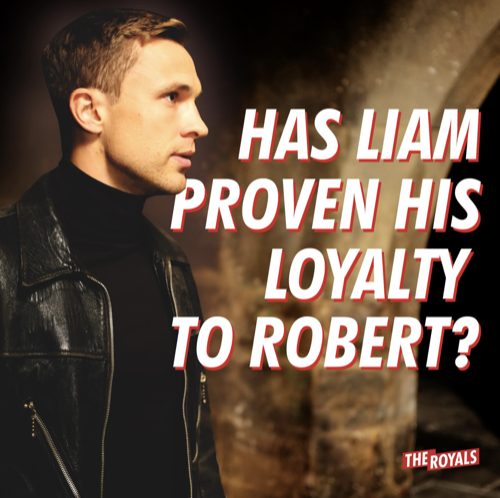 Tonight on E! The Royal’s airs with an all-new Sunday, May 6, 2017, Season 4 episode 9 and we have your The Royal’s recap below.  On tonight’s The Royals season 4 episode 9 called, “Foul Deeds Will Rise,” as per the E! synopsis, “Liam’s true intentions are revealed; Jasper helps Liam with a plan; and Willow and Robert hit a rough patch.”

Liam never changed! He hadn’t stopped working to undermine his brother and had staged everything to make Robert trust him just so he could get close enough to destroy him on tonight’s all-new episode of “the Royals”. Liam wanted to take down his brother and had people like his girlfriend and Cyrus helping. His Uncle Cyrus had pretended that he was disappointed when Liam hadn’t wanted to continue working against Robert and so he went into exile knowing that Liam would somehow find a way to bring him back. It was a smart play and they had fooled everyone into believing it was real.

Cyrus had even made friends at the foreign embassy he had been exiled to because he knew he would need people that wouldn’t go running to Robert. Robert also hadn’t helped his case when he went after Kathryn. Kathryn had thought everything was innocent that first night when Robert talked to her and so she told Liam she wanted to help when she realized she was wrong. Robert had come onto her and had kept coming onto her because he wanted to push her into wanting him too, but that’s not how attraction works and so Kathryn pretended to be giving in because she was planning on taking him down.

Liam wasn’t working against his brother to ensure that Robert became a better king. Liam was working against him because he planned on replacing him and so everyone that had joined his side knew what the phase of their plan was. They just thought they were ahead of everyone and guessed differently until Liam and Cyrus made a mistake. They trusted their new friend Aston Lange at the embassy to help them prove Robert caused the blackout and Aston said that he could only do that if they got to Martin Caine’s home. Caine was the man that helped Robert and he would have proof on his hard drives.

All of that had been true however Aston told the boys to go to the man’s house when it was supposedly empty and that had been a lie. Their new friend knew the house wasn’t empty because he’s been informing them to Queen Helena. Helena had suspected she was wrong about her son the King when Liam warned her about him and had even threatened to disinherit her. Helena hadn’t been sure if Liam was telling the truth and so she decided to watch Robert. She’s been keeping tabs on him and she suspected something was wrong when the blackout occurred. Helena thought that was a little too convenient for Robert and that’s when she turned to Aston.

Helena had used Aston before when she tried to take down another tyrannical king and she had placed him at that embassy because she suspected that Liam hadn’t changed allegiances. So she played things safe until it was time to fill in her son that she wasn’t blind. Helena knew that Robert was heading down the wrong path and so she was willing to work with Liam to remove him from his throne. She was so willing in fact that she had been prepared to put herself out there. Helena knew Martin Caine was a womanizer and so she agreed to lure him away while the others go through is computers. And so she tried to stay focus on her plan because she knew she would have to seduce someone and she hadn’t been counting on disappointing Eleanor.

Eleanor was outed as “the Hood”. She didn’t know how she was caught at first because she knew she had been careful and so she came to suspect her mother. Helena was the only other person, besides Jasper, that knew the truth. Eleanor thought she could get her mother to admit what she did if she confronted her and so she went barging into Helena’s rooms and she caught her mother with someone. It hadn’t been Martin Caine that time (thankfully) and instead, it had been Sebastian. As in Eleanor’s friend Sebastian. She had been hurt when she saw her mother sleeping with her friend and had pushed her mother away because she was tired of being lied to.

Eleanor had been so upset that she went to go smoke pot afterward and ran right into Willow. Willow was having her own doubts about Robert because he had asked her to be seen and not heard, so she truly questioned marrying him at all when she found out he had disbanded parliament forever and hadn’t told her. She went to him angry and they argued. They would later makeup and he would promise to talk these things through with her however not everyone was onboard with talking things through. Helena later learned that it was Sebastian that told Robert what Eleanor was doing and that Sebastian had been reporting everything to Robert for some time now.

It was Robert that betrayed his sister and she hadn’t known that when Jasper talked her into siding with Liam. Liam was close to making his move and Eleanor was finally talked around into believing Robert was a bad guy. She knew for sure when she later talked to Willow and found out that Robert used words she and Jasper told each other to convince Willow to stay with him. And so Eleanor told Willow that she couldn’t marry Robert, he wasn’t a good guy and they were all going to take him down.