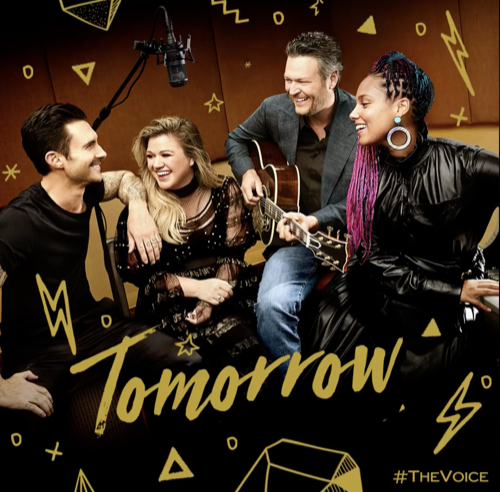 Tonight on NBC’s Emmy Award-winning musical competition The Voice airs with an all-new Monday, February 25, 2018, season 14 episode 1 and we have your The Voice recap right below.  On tonight’s The Voice season 14 episode 1, “The Blind Auditions Premiere” as per the NBC synopsis, “In the season premiere, the competition is fierce, the talent is exceptional and the surprises abound as coaches Kelly Clarkson, Alicia Keys, Adam Levine and Blake Shelton all vie to discover and coach the next singing phenomenon from the country’s best vocalists in the “blind auditions.” The vocalists compete to be selected by one of the coaches and fight for a chance to be named “The Voice.”

Welcome back to The Voice. This season we have a new judge, one of the biggest crossover artists of all time, Kelly Clarkson and she joined by returning coaches, Adam Levine, Blake Shelton and Alicia Keys. This season there is a game changer, there is a block button. Each one of the coaches can stop their rival coaches from getting an artist, but they have to make the most of it because they only get to use it once.

The first artist up tonight is Britton Buchanon singing “Trouble.” Blake, Adam, and Alicia turn their chairs, Kelly does not. Adam is so excited that he is standing up, but he doesn’t have a chance because Blake blocked him. Adam: “I think one hundred percent you have to go with Alicia Keys, I am such a fan of hers.” Alicia: “Your voice has so much honesty, there is something genuine about you. I would really like to help you out.” Blake: “You are so intense that it is almost like you are angry at the song. I love the raspy tone and that little bit of country. I did block Adam but that is because I want you on my team.” Britton chooses Alicia.

The next artist is Brynn Cartelli singing “Beneath Your Beautiful.” Kelly and Blake turn their chairs, Alicia and Adam don’t. Kelly: “You’re the absolute first person I have ever hit my buzzer for. I love your voice, you have a lot of different elements to your voice.” Alicia: “You have such a beautiful voice.” Adam: “It’s kind of exciting that Blake turned, but if Kelly doesn’t get you there is something wrong with the world.” Blake: “It is Adam’s mission to derail me. I have had more success with young females on this show and Kelly has no experience.” Brynn chooses Kelly.

Rayshun LaMarr is a cancer survivor singing “Don’t Stop Believing.” Adam and Alicia turn their chairs, Blake and Kelly don’t. Adam: “I’ll be straight up with you, 99.9 percent of the time we say I can’t believe this is a white dude and this time I can’t believe you are black.” Kelly: “It’s awesome to turn around and see someone living what they are singing. I’m so mad that I didn’t turn around, I love you.” Blake: “Congratulations on making it through cancer, you deserve this moment.” Rayshun chooses Adam.

Kyla Jade, a former backup singer for Jennifer Hudson, is singing “See Saw.” Blake and Kelly turn their chairs, Alicia and Adam don’t. Adam: “That was really good.” Alicia: “Those notes you were hitting, it was flawless, and the easy way you were doing it was spectacular. I am so happy for you.” Kelly: “I love that song, your hair and your look, I know Blake has won a lot but I have won a competition. Blake is going to be charming but I am the best pic.” Blake: “I want you on my time so bad. Let’s do this thing, let’s win this show.” Kyla chooses Blake because Wynona Judd was the first person to ever give her a chance.

Blaise Racugglia, a Christian rock singer who started his own ministry, is singing “Wanted.” Nobody turns their chairs. Kelly: “The one thing that made me think about pushing the button is that you have around tone, it would just get pitchy in certain places.” Blake: “There is a lot on your mind and a lot happening up there, it wasn’t put together as tightly as it could have been.” Alicia: “Super proud of you, you did a great job and I’m excited about your future.”

Kelsea Johnson is singing “Like I’m Gonna Lose You,” to honor her recently deceased grandfather. Adam, Alicia, and Kelly turn their chairs, Blake doesn’t. Blake: “My ass needs a kicking for not turning around, that was really good.” Adam: “I’m so mad because Alicia turned around. You are absolutely stunning from the way that you sing to the way that you look.” Kelly: “Hands down you could have a record right now, but as your coach, I can help you.” Alicia: “You have a gift and reason why you were given it. I believe we can win The Voice together.” Kelsea chooses Alicia.

Drew Cole, is a bartender who works at a movie theater in Los Angeles, he is singing “Sex and Candy.” Adam and Blake turn their chairs, Kelly and Alicia don’t. Adam: “Thank God for you, you have the voice. When I turned around and saw you, I like to think the reason you did that song is that I did a cover of it.” Blake: “I know I’m a country artist but I can work with anyone, I see a cowboy hat on your head and I like that. I would like to be your coach dude.” Drew chooses Adam.

D.R. King is a former school teacher singing “Believer.” Kelly and Blake turn their chairs, Adam and Alicia don’t. Kelly: “I love that you brought your soul to that song and killed it. Your runs were sick, I think you have way more than we heard. My biggest thing is believability, you can’t teach something that is so innate, this is your gift and I think we can do something fantastic together.” Alicia: “You are a super special man, something magic is going to happen.” Blake: “Your voice is explosive, you have a natural gift, I was feeling it. I would be beside myself if you picked me as your coach.” D.R. chooses Kelly.

Kaleb Lee, a country singer who grew up on a farm, is singing “Never Wanted Nothing More.” Kelly and Blake turn their chairs, Alicia and Adam don’t. Kelly: “I love country music. I know enough about country music. You should shock everyone and choose me.” Blake: “Your voice kind of reminds of Texas red dirt style. Your voice stands out and will be amazing on country radio.” Kaleb chooses Blake.

Makenzie Thomas, who grew up listening to gospel and R&B, is singing, Nobody turns around. Adam: “There is so much magic in your voice, you are fantastic.” Kelly: “I’m just going to be real, you are so unexpected which I think is fabulous about you and is going to make you stand out.” Alicia: “You’ve got such a vibe, such an energy and you are totally not what I was thinking would turn around to me.”

The final performance tonight is Justin Kilgore, singing “Tomorrow,” All four judges turn around but Blake is blocked and both Kelly and Adam dance all over the letters. Alicia: “I did use my only block for you because I knew your voice was special. You move my spirit, I definitely have a vision for you, congratulations on a beautiful performance.” Kelly: “How did you get into country music?” Justin says he was influenced by Reba McIntyre. Kelly: “That is so weird, she is like my inlaw – do you all know Reba? I was in a duet with her, we had like a hit. Her grandchildren are my children.” Adam: “I won’t even be mad if you don’t choose me because you can’t choose Blake.” Justin chooses Kelly.