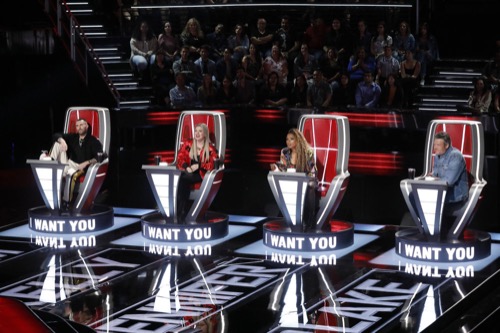 Tonight on NBC’s Emmy Award-winning musical competition The Voice airs with an all-new Monday, October 1, 2018, season 15 episode 3 and we have your The Voice recap right below. On tonight’s The Voice season 15 episode 3, called, “The Blind Auditions, Part 3,” as per the NBC synopsis, “The blind auditions continue.”

The first contestant tonight was Dave Fenley. He was from Nashville and he was a country singer. He chose Travis Trent’s “Help Me Hold On” for his performance tonight and so he really wanted Blake to turnaround him however he said even if he couldn’t get Blake that he wanted Kelly. Kelly has proven in the past that she knows country music and that’s why she hadn’t waited until the last second like last week to press her buzzer. She pressed that buzzer in less than a minute into the song and eventually, Blake joined her. They had loved the song that Dave chose and they liked that Dave said he was willing to cross genres. He showed that he was versatile and so Kelly tried to play into that.

Kelly said that she was willing to cross genres and she reminded Dave that there was nothing wrong with pop because pop was short for popular. Kelly also reminded Dave that she’s technically never lost on the show and so she believes she could go far with him however Dave had a promise. He promised his mother to get her a hug with Blake because he was a huge fan of the country star and Dave hadn’t wanted to break his momma’s heart. He decided to go with Blake and Blake fulfilled his promise of hugging Dave’s mother. She had been so happy to get her to hug that the choice had been worth it. The second contestant tonight was Steve Memmolo. He was from Boston and he liked to sing soul.

Which was great, by the way, because Steve had a voice made for the soul. He chose to sing “Spooky” and at first, the judges had been wary about him but the moment he hit that high note they knew. Both Adam and Jennifer had turned around for him and they had been surprised much like the other remaining judges were eventually surprised when they realized that Steve was white. His voice hadn’t seemed like he was white and so that had thrown everybody. They knew that Steve’s voice was deep and had rhythm and so the judges had both vie to have him on their team. They each made their case and one of them was ultimately disappointed because Steve decided to go with Team Adam.

The third contestant had been the first woman for tonight. Her name was Audri Bartholomew and she was from St. Louis yet surprisingly she didn’t sing the song that her city was famous for. She chose to instead sing “Never Enough”. The original singer was a former contestant of the show and so Audri thought it would great if she sang it for her own performance. As a singer, she sort of rushed through the beginning of the song and Jennifer was mouthing to herself that Audri needed to take her time. She had waited a while before she turned around and by then she felt Audri had truly proven herself. Audri had truly been able to hit those high notes and afterward she sang the song with her new coach because every time Jennifer found someone for her team they wanted to sing with her.

The next contestant hadn’t even asked for anyone to sing her song. Her name was Rachel Messer and she was a true country girl from Fort Gay, WV. The teenager had decided to sing “ I Want To Be A Cowboy’s Sweetheart” and had even thrown in some yodeling towards the end, so right away she impressed Kelly. Kelly was hoping for a country star and she kept on losing out on them whenever Blake also turned around. He had waited until the last minute with Rachel and it hadn’t taken much for him to win her over. She was denim like him, she liked the old country music as he did, and he said that he would take her very far. So, in the end, the choice hadn’t been that hard. Rachel decided to go with Blake. And the more this happened the less chance Kelly was ever going to get a country star.

The next contestant was Brent Morgan. He was from Madison and he works with musicians. He was familiar with writing tunes for other people and producing them but he wanted to be the vocalist and so he auditioned for this show with his own rendition of “Feel It Still”. The song had sounded good. There hadn’t been anything wrong with how Brent sang it and so the only thing that needed some work was the confidence. Brent had lacked the wow factor that they were looking for and so the judges later advised him to try again next season. They all wanted to like him and they think if his vocals were stronger than they would have turned around. And so Brent was the first to be rejected tonight if not the last.

The next contestant had been a young teenager. Her name was Chevel Shepherd and she was the city of Farmington. Chevel was sixteen and wanted to be a country music star. She sang “If I Die Young” and there was a twang in there that was reminiscent of both Dolly Parton and Sandra McLachlan. Kelly had picked up on that and she told Chevel that it meant a lot of songs were opened up to her now. Chevel had taken in everything that Kelly said and that’s what convinced her to go with Kelly as a coach. Both Jennifer Hudson and Blake had a turnaround for her and she could have gone with Blake which had been her original plan though Kelly’s vision for her future had just seemed a little more tangible.

The next contestant had been Bryan Cherry. He was from Woodbridge and had chosen to sing “Nothing Can Change This Love” but the judges hadn’t been sure if the song had fit him or if his voice needed more work. They didn’t turn for him this time around and so they reassured him that they could come back next year. The following contestant was Delaney Silvernell. She was from LA and had chosen to sing ”In My Blood”, only there was one judge she impressed almost instantly. Kelly had loved the song that Delaney chose and she had been glad that she won Delaney by default because she had been the only one smart enough to turn around. And she was the only one that won someone for their team that way.

The next contestant had been Anthony Arya. He was very much into alternative rock and had surprisingly chosen “Danny’s Song” for his performance tonight. Only Anthony made the song very much his own and he won over Adam. Adam had enjoyed the song and he loved hearing who Anthony likes to listen to because that just reaffirmed to him that he made the right choice. Adam had won Anthony by default and he could be one of his dark horses that makes it into his top five because no one else chose to bet on. But that was it for the guys, the last three remaining performers were all women and they each won in their own way. The first one up was Natasia Greycloud.

Natasia was from Nashville and she chose as her song “I’m Not the Only One”. It had been a great fit for her because it allowed her to impress the judges. She won over both Kelly and Jennifer. Natasia was originally going to go with the Kelly because that was the judge she loved and so it had come as a shock to her when Jennifer had also loved her. They both wanted her on her team and they hadn’t fought with each over Natasia because they said they respected each other too much, so Natasia got to make her pick solely on feeling and she decided to go with Jennifer. She had just liked what Jennifer had to say and she believed she could go very far with her.

The next contestant had been Lynnea Moorer. She had a great voice and so what sunk her had been her song selection. She chose “Location” and it had been a little too wordy. The judges hadn’t liked it and no one turnaround. Afterward, however, they had asked her to sing something slower and that song had been perfect for Lynnea. She could have had the judges fighting to coach her if she had just picked a different song and so while she didn’t get picked initially she was picked for the “Comeback Stage”. It gave her another chance of performing and so she hadn’t had to wait around for another season.

The last contestant of the night was Kymberli Joye. She was a gospel singer and would generally perform with a choir although she was actually really great on her own. She sang Whitney Houston’s “Run To You” and the sheer confidence she must have had to make that choice had won over both Kelly and Jennifer only Kelly hadn’t wanted to lose out to Jennifer again. She pressed her buzzer and from the beginning, she blocked Jennifer’s turn. Jennifer hadn’t realized it until she turned around and that’s when she knew that she had been stabbed in the back. It had come as such a betrayal that Jennifer had wanted Kymberli to pick the third judge that press their buzzer – Blake. Blake hadn’t blocked Jennifer and that’s who Kymberli originally wanted to impress. In fact, Kymberli later said that if she couldn’t have Jennifer that she would pick Kelly and so once again Kelly won by default.