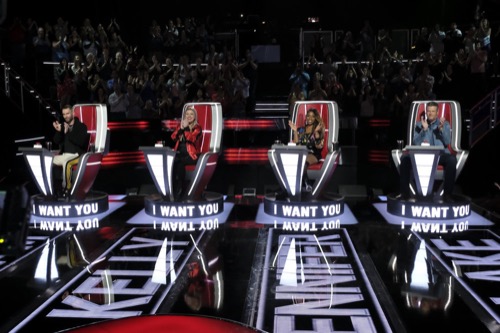 Tonight on NBC’s Emmy Award-winning musical competition The Voice airs with an all-new Monday, October 8, 2018, season 15 episode 5 and we have your The Voice recap right below. On tonight’s The Voice season 15 episode 5, called, “The Blind Auditions, Part 5,” as per the NBC synopsis, “The “Blind Auditions” continue as superstar coaches Kelly Clarkson, Jennifer Hudson, Adam Levine and Blake Shelton all vie to discover and coach the next singing phenomenon in the “Blind Auditions.” The vocalists compete to be selected by one of the coaches and fight for a chance to be named “The Voice.” ”

The third week of blind auditions began with tonight’s all-new episode of “The Voice”.

The judges decided to mix things up this time. They figured if they teamed up that they could get the people they truly wanted and so they turned the auditions into the battle of the sexes. Blake and Adam were a team and they were fighting the Jennifer and Kelly side, but if the judges teaming up were a thing then it made sense that the first audition of the night was a duo. The duo called themselves OneUp. They were actually a couple in real life and they were super cute. Adam and Jerome had met on the set of a music video and they’ve been together ever since. They truly complimented each other very and even the judges thought so when they heard OneUp sing “Could It Be I’m Falling in Love”.

This duo knew had everything. There was the baritone, the falsetto, and there was a tenor. The judges had liked it so much that three of them turned around. Kelly, Jennifer, and Blake all wanted this duo however the couple decided to take their chances with Kelly. Kelly had gotten them and she seemed to understand that their pairing was all about music which to them was more than the music. So Kelly got really lucky with the first pick! She won the duo because of sheer luck and so moving forward she tried to strategize. Kelly and Jennifer knew that going forward they needed cooperation from the audience and so while the boys were in the back wondering where the women were – the women were asking the audience to start shouting their names.

The audience played a part in which judge was chosen by the contestant and so the women did their best to make their case. They said they were just as good as the guys and that these artists very far. Though sometimes the judges hurt themselves when they fail to turnaround for certain contestants. The next contestant had been Natalie Brady. The rocker was from Nashville and auditions with the song “Barracuda”. She was good and she was able to truly grasp the grit that went into rock ‘n roll. Natalie’s voice had been so good that Adam had been shocked by some of the judges. He had turned around and so did Jennifer, only Blake and Kelly had kept dithering about it and so they missed their chance to win over Natalie.

Natalie ultimately decided to follow her rocker roots and went with Adam, but Kelly and Blake had dropped the ball with her and they went on to commit the same mistake with Hannah Blatlock. The country singer had a twang in her voice and could have easily transitioned into rock. She had just needed a judge to turn around for her and none of them ended up doing so. Blake and Kelly had fought about it in their chairs and the problem with them was that they overthought it. They both have someone on their team that sounded like Hannah and they weren’t sure if they should add her, so that gave Adam the idea that maybe he should press his buzzer and the song ran out as he was gloating about being the only one to turn around.

It was just one mistake after another and so the judges had been excited about being quicker the next time. The next contestant was Mike Parker. The young man was a football player back in high school and there had been plenty of colleges that were interested in signing him through his grades hadn’t been up to their standards. He thought if he could slack off in the classroom and it wouldn’t matter because he was a good footballer player. It was only afterward that he realized he made a mistake and so he had been disappointed. Mike had had a hole to fill and thankfully someone turned him on towards music. And so he auditioned tonight with the song “So Sick” and one of the judges decided to be smart about him.

Jennifer turned around for Mike and he had been so excited that he jumped up all around the stage before falling to his knees in prayer. Mike had been happy to get his second chance at following his dream and Jennifer had been happy about having someone so talented on her team. Now, the contestant had veered to a different lane with his music. Joey Green was from Crowley, TX and while there were elements of country music in his voice he also turned to be a rocker. He sang “Baba O’Riley” as his audition and two of the judges had liked the various ways his voice came together. Both Jennifer and Blake had enjoyed Joey’s audition and they both said that they could take him very far but he was still a country boy at his heart and so he went with Blake.

The next contestant had some fun up on the stage. Zaxai was from Brooklyn, NY and he could sing in five different languages as well switch up his genres. He came to audition tonight with “Come and Get Your Love” and before he could vision out the first verse – Jennifer pressed her buzzer. She loved Zaxai’s voice and she hadn’t wanted to lose him to another judge. So Jennifer blocked Kelly. She knew that Kelly would be interested and, when Kelly pressed her buzzer, she found out that her friend had blocked her. They both loved Zaxai’s voice and in all fairness, Kelly had once blocked Jennifer. And so Jennifer ended up winning Zaxai by default only he actually had a history with Kelly. He had been an usher at her concert and she accidentally kicked him in the back of his head.

Kelly hadn’t known that she did that and so she apologized to for kicking him. Plus, she also hugged him and told him that she really had wanted him on her team. Kelly missed out on Zaxai because she was blocked and that was something she truly didn’t need to worry about going forward because funnily enough, that had been the last block of the season. The judges were now free to pursue whoever they wished and the next contestant had been an interesting one. Jarred Matthew was an astrophysicist. He studied things like neutrons and was even developing something that could help with such particularly difficult field, so no one was expecting a modern-day “rocket man” would audition for the show or that he would do so well with “Tired of Being Alone”.

Jarred sang with excitement and happiness in his voice. He had been so good that both Blake and Adam wanted him, but he could only choose one of them. Jarred decided to go with Adam because Adam was more his style and as luck would have it that was just the start of a rough night for Blake. Blake it seems had lost the next contestant before said contestant could even official meet him. Erika Sade hailed from Miami, FL and she always knew that she wanted to be a singer. She grew up in musical household and had even seen Blake in person when she was eleven. The start-studded young girl had handed him a demo which he signed and then he made the mistake of handing it to another fan.

Erika has never forgotten that moment and so it was good thing that Blake hadn’t tried to vie for her hand. He and two other judged hadn’t turned around to catch Erika while they could and so Kelly won her by default. She heard the young woman’s voice and realized the singer had overwhelming control over her instrument. And that couldn’t be taught! Some of the other judges said they wanted to hear more emotion and Kelly just went “I got this” on them. She could help Erika to work on the emotion and she was glad that she won her while she could. Like Kelly had been so happy that she rubbed it in Blake’s face and so Blake admitted that he might have been drunk when he handed off Erika’s demo.

The next contestant had been Sam Robbins. He was from Portsmouth, NH and had started out as punk rocker. Sam had had a band and everything when he was younger, but then he started hearing seventies rock thanks to his dad and he found his thing. He auditioned with the song “Time in a Bottle” and it had been good. It just hadn’t been good enough for the judges and so Sam missed his chance with them. Luckily, he went on to get picked up by the Comeback Stage and so the night hadn’t been all a waste for him. The next contestant tonight had been Colton Smith. He called himself a diva and had wanted to impress Jennifer from the very beginning. So it was good choice for him when he picked “Alive” because he won over Jennifer without trying.

As for another judge, his luck managed to turnaround right when he needed it. Blake went on to pick Kayley Hill for his team. She was from Nashville and had auditioned with the song “Gold Dust Woman”. Kelly could have tried to turn for her only she missed her chance and Blake won a woman that wore a cape dress for tonight. Then when it look like Blake was once again sweeping the country music stars, he and the others were all blown away by Kirk Jay. Kirk Jay was from Bay Minette, AL and while there was some country to him there was also some rocker in there. He auditioned with the song “Bless the Broken Road” and was the first as well as the only person to receive all four chair turns.

Everyone had been impressed by Kirk Jay and when they heard from the man himself that he was all country – Adam decided to ignore his own bid and told Kirk that he should definitely go with Blake.

So was it all that surprising when Kirk Jay decided to pick Blake?