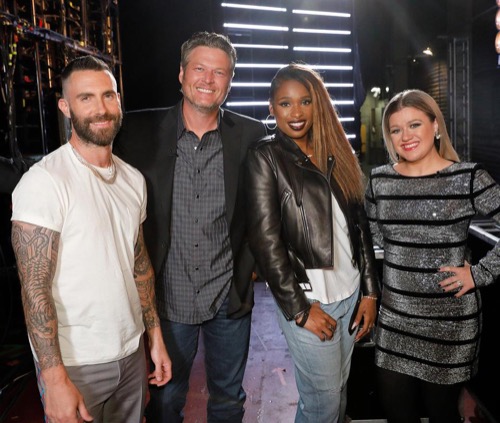 Tonight on NBC’s Emmy Award-winning musical competition The Voice airs with an all-new Tuesday, October 16, 2018, season 15 episode 7 and we have your The Voice recap right below. On tonight’s The Voice season 15 episode 7, called, “The Blind Auditions, Part 7; The Battles Premiere,” as per the NBC synopsis, “The “Blind Auditions” conclude and the “Battles Rounds” begin. The coaches enlist music industry powerhouses Keith Urban, Halsey, Thomas Rhett and CeeLo Green to prepare their artists for the “Battle Rounds.” In each round, the coaches put two of their own team members against each other in a duelling duet.

After the vocal face-off, each coach must choose which artist from their team is the strongest, and has the option of stealing losing artists from an opposing coach. Each coach has two steals during the “Battle Rounds.” Winning artists will proceed to the “Knockout Rounds.”

The blind auditions were coming to an end as each coach was one artist away from completing their team on tonight’s all-new episode of “The Voice”.

The first artist of the night was Emily Hough. She was a teenager from Petersburg, IL and her whole town likes to listen Blake, however, she said she liked to listen to songs with a more folksy vibe. Emily put her own spin on the song “Big Yellow Taxi” and she interested three of the judges. Adam, Jennifer, and Blake had all turned for Emily because of this song and they all tried to win her over. Only Blake lost her when he had shot down the Beatles because that was pretty much Emily’s favorite band and well Jennifer never had a real chance. She was a different music style while Adam was a perfect fit for Emily and that’s why she chose to go with Adam. He completed his team on the very first artist and so he was done with the blind auditions.

The second artist of the night was Josh Davis. He was a personal trainer from Cleveland, TN and he actually had a musical history. He was once in a boy band and the band had broken up because the guys weren’t being what their label wanted them to be, but since then, Josh took some time away from music to broaden his horizons and he’s learned to sing on his own rather than rely on his band. So coming to the show tonight, he was prepared for the judges and hadn’t wanted to waste another opportunity. He chose ”Too Good at Goodbyes” for his audition and immediately won over both Kelly and Jennifer. The two women needed someone that could hit those high notes like Josh and Kelly for one needed a guy because her team was filled with women.

Both Kelly and Jennifer wanted to wrap up their team with Josh, however, they hadn’t wanted to fight each other and so the judges had played around a bit with both Blake and Adam filling in to fight for the girls. They made great cases for the both of them and so the decision ultimately came down to what Josh wanted. And he wanted Kelly. Kelly was the second coach to fill her team and as the show went on neither Jennifer nor Blake showed that they were willing to settle. They each wanted someone to wow them and unfortunately, that hadn’t been the third artist. The artist’s name was Lisa Ramey and she was from Brooklyn, NY. She sang “Beautiful Trauma” for the judges and sadly she didn’t have what the remaining judges were looking for.

Katrina Cain, on the other hand, was someone that all four judges wanted yet only one could have. The artist was from Denton, TX and that might explain why her voice sounds like she could do country even as she was more into electric pop. But she did jingles for country music and so she could switch genres fairly easy. An example of that would be the song she chose. She sort of deconstructed “Rhiannon” in order to make it her own and, while it wasn’t in the electric pop or even pop, it fit her so well that impressed all four judges. Both Jennifer and Blake turned around for her and if they had the chance then Adam and Kelly would have turned around as well. And so it went without saying that she was a four-chair turn.

Katrina was really good and the remaining judges each wanted her on their team, but she chose to go with Blake and so that left only Jennifer with a seat open. The star wanted someone to wow her and she got lucky because the next artist did just that. She heard Matt Johnson from Stanton, VA and the way he sang ”Never Too Much” had impressed her enough that she used her last seat to get him. He sang  a legend song and that was enough for Jennifer because it showed that he wasn’t afraid to take risks. It also didn’t hurt that he was experienced. He was used to having to sing in front of crowds and that alone will ensure he won’t have any sudden nerves on the stage. And with Matt joining Jennifer’s team, all the seats filled.

It was now time to move onto the battles!

The first battle of the night was going to TEAM Kelly. She brought in Thomas Rhett to help and together they prepared her powerhouse set. Kelly chose Sandy Redd and Cody Ray for her first battle. She said they were the strongest vocalist on her team and that it would a battle of the Titans if they sing against each other, so their set was definitely going to blow everybody out of the water and it might even be too much for Kelly herself. She listened to their practice sessions and she loved them together. She also loved them apart and loved having them on her team. Only she knew that she would have to lose one of them at the end of the set and so she struggled with her decision the whole time.

Kelly was perhaps the most fidgety person. She couldn’t sit still as she heard her two artists sing out and afterward she took the longest time to come to a decision. Like the show had to go on a commercial before she came to a decision, but when she was ready to talk, she chose to save Cody Ray. He won the battle in her opinion and as a coach, she was one of the lucky ones because Kelly knew that the other judges would steal Sandy Redd. Which was true because literally, all the other judges jumped at the chance to have her on their teams. No one hesitated and they all tried to make their case with Sandy Redd. And the artist chose to go with Jennifer Hudson because she liked what Jennifer said about letting her pick which direction she wanted to go in.

The next battle tonight was with TEAM Blake. He had Keith Urban helping him and the judge chose to start his battle with his two work-horses. Blake picked Michael Lee and Joey Green for his first set. He liked their styles and he thought that they would be great with the song “Thing Called Love”, except Keith helped him to see the small problems with the both of them. There was Michael was too controlled and in the opposite corner, there was Joey who was too relaxed. They both needed to work on what they had an abundance of and in doing that they ultimately sounded like they were ready for a concert. And so once again a judge had made it hard on themselves because they could only pick one.

It didn’t help that that the two guys were friends. They had known each for eight years and so they were hoping that if one got picked that the other would then get stolen by someone else though sadly after Blake picked Michael there hadn’t been anyone willing to steal Joey. The others had wanted to hold off on using their steal because they weren’t sure if there was going to be someone else they’d rather have on their team. So Joey was eliminated tonight. Maybe he’ll come back one day and maybe he won’t only he didn’t seem like the type that was going to give up on his music anytime soon. And so hope remains!

The next battle was the last of the night. TEAM Jennifer had called on Halsey to help her with her team and together they helped rework a Blake Shelton song for Colton Smith and Patrique Fortson. The song was called “God Gave Me You”. It was completely out of both guys’ field and so not only were they going to try gospel but they were going to do it with a traditional country song. The guys had been worried by that and so they didn’t begin to feel confident until they were in practice together. There they learned to how to stretch their voice even further and they gave such a wonderful performance that everyone including Halsey had been proud, She thought they didn’t sound like newbies at all and that’s what everyone said. They loved both guys and so Jennifer hadn’t wanted to lose either one of them.

Jennifer wavered a bit before she eventually said the winner of this battle was Patrique. And thankfully she didn’t have to worry about Colton because Blake stole him and Blake hadn’t hidden the fact that he believed that Colton won that battle!