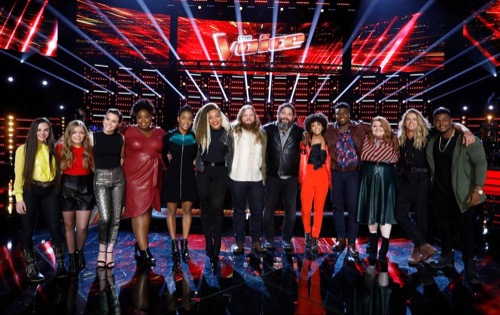 Each contestant had to dedicate their performance this week. This week was technically the Dedication’s week and it was about making each performance personal on some level. It was supposed to give some insight into the contestant, however, some of them chose to dedicate the performance to worthy causes. The first one up was Chris Kroeze from Team Blake. He was from Wisconsin and a young girl from his hometown had been kidnapped. Chris had followed the story and he chose to sing the Beatles “Let it Be” because of it. It was unfortunate that things like this happen and sadly these cases tended to be in the news for about a day before people slowly forget about it, so Chris didn’t want anyone to forget this story or lose hope. And it had been a great performance by Chris because it had been such a sweet moment.

The next contestant had also been sweet. Tyke James was from Team Adam and he chose to dedicate his performance to his mother. He actually calls his mom by her name because he said they’ve known each other for years and so there was a funny side to him that hadn’t been explored before. Tyke was simply known as the Hawaiian guy and Adam had wanted to take Tyke back to his relaxed roots, but with a spin and so that’s how they came to choose the song “I Do It For You” by Bryan Adams. They teamed it with a ukulele and Tyke was able to make the song his own. It didn’t sound forced and instead, it reminded the judges what they liked about Tyke. And Kelly Clarkson had even said that it was his best performance.

Next up was DeAndre Nico from Team Adam. He chose to make a dedication to his girlfriend who sadly suffered a miscarriage while DeAndre was going through the Knockouts and DeAndre never forgot how strong was as she was going through on her own because he was so far away. He chose the song “I Can Only Imagine” by MercyMe and dedicated this gospel song to Crystal because for her he turned into a love ballad. It was a huge production with the orchestra in background and DeAndre on piano yet he once again proved he could literally anything with that smooth voice of his. It had Jennifer Hudson stand up and take notice of him. So this song was perfect and no one stopped singing Crystal’s praises.

The next contestant had been Kymberli Joye. She came from Team Kelly and was singing Rihanna’s “Diamonds” but with a twist. She and Kelly had talked about it and they wanted to make the song a little melancholy because Kymberli had a great voice for it. She was more known for those high notes and people tended to overlook how well she could sing the song softly. Kelly wanted to change that and that’s why combined those two aspects of Kymberli’s voice. Kymberli was singing in honor of her younger sister who also wanted to be a singer herself and so Kymberli just wanted her sister to know that anything was possible. And that they didn’t have to look a certain way to make those dreams come true.

Only this next contestant struggled with connecting to her song. Kennedy Holmes had a great amount of talent and control over her voice though she’s been told a few times by her coach that she was struggling to connect with the music. Kennedy chose the song “Wind Beneath My Wings” by Bette Middle because she wanted to dedicate her performance to her parents and for an emotional song it was just a little bit too perfect in practice. Jennifer kept telling her that she wanted Kennedy to feel the notes and relax into it. Kennedy tried a few times and eventually she had to get her parents in there during practice for her to remember that this song was supposed to be about love. And only then did she give such an amazing performance that all four judges stood for her.

Team Jennifer continued on with SandyRedd. She wanted to dedicate her performance to her mother who passed away some years ago, but who will never be forgotten and so the singer chose the song “It’s So Hard to Say Goodbye to Yesterday” by Boys II Men. It was so an emotional song and SandyRedd hadn’t been able to contain her tears. She missed her mother every day of her life and no one knew that better than Jennifer. Jennifer told SandyRedd to let loose and so her voice was full of love as well as sadness. And her performance was one of the greatest performances tonight because it had been so touching and there hadn’t been a dry eye in the house. The judges all loved themselves some SandyRedd and she remains memorable.

The next contestant had been Chevel Shepherd from Team Kelly. Chevel was the last female country musicians left this season and so the song she chose definitely made her stand out. She chose the song “Little White Church” by Little Big Town because it was her father’s favorite country song and she was dedicating her performance to him tonight. Chevel was very close to her dad and considered him to be her best friend. So she chose the song in honor of him and learned how to rock out to this song. Cheryl was known for being sweet and she showed how well-rounded she could be when she began singing about the guy that wasn’t worth it. And so the judges loved seeing this other side to her, and they also enjoyed how sweet she still could be even as she was rocking out.

MacKenzie Thomas wrapped things up for Team Jennifer. She wanted to make her performance special and so she dedicated it to her coach Jennifer Hudson with one of Jennifer’s songs. MacKenzie chose the song “I Am Changing” from Dreamgirls and it really brought her out of her shell. She was advised not to sing like how Jennifer sang it and that she should make the song her own. So MacKenzie rearranged the song to her own liking and she gave a beautiful performance. It had a wow factor and the usually soft-spoken Makenzie came across as a powerhouse. It was so good that Jennifer said that her next performance was going to be dedicated to Makenzie, so there really was no higher honor than that from her coach.

Team Kelly went next with Sarah Grace. She was the young singer with an old soul and her once that again tonight with her performance of “Goodbye Yellow Brick Road”. It was an Elton John song and no one normally heard on the show, but Sarah Grace went a school for the Performing Arts and she wanted to dedicate her performance to her friends. The same friends that would know some of these old songs that no one would assume would fit and yet it does. Sarah played the song while she was also on the piano and she showed off a variety of skill. Her coach even said after her performance – there was no one out there like her and she was so amazingly talented that it was almost a crime.

The next contestant was Dave Fenley from Team Blake. He was the last rocker that Blake had and he almost lost him because America hadn’t voted for Dave when they had the chance. Only Dave said that he was singing a lot of the old songs that the younger generation had never heard before and so he wanted to mix that up with the song he chose for tonight. He picked “Hard to Love” by Lee Brice and was dedicating it to his wife. She’s been put through a lot because there was a while in which Dave was on the road and drinking a lot yet Dave said that he was a better man because of his wife and that’s why she deserved to have a performance dedicated to her. And it had been a  great performance because Adam got upset again when he remembered that people hadn’t voted for Dave last time.

Up next was Lynnea Moorer. She was the comeback kid because she worked her way up on the new show “the Comeback Stage” and so this talented young woman almost slipped past the judges. But when she came back, she had had her pick and she chose to join Team Kelly. Kelly loved Lynnea and her whole vibe. There was a relaxed confidence to the singer and it showed more with her performance of  “Wolves” by Selena Gomez. It was dedicated to her mom and how much her mom did to protect both of them except this performance was more than a mere tribute. She was likened to Rihanna because of this performance and the judges fell more in love with her after her performance. And so Lynnea could be the dark horse no one sees coming until she ends up in the Final 3 or wins it all.

Kirk Jay from Team Blake had been next and he too was a fan favorite. He had country music welcome him as one of their own and he picked the songs that were great for his voice. He “I’m Already There” by Lonestar in honor of his mom and again he put his own spin on country. There was even a moment where he yodeled in the song and it just somehow worked. It had been amazing performances and all four judges stood up for him. He also won over Jennifer Hudson because she said she was his biggest fan and couldn’t help gushing about him. It had got so bad that she apologized for pulling a Kelly and speaking over her time. And so Kirk Jay had fans from who weren’t traditionally fans of country music.

The last contestant to perform tonight was Reagan Strange. The teenager chose the song “You Say” by Lauren Daigle because she sang it a few weeks back in church and it had made her grandparents cry. So Reagan decided to dedicate this song to her grandparents. They were active in her community and she loved them and wanted to show her appreciation. Its just no one was expecting that little Reagan could fill the auditorium with her voice and she surprised them when she did just that. She had a voice that was sweet and could reach out to everyone. And while Adam didn’t have a lot of time to voice his opinion, he did tell Reagan how proud he was of her.