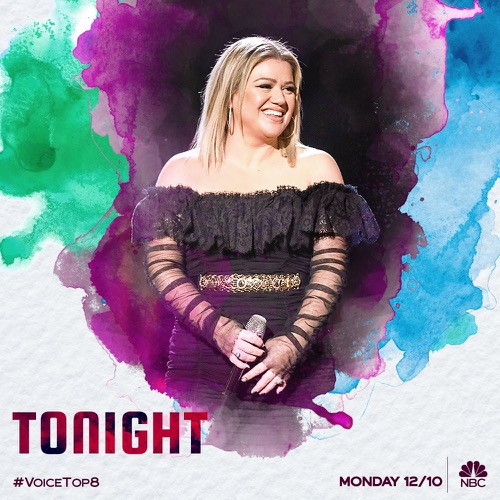 Tonight on NBC’s Emmy Award-winning musical competition The Voice airs with an all-new Tuesday, December 10, 2018, season 15 episode 23 and we have your The Voice recap right below. On tonight’s The Voice season 15 episode 23, called, “Live Semi-Final, Top 8 Performances,” as per the NBC synopsis, “The top 8 artists perform live in front of coaches Kelly Clarkson, Jennifer Hudson, Adam Levine and Blake Shelton for America’s vote. Plus, the artists team up for competitive mashup duets.”

For everyone that’s been following the show since the start of the season – Welcome to the Semifinals!

The eight remaining contestants were going to be performing twice tonight. They would have their moment to shine with their solos but they also had duets with the other contestants and so the second half of their performances was all about whether they could collaborate well together. It took a lot to make it into the business and so each and every part of the “The Voice” was a test. The first contestant to experience the test for tonight was Sarah Grace. She has such subtle tones to her voice that she and her coach both tried to highlight it. Sarah Grace performed Harry Styles’s “Sign of the Times” and she accompanied herself on the piano because she truly is a well-rounded musician. And it had been another great performance from the musician.

Sarah Grace was an excellent example of control. She has such restraint when it comes to her voice that the judges always mention it when they talk about her however that was just one out of the two performances. The next performance had been a duet. Kennedy and Reagan have never battled each other or have even sung on the same stage before and so tonight was a first for them. The two teenagers were the youngest in the competition and they decided to get creative with their duet. They chose to sing a mashup of Pharell’s “Happy” and Janelle Monae’s “Tightrope”. It was fun and it played well because the girls’ friendship was something they took with them into the performance. And, well, performances weren’t really going into an order.

The next vocalist was MaKenzie Thomas. She proves to her own coach that she could take on the tough songs that were sung by the greats and hit all the right notes, so she chose the song “Vision of Love” by Mariah Carey. It had been another bold choice for MaKenzie and she did great things with it. She was perfect for this song and it sounded like an original when she sang it. The judges had enjoyed this performance so much they all gave MaKenzie a standing ovation! They called her rendition her best performance yet and it had also been their personal favorite because they had been just as proud of her as her own coach. And so MaKenzie’s performance was the one the rest of them needed to beat.

The next performance was a mixture of country. Kirk Jay and Chevel Shepherd were the two most well-known country stars this season and they decided to showcase a different form of country. They did a mashup of country rock. It was two songs that people probably wouldn’t recognize if they weren’t fans of country though somehow these two took their mashup mainstream. It had been a great rock song and both Kirk and Chevel had had some fun with this song. They were great performers in their own right and so their duet had been amazing to watch. Their respective coaches both gave them a standing ovation and so that was very much a Country “A” rating from people in the know.

Then there was Kymberli Joye. She never fails to take the crowd back to church and she did so again when she performed “Never Alone” by Tori Kelly. It was a fairly new song that many haven’t heard before and so Kymberli got to make this song her own. She came in with the band a choir and it had been magical. She always takes people away from it all with her voice and Jennifer Hudson gave her the greatest compliment when she said Kymberli Joue took her back to church. So the crowd got to enjoy a spiritual moment of peace before they finally heard some Christmas music. Jennifer Hudson whipped out her own choir as she welcomed the Christmas season and it had been great to hear from her.

The next vocalist had been Chris Kroeze. It took him a while to find out where he fits and he was definitely sticking with his Southern Rock roots. Chris chose the song “Can’t You See” by the Marshall Tucker Band and he chose this song because he said it was something that his fans would like. That was another thing about Chris. He was familiar with playing in front of live audiences and getting their feedback. He knew what worked with them and what didn’t, like a familiar song that he could do justice to and that the audience could follow along. So he was probably the best strategist this season because the song had been the perfect fit for him. It had set off a spark with the audience and did the same with the judges who had been proud to see how far Chris has come.

The next duet called itself MaKymberli. Kymberli Joye and MaKenzie Thomas both came from gospel backgrounds and their sound was similar. They both were capable of great things and they decided to highlight that with their mashup. They chose the songs “Best of My Love” by the Emotions and Cheryle Lynn’s “Got to be Real”. In the end, it had been a great mashup for them and their voices never fail to sound beautiful. They were wonderful powerhouses and so odds are they might both make into the Finals. Another one that was sure to make it was Kennedy Holmes. She was the youngest in the competition and it turns out today was her birthday. She celebrated turning fourteen with her solo “This Is Me”.

“This Is Me” was from the Original Soundtrack for ‘the Greatest Showman’. It was also a pretty emotional song and so Kennedy finally became vulnerable. She had even cried as she practiced this song because it ended up meaning so much for her and so her coach had been happy to see those walls come down. That didn’t always happen with Kennedy because she went with perfection over everything else, but she allowed this song to mean something and in doing that she told a story without even trying to. It had been one of her strongest performances and so it was good that her mom was in the audience to see it for herself.

Reagan had gone next and she left those floodgates wide open. She chose the song “You Are the Reason” by Calum Scott and it was such an emotional song that people couldn’t help crying when they heard it. It was truly beautiful and Reagan did it justice. While the duet she had earlier with Kennedy was fun, these two young women were perhaps stronger on their own. They had completely different sounds and the vibe they each have onstage was unique to them. It didn’t need to be combined with anyone else’s. Meanwhile, the final duet of the night was another great pairing. Sarah Grace and Chris Kroeze were both great at the Blues and so they sang a mashup of the Rolling Stones and Aretha Franklin.

It was such an unusual mashup that it just managed to work for these two. They each have these deep and unique voices that brought all those earthy tones in Blues. It had been a great mashup and an overall great pairing because these two truly know how to work together. If they both make it into the finals, they should definitely sing together again.

The next vocalist had been Chevel Shepherd. She was a cute country girl and Kelly wanted to give her something a little slower. She gave her the song “Blue” by LeAnn Rimes and it was the part of country music that Kelly said she loves but doesn’t hear anymore and so Chevel got to revive some of the older country music for her coach. Kelly believed Chevel was capable of great things and Chevel proved that tonight. She slowed down the song and out onstage she was probably the most adult she’s ever been. Chevel has a great voice and while she showed how much she deserved to be on that stage – she lost none of her cuteness.

But it was Kirk Jay that got to close the show. He was a country balladeer and so he showed off those amazing chops by singing “I Swear” by John Michael Montgomery. This song was one of the first country/pop songs and it fit Kirk’s voice perfectly. His performance had been great and the coaches couldn’t help telling him how much they love him. They said his voice was distinctive and unforgettable. And so no one doubted that Kirk would make it to the Finals – they couldn’t envision anything else happening and neither could anyone else.