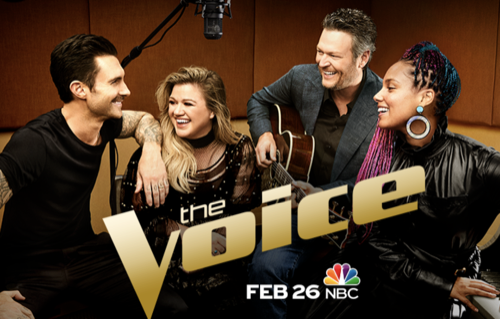 Tonight on NBC’s Emmy Award-winning musical competition The Voice airs with an all-new Tuesday, March 6, 2018, season 14 episode 6 and we have your The Voice recap right below.  On tonight’s The Voice season 14 episode 6, “The Blind Auditions, Part 6” as per the NBC synopsis, “The “blind auditions” conclude as superstar coaches Kelly Clarkson, Alicia Keys, Adam Levine and Blake Shelton all vie to discover and coach the next singing phenomenon from the country’s best vocalists. The vocalists compete for one last chance to be selected by one of the coaches and fight for a chance to win the title of being named “The Voice.”

Genesis Diaz is 19 from Miami, she is a Latina singer who is auditioning to make her parents proud. Blake turns his chair and so does Adam, Alicia and Kelly don’t.

Adam: “Do you want to be a leader or a follower, I think you are tremendous. When you were soft you were soft, you are amaxing” Blake: “I have one spot on my team and I would be so happy if you would complete my team this year.” Genesis chooses Adam.

Sharane Callister was separated from her twin sister when she was 10 due to family issues, she is singing “Naked Rain,” by Ed Sheeran. Alicia & Kelly turn their chairs, Adam and Blake don’t.

Kelly: “It’s disrespectful to not turn around when sings with your talent.Your story is remarkable and that is what makes a great singer.” Alicia: “That was so powerful, it was perfection for me. Whatever your journey has been as given you the ability to perform like that.” Sharane chooses Alicia.

Dallas Caroline was named of the Alan Jackson song called Dallas. She has been singing and playing guitar since twelve years old. Dallas is singing “Always On My Mind,” by Willie Nelson to tell her community that was hit by devastating fires last year. Adam, Kelly & Blake turn their chairs, Alicia doesn’t because her team is full.

Alicia: “You had a beautiful performance.” Kelly: “You have a beautiful quality of voice, I love country music, I sing with Reba.” Blake: “When I see someone young like you singing that song, I go wow, there is our next hero in Country Music, let me be your coach, let’s do this.” Dallas chooses Blake.

Allen Pride Bowser’s outlet when he was little was his keyboard, then he began singing. Allen is singing, “What You Won’t Do For Love.” Nobody turns their chairs.

Adam: “Thank you, that is a song that works for all of us, you are fantastic.” Kelly: “I love your voice, but I was waiting for something higher.”

Jackie Verna is a country pop artist, she had a head injury after an accident and it took two years to recover, she wasn’t sure if she would ever sing again. Jackie is singing, “Peter Pan.” Adam is the only one to turn around and he is thrilled that he gets to have Jackie on his team.

Adam: “You are the best country singer that I have ever heard. I have never been so excited about a one chair turn around.” Kelly: “I am looking for something particular, that is why I didn’t turn my chair.”

Amber Sawyer is 35 years old, she is bringing her strength and her fight to her performance. Amber is singing, “Shape Of You.” Kelly turns her chair, all of the judges teams are now full.

Kelly: “I was so happy that nobody else could turn their chair. That was really hot, that was me on a really good day.”