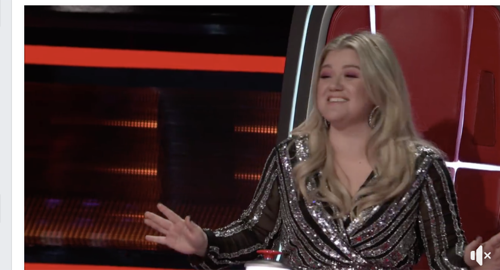 Tonight on NBC’s Emmy Award-winning musical competition The Voice airs with an all-new Monday, March 19, 2018, season 14 episode 7 and we have your The Voice recap right below.  On tonight’s The Voice season 14 episode 7, “The Battles Premiere” as per the NBC synopsis, “The “battle rounds” begin and the coaches enlist the help of top recording artists to offer their knowledge and skills as advisers. Kelly Clarkson teams up with Hailee Steinfeld, Alicia Keys with Shawn Mendes, Adam Levine with Julia Michaels and Blake Shelton with Trace Adkins. In this phase, the coaches pit two of their own team members against each other in a dueling duet. New this season, coaches go further in the training process than ever before by working with the artists right up until performance night, leading to some of the best battles in the history of the show.”

Tonight is the first night of the Battles and Kelly is excited that she has the opportunity to steal artists. Tonight, Jamai is paired with Sharane Calister, both from Alicia. Singer, songwriter Shawn Mendez is the advisor and the two artists are singing, “Mercy” by Shawn Mendez.

Jamai and Sharane spend time as well with Alicia, a vocal coach and a producer. Adam: “There were some moments with you Jamai were I was like wow, some of those runs towards the end. Sharane, you just have the fullness and thckness in your voice that is very special qaulity and fills the room. I would say it is a dead heat, I would choose you both.”

Blake: “I spent two months when i was five months old on a trampoline to do what you just did – you went from on your knees to standing on your feet. Sharane, you don’t even need a microphone, both of you are incredible vocalist.”

Kelly: “You are both different and so cute. All of a sudden you flipped a switch and you were so intense. Jamai you have some really sick runs, Sharane I gravitate towards you because of the ache in your voice.”

Alicia: “Jamai you have been the shocker for me, Sharane I think you have lived eleven lives and I haven’t even gotten to your performance.” Alicia announces that the winner of this battler is Sharane.

Team Kelly is next, it is Brynn Cartelli paired with Dylan Hartigan. The advisor for the the two artists is Hailee Steinfeld and both artists are singing, “I’m Ready For It,” by Taylor Swift.

Alcia: “Brynn, Dylan that was crazy. I loved that energy. First of all Brynn that voice inside of you was something crazy. Dylan you have all this swag and energy.”

Adam: “This has to be a typo, it says you are fourteen here Brynn. Dylan, your energy is so infectious. I have to go with Brynn though because she was so crazy.”

Blake: “Dylan you are from NJ, you are like one of them dude’s from Grease – you are only 21 and you are great. If I were to hear you on the radio Brynn that would be so cool because you have so much power – you have so much energy in your voice, at 14 you are a real star.”

Kelly: “I think what people forget about you because you are so magical on the stage and so confident, that you have a really sold voice Dylan. Brynn, you have this old school voice with a lot of soul.” Kelly announces that the winner of this battler is Brynn. Blake hits his button and steals Dylan.

Team Blake is next, Kayla Jade is paired against JessLee. The advise for the two women is country superstar Trace Adkins, they are singing, “One Last Time,” by Ariana Grande.

Kelly: “I loved that it was so good. Kayla, the thing I loved most about your voice, it looks effortless, I never want to sing with you. JessLee you were amazing, you were phenomenal. You both did a really good job, although I am a fan of Kayla.”

Adam: “I was actually thinking the same thing, in fact when you were singing you made me bow bashful because you were looking at me.”

Alicia: “That was a beautiful testament to you JessLee actually reminding us that you are country rock, I think thats a cool way to show that you have major versatility and you don’t back down, it’s incredible. Kayla it was a joy to watch you on stage and the thing that you have to work the most on is not closing down your greatness.”

Blake: “JessLee the grip that you had on the song is the thing that Kayla needed to figure out for herself, you had it naturally, but you both were incredible.” Blake announces that the winner of this battle is Kayla.

Team Alicia’s artists are up net and it is Shana Halligan against Christiana Danielle. The advisor for these artists is Shawn Mendez and they are singing, “Use Somebody,” by Kings of Leon.

Adam: “I never hard that song done that way. Christiana there really is something that draws me into what you do, it’s very special the way you deliver a vocal and I appreciate that. Shana you are also a very unique singer and the moments that were powerful were very very powerful, there really was greatness in both of you, I didn’t fully feel it congeal and come together, but I would pick Christiana.”

Kelly: “I have so many things to say, it is interesting that you both were on the same team. There is something mythological thing about you and you have this calm Nefertiti thing about you. You don’t even get these kind of performances at award shows.”

Blake: “As far as that performance goes you are both equal but very different in your approach at the same time, I agree that there is something endearing about you Christiana, but Shana cast a spell on me.”

Alicia: “I love this version of this song and I love the fact that you bot deconstructed it and took it to another place but made it powerful and meaningful, in a way that is almost unrecognizable. Congratulations on a beautiful performance.” Alicia announces that the winner of this battle is Christiana.

Kelly’s final pairing of the night is Jackie Foster against D.R. King and Hailee Steinfeld, they are singing, “Sign of the Times,” by Harry Styles.

Alicia: “That was honestly my favorite battle today. D.R. you are a total stunner, so beautiful to hear the capacity of your voice and Jackie, you have this roundness and powerful and warm voice.”

Adam: “That was just a special, special thing and I am really happy I got to experience it because you both are that good. You are both astonishing, I am just going to say this, I couldn’t take my eyes off you Jackie – you were the real revelation for me today.”

Blake: “There is so much pressure in these battles, the confidence that you guys have goes a long way in that as a coach who has worked with ten thousand people on this show – I can’t tell you how far that will take you. Jackie is the discovery here and my vote would go to her.”

Kelly: “I love both of you, D.R. when you hit those notes it was effortless and then Jackie hit that big note.” Kelly announces that the winner is D.R. Alicia, Blake and Adam all hit their buttons to steal Jackie. Jackie picks Adam as her new coach.