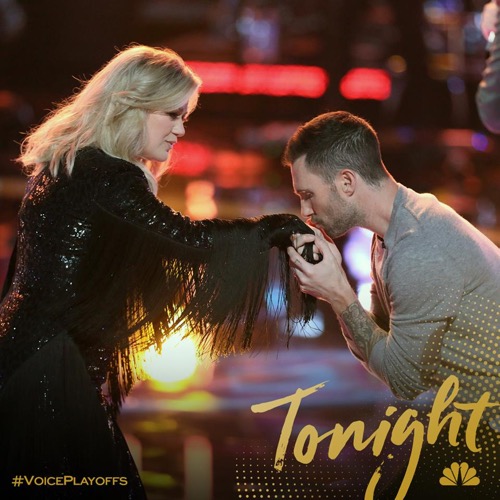 Tonight on NBC’s Emmy Award-winning musical competition The Voice airs with an all-new Tuesday, April 18, 2018, season 14 episode 18 and we have your The Voice recap right below.  On tonight’s The Voice season 14 episode 18, called, “The Live Playoffs, Night 3,” as per the NBC synopsis, “The remaining artists from two teams will perform to try and secure a Top 12 spot. The artists with the most votes from each team will be revealed. Each coach will pick one artist from their remaining four to take the final live show spot on their team.”

Tonight’s round of the play-offs will be deciding who will make it into the Top 12 and who would be sent home!

But it hadn’t matter which team the contestants were on. They weren’t going to be judged by their coaches and were actually going to be judged by the people at home. The viewers got to decide with real time voting who got to stay and so they helped ease some of the pressure that was on the coaches. Some of the coaches tend to take things personally when they’ve seen someone they’ve coached and believed in suddenly get sent home however they usually went to bat for them with the viewers and everyone could see that for themselves when the first team that went up was Team Kelly.

Kelly loved her vocalists. She’s gotten to know them and like them, so it had been difficult for her not to advocate for them like she did with Kaleb. Kaleb was her country star and he pulled of a truly impressive performance tonight. Therefore, Kelly was on her feet and dancing to the music until the very end. She had loved Kaleb because he had always been a favorite of hers and so she begged America to vote for him. She said Kaleb was the best country star there despite seating right next to Blake and she meant it. Kelly would sing the praises of all her vocalists though she wouldn’t get up for everyone.

The next person from Team Kelly was Alexa. Alex put her own spin on a song more people would recognize because she hadn’t chosen something as obscure as Kaleb. Kaleb went full country and Alex chose to sing “Stop & Stare”. She was quite good and, out of all of them, she got Kelly to cry. Her coach had been so proud of her that she needed a minute to compose herself before she outright begged America to vote for Alexa. She said Alexa had this quality in which she didn’t reach out to the audience because her voice alone would naturally draw them to her. So before Alexa left the stage, Kelly just had to tell her how proud she was of the young woman.

Then the next person that went up was DR King. King was a personality on stage and so it didn’t matter that people didn’t easily recognize the song because they did like Kelly would later admit she did – they made up words as they did their best to sing along. His performance had been energetic and it had been fun because he had been that good. King had wowed with his performance and Kelly couldn’t help herself from pleading to the audience at home that they keep him around. She knew that King would be worth their votes and had no problem telling everyone that, but Kelly wouldn’t be that enthusiastic about everyone’ performance.

The coach had had a hard time with Dylan. Dylan had an amazing voice and that got lost as he tried to pander to the audience. He was running around to touch everyone’s hands and he wasn’t showing off his range. Dylan had seen the performance as if he was already in concert and so Kelly had been left disappointed. She knew that Dylan had more he could have offered and hadn’t thought tonight’s performance was his best. Kelly had still believed he was worth talking up and she had done just that, only he proved to the be the weakest on her team and that was clearer than ever after the last member of her team went up.

The last from Team Kelly was Tish. Tish decided to go old school with Etta James’s “At Last” and it had been beautiful. It wasn’t a song to get up and dance or even a song that would need her to go out near the audience. The only thing she had to do was stand still and left her voice be powerful on it own. Tish was even done up classically with a gold dress and her hair swept to the side, she wasn’t there to be merely herself because she wanted to show everyone she could better than that. And people loved her performance which went especially for her coach because Kelly had always loved her voice as well as it range.

Team Kelly had done more than well for itself and Kelly had been proud of them. The next team up, however, was Team Adam and the first of his team was Reid. Reid went old rocker which wasn’t something the competition had seen a lot of and so Reid had definitely left an impression. He was up and had the audience up with him, Adam had enjoyed the performance so much that he hadn’t had any criticism and he wasn’t like the other judges because he would have said something more outright if he didn’t like it. This time he liked it and going forwards he would talk about how everyone on his team was so different.

The next person that went up was Jackie and she was the dark horse. Not many people had believed in her when she first tried out and Adam had decided to take a chance on her. He would later tell her that he saw a quality in her that told him she would be great and that she hadn’t let him down since. She had powerful voice and was as great onstage as Mia. Mia had also been doubted because Adam had been the one person to turn around for her and each week Mia simply got better and better. She was great tonight as well and she had done so by choosing an ambitious song that many others wouldn’t have.

Then following Adam’s dark horses, Drew had song wonderful rendition of “Wild Horses”. It had even sung it like Adam had with Alicia and so that brought back a lot of memories for his coach. Adam said he had a feeling of nostalgia hearing him and that America would regret it if they didn’t advance him further. So Adam had been proud of everyone and the one that had truly won the night for him had been his last act – Rayshun. Rayshun chose “ I’m Going Down” and then gave this incredibly amazing performance that had all the judges were on their feet for Rayshun because he had just been that great!

But despite the highs and lows of tonight, the judges had had someone from their team be picked by America while they made the final pick for the second person that would be representing them. That had been hard on everyone yet they all had to do it.

From Team Blake, America saved Pryor and he chose to save Spensha!

From Team Kelly, America saved Kaleb and she chose to save DR!

From Team Alicia, America saved Jackie and she chose to save Christiana!

From Team Adam, America saved Rayshun because they couldn’t have chosen anyone better and Adam chose to save his own Jackie!