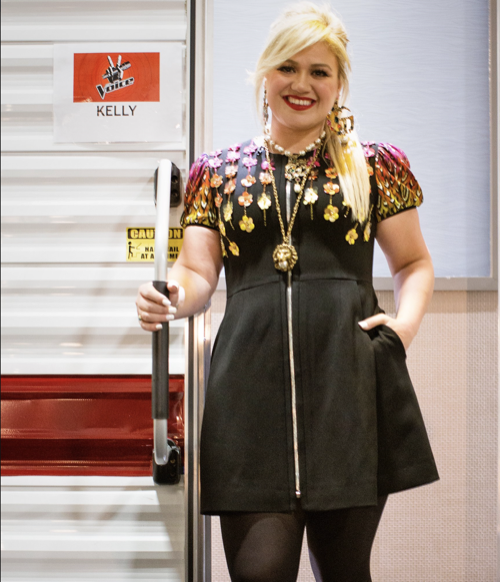 Up first tonight is Team Adam’s Rayshun LaMarr and he is singing “When Love Takes Over.” Adam thinks if ever there was a song that embodied Rayshun’s spirit, this is it because it is big and upbeat. Adam knows Rayshun is sharp and wants to try singing a little flat when he goes sharp. Rayshun can personally relate to this song because he is so in love with his partner and this song is dedicated to him. Alicia: “There is something about you that is so electric and everyone can feel it. Your passion takes over you.” Adam: “Rayshun just continues to ramp it up every time he performs. I really believe you just became the front-runner because you are the best singer in this group so far.”

Up next is Team Kelly’s Kaleb Lee and he is singing, “I’m Amazed By You.” Kelly wants him to take his notes higher, she loves playing with the raspy side of his voice. Kaleb knows when he walks on stage he is just going to think about his wife. Blake: “I am regretful, you have come a long way, that performance was amazing – could you bring back the Kaleb from the wedding pictures, your hair was rocking.” Kelly: “I have been such a fan of Kaleb since the Blinds, I love that he picked this song, I had this one on my list. I love your voice, you blossomed and this is authentically you.”

From Team Alicia it is Jackie Foster and she is singing, “Toxic.” Jackie has a connection to the lyrics, she is powerful and has this edgy rawness. Alicia loves that when Jackie hits the stage this power takes over her, she is like Pat Benatar and she is going to own this. Kelly: “I feel like that was Sandy Dee’s moment at the end of Grease, it was so sexy and cool, a little punk and rock ‘n roll, I loved the boots, it was so good.” Alicia: “I was so excited about this song because this is your song and your bands, you are musical and talented, it was killer, you nailed it.”

Team Blake’s Spensha Baker is up next and she is singing, “Don’t Take Your Love From Me.” Spensha says there was a lot of gospel and country music in her house as a child. This song really tells how she thinks about music. Blake tells her it is really important to be right on the beat with this song. Adam: “Spensha, it is really rare that a singer has it all, I think what is so beautiful is that you just had it all. I think that is a rare thing and I am a huge fan.” Blake: “I swear you are still one of my favorites that I have had a chance to work with. You still have the nerves but you push them to the end of the song and we are able to hear your delivery. You are doing exactly what you are supposed to do, country music.”

Team Alicia’s Christiana Danielle and she is singing, “Say Something.” Christiana has always been afraid to sing, but there is no more, she is able now to let it go and give it her best. Alicia thinks this song is really going to set her apart and make people fall in love with her. Kelly: “I am such a fan and I am so tired of telling you how good you are. I’m not tired, I will keep doing it. Your lows are so amazing and beautiful, I am blessed to sit here and listen to you.” Alicia: “I am so taken to sit here and listen to you, there is not another person in the world that sounds like you. I am so excited that America keeps on voting for you.”

Team Kelly’s D.R. King is up and he thrilled that Kelly saved him. D.R. is singing, “White Flag,” Kelly is sure that this song will be perfect because his voice is very soulful. D.R. says this song has so much meaning to him because of his background, music saved him. Kelly thinks D.R. has the best range on the show and he nails this, he will be unstoppable. Blake: “I have been saying this about you all along, there are so many sounds to your voice, so many layers and you always display them. Incredible job man.” Kelly: “I am such a fan of you, you are an amazing vocalist and I want America to vote for you so I can hear your record.”

Team’s Adam’s Sharane Callister is next and she is singing, “In My Blood.” Sharane thought she was going home and still can’t believe that Adam saved her. She tells Adam her story about being separated from her twin sister. This is song is powerful and Sharane feels it is a perfect song for here at this point in her life. Alicia: “There is something so special about you, you have a power and a sadness, a beautiful resilience and I am really rooting for you on this show and in life.” Adam: “It is so hard to figure out what leads to success, you can all the skill and talent in the world and not have what you have, to make people believe that you are telling the truth. You have it all, it is perfect.”

Team Blake’s Pryor Baird is up next and he is singing, “Pickin’ Wildflowers.” Pryor grew up in the country, hunting and fishing, he had a great time. Blake thinks Pryor fits in perfectly with this bluesy country music. Kelly: “I love it, everytime you sing I just want to go with my man and have a good time, I love it. You remind me of being in a Texas bar, I’m a big fan.” Blake: “You are to a song as a bulldozer is to trees, you jumble all the songs and I love that it is always a different version of the song.”

Team Kelly’s Brynn Cartelli is up next and she is singing, “Up To The Mountain.” Brynn relates to the song because of all the people who support her. Kelly tells her to concentrate on the story. Brynn says the song is a challenge but her mother wanted her to sing it. Alicia: “I am proud that you are falling your daydream, you are not quitting, you have this capacity from another time and I am so interested in knowing more about who you are.” Kelly: “I constantly just shocked, you have the craziest taste in music and you nail all of it, it’s crazy and real.”

Team Adam’s Jackie Verna is next and she is singing, “I’m With You.” Adam really thinks this song would be perfect for Jackie even though it is not country. Jackie is into it, the song is about being alone and lost, and she has felt that way before so she can relate. Adam wants her to really hit the notes that Avril Lavigne can when she sings it. Adam thinks she is definitely a front-runner. Blake: “That song was so cool, your voice is so different, you have that country angel, I love how direct you are. You are a great singer.” Adam: “I was forced to make this crazy decision last week, I choose you because the explosive in your voice is great. You rose to the challenge and you are amazing.”

Team Alicia’s Britton Buchanan is singing, “Small Town.” Alicia thinks he really has a shot at this thing and loves his sense of humor. This is the first time that this song has ever been sung on The Voice. Last summer Britton and his friend went to see John Mellencamp and Britton just knew then that he had to sing it. Kelly: “You are an amazing vocalist, I love it, you have an old soul. I think you are a next generation, John Mellencamp.” Alicia: “Thank you, Blake, for giving me Britton, you don’t need this stage, you don’t need anybody else because your destiny is to be here. We just want to see you play.”

Team Blake’s Kyla Jade is singing, “One Night Only.” Blake thinks she is so connected to this song. Kyla is so happy but nervous to be singing a Jennifer Hudson song because she was her background singer. He talent is undeniable and Blake thinks she is going to do great. Jennifer calls Kyla and tells her she will be cheering her on. Blake: “Jennifer was just texting me and on behalf of her and myself, welcome to the front of the stage. No more insecurities, this is your moment, America loves you, this is your time.”