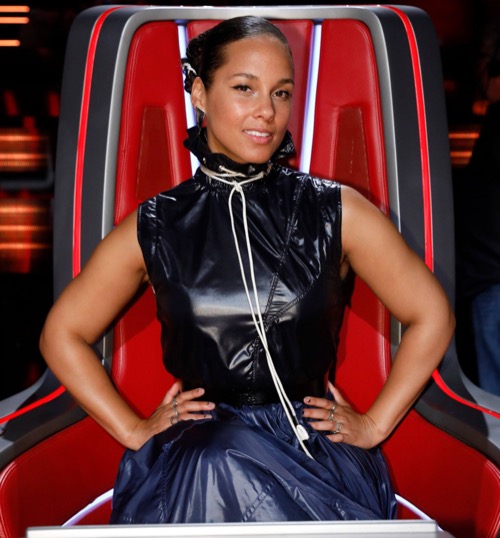 Viewers at home were the ones with all the power. They more or less chose everyone in the Top Twelve and they again got to chose who would be safe in this latest round of “The Voice” when Carson announced there was some late night voting. The votes it seems we’re in and three were automatically safe thanks to their many fans! The people that were safe tonight were Britton Buchanan from Team Alicia, Sharane Calister from Team Adam, and the last opening went to birthday girl Kelly Clarkson’s Team. It was her Brynn Cartelli that began tonight as safe and Brynn happened to be the youngest contestant this season.

Brynn might also possibly be one of the youngest in the entire history of the show and so it was good for her that her dreams came true at such an age. Some of the contestants hadn’t always been that lucky! They were some that had actually given up on their music because they never thought they were going to be onstage or gain the chance to truly explore their dream, but someone said this season that it was “never too late” and that was turning out to be true. Team Kelly had all been fortunate when Kelly chose them because tonight they got to perform with their coach as well as an incredibly wonderful performer.

Kelly had gone up on that stage and had just been so proud of her team that it actually came out in the performance. They all got moments to shine and it was clear they all had fun just by performing. And so their performance was something nice to hold onto before Carson announced the results of the next round of voting. Carson began by pointing out that were only two people that were safe from the latest round and therefore everyone learned that members of Team Blake and Team Alicia were safe. The ones that were safe were Pryor Baird from Team Blake and Christiana Daniella from Team Alicia. So out of the first five that got into the Top Eleven, two of them were Team Alicia.

Alicia, of course, was happy to learn that at least two of her three-person team was safe and so she had been confident going into the next round. The next round, however, had been after Adam performed with his band Maroon Five. The band had gotten the chance to introduce America to a new song of theirs and by the sounds of it, their fans enjoyed it. But eventually, it was back to another round of who was safe and could be eliminated. Carson announced that another two were safe and that they came from both Team Blake and Team Kelly. The person safe from Team Blake was Spensha Baker and the person safe from Team Kelly was her personal favorite Kaleb Lee.

Thus bringing the tally to two from each team except Adam’s. Adam only had Sharane safe at that point and so he knew he needed America to save at least one more from his team just to be even with some of the other coaches and there was just problem with getting his numbers up – Adam wasn’t performing with his team. He performed with his band while Kelly performed with her team and there had been another coach that showed off their team in the best light. Blake had also performed with his team and they gave a lively performance that had everyone on their feet, so it wasn’t surprising when Blake received great news in the next round.

Blake was later told that his entire team was going unscathed because America voted to save Kyla Jade from his team. That’s meant he didn’t have to have say goodbye to anyone and he wasn’t the only one that got such great news. Team Alicia was also going unscathed thanks to everyone from her team getting enough votes to stay for another week, so the last vote in that round was an important one. Carson announced that three people were safe and mentioned both Blake and Alicia before announcing that a member of Team Adam was safe as well. Adam’s numbers did climb back up thanks to the people he had on his team and so the last person that was safe was Jackie Verna.

With her safe, the bottom two were shown to be D.R. King and Rayshun LaMarr. Both were great performers and so their coaches had been a little shocked when they both landed in the bottom through the two were given one last chance to save themselves. They each had one last performance to prove that they deserved to stay on and so first up was D.R. He had great range and had a very upbeat performance that had Kelly arguing with America. She said she never saw D.R. in the bottom and couldn’t see why they hadn’t voted for him from the start. Kelly was very proud of him and she pleaded with viewers to vote for him right then before it was too late.

Kelly also mentioned that it was her birthday and that they all should vote for D.R. as her present to her. Except Rayshun didn’t deserve to go home either. He always went out there and gave great performances because he was more than just a vocalist, he was also a great entertainer. Rayshun would have people on their feet and even had other coaches like Kelly on their feet clapping for him. He gave another two hundred percent tonight and Adam had asked everyone to use their last five minutes of voting wisely because he knew that they would regret not voting for Rayshun while they had the chance.

So when the votes did come in, America chose to listen to Adam and saved Rayshun LaMarr!