BY Kristine Francis on May 21, 2018 | Comments: one comment
Related : Reality TV, Recap, Television, The Voice, TV 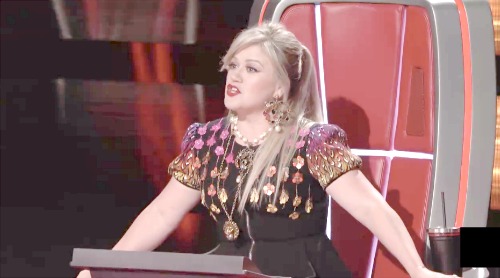 Tonight on NBC’s Emmy Award-winning musical competition The Voice airs with an all-new Monday, May 21, 2018, season 14 episode 27 and we have your The Voice recap right below.  On tonight’s The Voice season 14 episode 27, called, “Live Finale, Part 1,” as per the NBC synopsis, “In the final phase of the competition, the final four artists perform live in front of coaches Kelly Clarkson, Alicia Keys, Adam Levine and Blake Shelton. Each finalist performs three times – one new solo cover, a special duet with their coach, and they debut their first original single. One of the four artists will be a step closer to being named “The Voice.”

It all comes down to what happened tonight. There were four finalists remaining in the competition and each was going to be performing a good four times throughout the night. They were also going to be crisscrossing between covers and an original song created just for them, however, following their performances they would actually have to explain the significance of their original song. This song would, after all, launch their careers in the music industry as genuine artists and so everything from song selection to their original song had to have some meaning. The song would easily register with the audience at home if they could understand the story if not the emotion that went into it.

The story-telling part also helped to keep the audience invested in the artists. Everyone has been following most of their stories. They know who’s grown up in the church and who was either married or dating someone, so these fans needed to believe that they did know these artists. They needed to be invested and to keep them invested these rising stars had to do more than sing an amazing original song. They also needed to show their journey on the show. Kyla Jade sat down with Carson Daily and her coach to talk about their first audition. The first time she performed for everyone she had been nervous and hadn’t known if anyone would turn around for her only she got lucky.

Out of the two judges that turned around for Kyla, she had surprised everyone by choosing to go with Blake. Blake was country music and until they found out that she used to sing backup for Wynonna Judd no one knew she had roots in country music as well. So Kyla has always been surprising! She eventually convinced the other two judges that they should have also turned around for her and so that helped her gain some much-needed confidence. Kyla became more comfortable on the stage and her coach noticed it. He said she was always a great singer and what was her making her better onstage was this new confidence to her. And so Kyla first performance of the night hadn’t been the original song.

It had actually been a Beatles cover! Kyla performed “With a Little Help from My Friends” and it gave a little bit of that new sass onstage. She had been great and Blake reminded everyone that she was a true contender. Now the next person to hit the stage had decided to start things off with their original song. Britton had written and performed “Where You Come From”. He had given another amazing performance and hadn’t been afraid to talk about the song. Britton had apparently started writing it during class and finished it during band where he was able to add the lyrics so right there that tells everyone that couldn’t help but write this song. He should have been focusing on school and was instead caught up in writing his music because that’s what he always wanted to do with his life.

Britton said he wrote that song because he never wanted to forget where he came from and now no one will because of his original song. The next performance of the night, however, had been a duet. Brynn had sung a duet with her coach, Kelly. Kelly was really counting on Brynn because Brynn was the last person she had in this competition and so, of course, Kelly was going to pick a great song to show off Brynn. Brynn and Kelly performed “Don’t Dream It’s Over” by Crowded House and Kelly wasn’t afraid to step back so that Brynn would shine. She was a good singer with a strong voice and most importantly she had a great fanbase. Her fans from her hometown were always the most vocal and so both Brynn and Kelly needed that same fanbase to come back out with full force.

The next person to perform after Brynn had been Spensha. Spensha had some background in gospel music and what she looks back on was how Blake convinced her to go country. He saw something in her that she hadn’t been sure she saw in herself and so she put her faith in him. Allowed him to guide her into making the best choices and she’s only grown stronger because of it. She was a great country music singer and she liked the old school with some added touch of the modern. Spensha was a story-teller and so she chose to perform tonight “Merry Go Round” by Kacey Musgraves. It told a really great story about pain, loss, and even showed off Spensha’s range. She was truly a great performer!

Spensha could only be followed by people dedicating their next performance. Britton again performed a duet though this time with his coach and together they made their performance about the people that originally sang it many years ago. They performed “Wake Me Up” by the late Avicii. Avicii died before his time and so this song was dedicated to him. He had been a great performer and the duet had gotten emotional. Alicia had asked the audience to put their hands together for the late start and they hadn’t hesitated in remembering him. So the whole performance had been bittersweet. It was an upbeat song with a lot of memories and the audience clapped for everyone involved in this one performance.

The next person to perform had been Kyla. Kyla wrote an original song based on her roots in soul music. She loves soul music because she believed it could resonate with any and everyone, so it was no surprise that she wrote a song that she’d hope would do the same. She wrote “Leave the Light On” and it was clear that it meant something to her by the way she started tearing up during the song. Kyla had been a favorite of the judges and they hadn’t stopped giving her standing ovations for weeks yet one of the reasons she was such a breakout star because of how her music so often brings tears to everyone. They were a few that were water-eyed tonight and so its safe to say that her original song was a hit.

The next act to hit the stage was another duet. Spensha had picked Blake as her coach because she knew that one day she would get the chance to sing with him and so she already had the song picked out. She picked “Tell Me About It” by Tanya Tucker. It was a nice and upbeat song that they both enjoyed performing it which meant everyone got to enjoy as well. Now with another duet down, it had been Brynn’s turn to introduce her original song. The song was written specifically for Brynn and it was fun, fast-paced, and about wanting to pursue that first crush. The song was called “Walk My Way” and it had been perfect for Brynn. Brynn got to enjoy getting into the song and not only will her teenage base love, but Kelly firmly believed any age group can also get into it.

Brynn received full praise from all the judges and Adam for one had been left in amazement because he said she had been so calm and poised that it looked like she had been on that stage her whole life. In other words, she didn’t seem like a fifteen-year-old. Brynn has been called an old soul before and she was called that again tonight. The next person to perform was again Kyla. Kyla finally got her duet with Blake and they decided to do “Only Love” by Wynonna Judd. This was the last time they were going to be performing together and so Blake had wanted to make it special. He chose a song he always loved and one he knew held a connection for Kyla. And so they could have done thing song upbeat or a little more soul than country, instead, they just slowed it down.

They made the song sound like a ballad and it had been a sweet way to end their collaboration. Next up had been Britton. Britton decided to end things on a high note and so he chose to perform “Good Lovin” by The Rascals. It finally got Britton to let loose on stage and he just ran with it. He was up and dancing, he also went down into the audience and so Britton had had the time of his life with this performance. He couldn’t help having fun and frankly, the judges had been so amazed at seeing this other side to him that they wondered where he had to hide it this whole time. Everyone had enjoyed the performance from Britton and it had been a good way for him to end things tonight. And so the next person that went up had been Spensha.

Spensha was given an original song called “Old Soul”. It was a little gospel and a little country, so it made perfect sense for her. Spensha loved the song and she performed it like she loved it. So Blake said country music needed her. He believed she could go out and be ready to perform at the Grand Ole Opry. Blake also believed she deserved to win this competition and so before they moved on – he asked everyone to vote for Spensha. And with that being Blake’s last word on the matter for today, it came time for the final act. Brynn had been chosen to close out the night and she decided to perform “Skyfall” by Adele. It was quite a powerful song by even stronger artist and so Brynn took a risk but luckily she pulled it off.

Brynn knew how to reach those high notes and she ended the night with a coach that was incredibly proud of her.