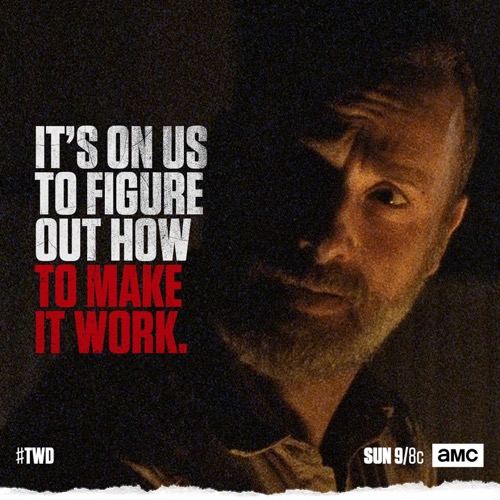 Tonight on AMC our favorite show The Walking Dead airs on an all-new Sunday, October 14, 2018, premiere episode and we have your The Walking Dead recap below.  On tonight’s The Walking Dead Season 9 episode 2 called, “The Bridge,” as per the AMC synopsis, “The communities join forces to restore a bridge that will facilitate communication and trade. Someone is gravely injured at the construction site.”

We see “King” Ezekiel, and he tells Henry that he will be able to tell his grandchildren one day about the bridge they build. Carol walks up, Henry gives her a kiss and walks away. Ezekiel hugs Carol, she tells him the sanctuary is not ready yet, so she is heading back there. Ezekiel kisses her.

Eugene is with Rick talking about the supports on the bridge.

Michonne goes to see Maggie and Jesus, tells them that the Sanctuary sent out the ethanol a week ago and she doesn’t know how it could not have arrived. Michonne thinks the guys who made the delivery could have been taken down by walkers, but they need the food. Maggie says that without the fuel the tractor doesn’t move. Michonne asks how long Earl is going to be locked up, Maggie says she doesn’t know. Michonne says that she hates what he did to Maggie and Enid but they need crops planted. Maggie offers for Michonne to stay the night because it is a long way back to Alexandria.

Daryl and Aaron are working on the bridge when Henry is giving out water and when a guy wants more, Henry says no and hits the guy pushes him. Henry defends himself but Daryl doesn’t like what he says and intervenes.

Eugene and Rick arrive at the bridge to find Daryl fighting with the guy, he stops it and tells them all to get back to work. Later, Rick talks to Daryl who tells him that he is worried about the old saviors. Rick wants everyone to be on the same side.

Tammy wants to see her husband, Jesus says he can’t let her see Earl because he tried to kill Maggie and she needs to give her a little bit before she figures it out. Tammy says she has no place else to be so she is going to sit there and wait. Michonne overhears and asks Jesus if he agrees. He basically says it is not his place and he will do whatever Maggie wants him to.

Gabriel is with Jadis, they talk about how people didn’t trust them before and they are both thankful that Rick reached out to them and believes in them.

Jesus is with Magge and her baby, she asks him what he is thinking. He says that Tammy has been asking to see Earl. Maggie ends up taking Tammy down into the prison cell under the house. He tells Tammy that they are treating him fair. Tammy tells him that she forgives him.

Maggie is alone with Earl and tells him she wants to know how he got there. He says that he was always drunk, he can’t even remember the day his son was born. He joined AA, when his son was two they were barely making ends meet. He was on his way to pick up his son when he saw a sign for a bar, the babysitter could smell the whiskey on him and didn’t want to let him take his son but he took him anyway. The next thing he knew he was on the side of the road and Tammy picked them up. Tammy told him he was sick and they swore to stay together no matter what, he never took another drink and was never tempted.

Earl asks her why she hung Gregory and not him. She asks him if she made a mistake, he says no and she walks away.

Tara is on the lookout and calls Rick, tells him that walkers are coming on schedule. There was a second alarm that was supposed to go off and it didn’t, Tara tells Rick that there is something wrong and if it doesn’t go off, the walkers are going to head right into their crew. All of a sudden, Daryl is on the work site and walkers are coming from everyone, he yells at everyone to get back and a huge log accidentally drops on Aaron, Daryl won’t leave him, he gets him loose just as Rick and others come to help kill the walkers. Aaron’s arm is hurt pretty bad, Daryl gets him to the infirmary and unfortunately, the arm is going to have to be amputated. Daryl leaves and goes after the same guy who hit Henry, Carol breaks it up.

Michonne is with Maggie, she tells her has done something amazing with the place. Maggie tells that she has ordered Jesus to load up all the food as they agreed. She is also going to let Earl repay his debt by planting for them.

The guy who fought with Daryl goes to complain to Rick who replies with telling him to leave the place.

Aaron’s arm was amputated, and he is in a lot of pain. Rick goes to see him and says that he is sorry that he had to pay the price. Aaron says it is ok and he will always be glad to have been around to see Rick create a new beginning for them.

Gabriel is outside with Jadis and she asks him a personal question, who is the women he had her draw earlier in the day. He says she was his organist at his church and he cared for her very much, he was afraid, and he lost her. Gabriel grabs Jadis and kisses her, he tells her he is supposed to be on watch.

Carol and Ezekiel share a tender moment and Rick looks on.

It is the end of day 35, a man lost his arm, the project is behind schedule, people were at each other’s throats. The thing is though, as bad as it was when the day was done, they came together. Not all of them, but enough. The choose to be together. No matter what happens, it is human nature to come together, that is just what we do. Rick is talking to Neegan, who tells him that when it finally comes to shit, he be sure to come back and tell him about that day too. Neggan says, building it for who, Carl. Neegan says Rick is not saving the world, he is just getting it ready for him.

All of a sudden, Jadis is on watch and she sees something – then the guy Daryl fought with leaves the camp and is attacked by someone he recognizes.