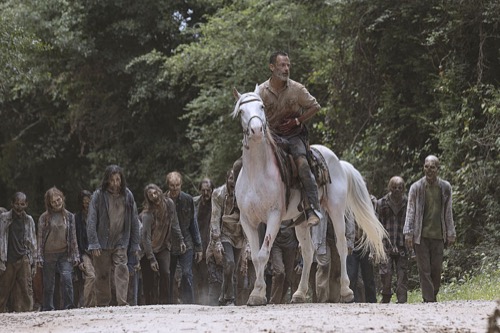 We see Rick in the hospital and he is telling a younger version of himself to get up. Rick looks down and there is blood all over his hand, he has a deep wound. His younger self-tells him to wake up.

We now see Rick pinned to the rock with the metal rod sticking through his side. Rick pulls himself up off the rod and manages to crawl away from the thousands of walkers that are coming towards him and climb up onto the white horse that is waiting for him. Rick gallops away as the walkers follow him.

Rick is fading quickly but manages to gather strength to get the horse going so he doesn’t get attacked by walkers. Rick is thinking back to the early days, he is with Shane in a car, eating lunch and talking together. They call each other assholes and laugh together. Shane tells him it is time to go back to how he was before when he fought for everyone. He goes on to tell him to dig deep and find the rage and anger. Rick says he is sorry for what he did to him. All of a sudden, Shane is not Shane, he is a walker and in Rick’s face. Rick is now in a building and manages to get free but there are lots of walkers on his tail. Rick safely makes it back on the horse.

Meanwhile, Maggy is on the road and meets up with a walker, she gets off her horse and bashes it in the head a few too many times.

Michonne is with her daughter when Maggie arrives and she has a very determined look on her face. Maggie makes her way to where Negan is kept and Michonne is there, she tells her to move. Michonne tells her that Glen wouldn’t want this, Maggie says she doesn’t know because Glen is not there. Maggie says the one thing she wants is to see Glen’s murderer dead. Michonne tells her that she is going to have to find another way because she is not letting her go to Negan. Maggie has her hand out, Michonne passes her the key. Maggie goes inside and she sees Negan in the cell. Negan tells her that she has the fire, he remembers her.

Negan says that he remembers hearing her screaming when he busts open her husbands head. Negan asked why it took so long for her to get her nerve. Again, Negan goes on detailing all the graphic grotesque way he killed her husband. Maggie puts the key in the lock. Negan tells her to have her justice, kill him, it was worth it. Negan continues to taunt her, she tells him to move into the light. She opens the door and throws him out of the cell. He starts crying and begs her to kill him so he can be with his wife and Lucille. He continues crying and begging her to kill him. Maggie tells him to get back into his cell, she came to kill Negan, and is already worse than dead. Maggie locks the cell and leaves Negan who is on his knees crying saying it wasn’t supposed to be like this.

Rick is fading out again, this time he is thinking of Hershel, he tells him that he is so sorry about him and Glen. Hershel tells him that he will only make Maggie and his grandson stronger. Rick says he has to find his family, Hershel says he doesn’t. He goes on to say that he is tired and maybe he can find his family there. Hershel tells him to wake up. Rick is still on the horse, but barely and there are tons of walkers behind him. We now see Rick in a building, there is a door and it says open dead outside. Rick opens the door and there are thousands and thousands of dead people lying everywhere.

Rick sees Sasha, she tells him that they change each other and make each better, and it never ends. Rick says that it feels like it is ending. Sasha says they never die and it is about all of them. She tells him that he is not going to find his family because they are not lost. Sasha tells him to wake up.

Rick fell off the horse, he is at camp now and sees everyone dad and some turned into walkers. Rick is crawling on the ground when he falls over on his back, he hears gunshots. One walker is on top of him, but he throws it off. Rick scrambles to his feet and is walking while holding his wound. There are still thousands of walkers behind him. Rick falls down, just before the bridge. All of a sudden, Michonne arrives with the group. She gets down on her knees and tells that she fell in love with him because he is a fighter and now is the time to fight. Rick tells her that she is his family, he found her.

Rick says it is not real, Michonne tells him to wake up. Rick is alone, he stands and starts walking towards the bridge. Rick is crossing, with the walkers behind him. He falls down again, but gets up – looks at the walkers and says no. Rick just about gets eaten by a walker when Daryl kills it. Michonne starts running and so does everyone else, Rick stands there in front of the walkers approaching him while Daryl is trying to kill as many as he can from afar. There is dynamite on the bridge, Rick blows up the bridge and he is gone with the walkers, but just before, he says, “I found them.”

Carol and Maggie are holding back a hysterical Michonne. Daryl turns away, he is sad and in shock.

Jadis hears a helicopter above her head, but runs to the water when she sees Rick on the ground, she raids the helicopter and tells them to help her, she is trying to save a friend. The helicopter lands. Jadis is inside with Rick and she tells him she is going to save him as the helicopter takes off. We see a group of people and they are surrounded by walkers, a young girl saves them by shooting the walkers, it is Judith Grimes. and she is no longer a baby.