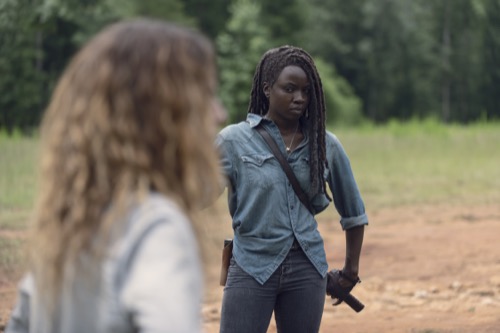 Tonight on AMC our favorite show The Walking Dead airs on an all-new Sunday, November 18, 2018, episode and we have your The Walking Dead recap below. On tonight’s The Walking Dead Season 9 episode 7 called, “Stradivarius,” as per the AMC synopsis, “Carol seeks out an old friend living alone in a wilderness teeming with walkers, while the survivors make the perilous trek to a new home.”

Rosita is running through the woods. She is hysterical, hearing the whispers. She collapses to the ground and passes out.

Carol and Henry go with Daryl to his camp. He hasn’t been eating. He hasn’t fixed the boat but he has a dog. Carol is worried.

Siddiq and Michonne bring the newcomers to HillTop together. Meanwhile, Jesus is running the place now that Maggie has left. He opens a letter from her. He is happy. Tara comes to see him. She has a list of things they need to go over. He isn’t up for it.

Out in the woods collecting from the traps, Carol and Daryl talk alone. She wants him to stay at HillTop and watch over Henry whose going there to learn at the Smithy. Daryl refuses, he needs to learn as they all did.

During their travels to get their things for HillTop, the newcomers discover that their belongings have been ransacked. They get upset. Magda cries while Luke looks for his stuff. They find out that Michonne isn’t going the rest of the way with them. DJ and Siddiq will be taking them. They all get upset when she asks for their weapons.

Jesus and Aaron meet up with a field. Aaron surprises him by taking him down to the ground. They tussle for fun and practice. They laugh and sit. They talk about how the leaders of their communities refuse to attend the fair. They hear a noise. It is Rosita in the woods, leaning against a tree. They run to her. Eugene is still out there in a barn. Nightfall is coming. They will have to wait to find him in the morning.

While dinner cooks over the fire, Carol cuts Daryl’s hair. She tells him he needs to come back and stop looking for Rick. He tells her he never found a body and staying out in the woods just got easier. During dinner, Henry asks Daryl about his scar, he doesn’t answer.

Later that night, Henry sees Daryl walking around outside his tent. He goes to see what he is doing and follows him. Daryl rescues his dog from a group of walkers and almost gets attacked. Henry helps just in time. Daryl gets mad, he asked him to stay back and out of the way.

Tara tells Jesus that Rosita is at the infirmary. She is still out but on an IV and will be okay. Jesus explains that he was meeting with Aaron to talk about the fair. Tara cannot believe he has been leaving for this. He is their leader and needs to be here more. He took the job.

Henry sees an X on the back of Daryl as he changes. They sit and talk. Daryl thanks him. Henry tells him that Carol is worried about him. Daryl Is her best friend. Daryl gets what he is getting on. Henry doesn’t care if Carol wants him to be babysat. It isn’t just about him.

Luke sits with Michonne and the others and tells them about the history of the flute and man. Music is important and helped influence civilization. He talks about sharing with one another and the survival of the fittest.

In the morning, Michonne is ready to depart from the group when Siddiq tells her Maggie is no longer at HillTop. She cannot believe it. She never knew. Suddenly a herd of walkers is upon them. They all go out to fight. Michonne allows them to have their weapons. They all team up and take several down until they recognize one of the walkers, their close friend. Michonne takes him out gently.

Carol wakes to see Daryl getting ready to go with Henry. Meanwhile, Siddiq tells Michonne that Maggie is somewhere in Georgia helping a new community. That is all he knows. Two men arrive on horseback from HillTop to tell them about Rosita. Michonne changes her mind. She’ll go.

Carol, Daryl and Henry show up at HillTop who is surprised to see them all. They get word about Rosita and find out that Eugene is missing. Jesus wants to go look. Tara tells him to, she will hold down the fort. Daryl goes too.