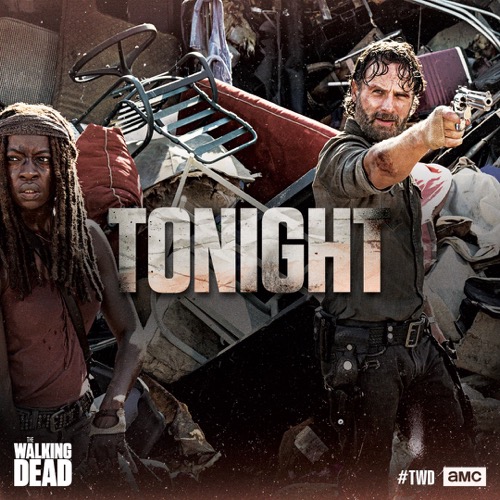 Tonight on AMC our favorite show The Walking Dead airs on an all-new Sunday,  March 4, 2018, episode and we have your The Walking Dead recap below.  On tonight’s The Walking Dead Season 8 episode 10 called, “The Lost and the Plunderers,” as per the AMC synopsis, “Groups unite their forces and converge on the Hilltop. Meanwhile, Aaron and Enid search for allies; and Simon takes matters into his own hands.”

Michonne stands behind Rick as he kneels at Carl’s grave, saying goodbye. A couple of walkers come. She kills them as he gets his gun and gets ready to leave. She looks around at their home as walkers begin to infiltrate their streets. She shuts the gate after stabbing several.

Michonne heads home. On the front porch, she sees Carl and Judith’s handprints. She begins to cry. She looks and sees walkers coming in the distance. She heads in and tells Rick it is time to go. They pack up the van and then head to put out a fire without success killing walkers in their way. They leave Alexandria behind.

In the van, Rick asks Michonne what she thinks Carl met. Does he want them to surrender? To stop fighting Negan? Rick tells her that he needs to talk to Jadis. They still need them. They head to see the garbage people.

Negan calls his men and demands they keep looking for Rick and his people. He is waiting for a call from Gavin, he tells Simon, who wants to know what he should be doing. Simon wants to move on from Rick and his people and cut their losses. Negan gets mad. He thinks once he clips Rick everything is aces again. Some of his men bring in a delivery from the Hill Top with a message written across the top that says stand down. Inside it is Dean. He has already turned. Simon is angry and wants to go out and kill them all. Negan yells, demanding him to do his job.

Enid and Aaron are brought into a home at Oceanside. The women leaders shackle them to the wall and leave so that they can talk outside. Minutes later, Cindy and the others come back in and unshackle them. Enid tells Cindy she is making a mistake if she is planning to kill them. She can kill them but Rick and the others will come back and wipe them out. Cindy lets them go. She and her people aren’t going to fight alongside. Her contribution to the cause is to let them leave. She tells them never to come back again.

Enid and Aaron walk a short distance from Oceanside. Aaron tells Enid to leave and go back home to see Maggie. He is going to stay behind and talk Oceanside into fighting. Enid doesn’t want to separate but they both agree and promise each other they will be okay if they separate.

Simon reports back to the guys that they are headed to see the garbage people. They arrive. Jadis and her people point their weapons at them. Simon tells them to relax. He tells Jadis he is going to need an apology since she made a deal with Rick. Jadis tells him she had no deal with Rick. She delivered him and they shot him. Simon tells her bullshit but no need to worry. Negan has decided to give them a break. All they need to do is give him and his men their guns and ammunition. They will protect them. Jadis agrees. They take the gun. Simon asks her why she chose the dump. And he wants to know what the deal is with the solar panels in the back. Jadis plays stupid. Simon still wants an apology. When Jadis isn’t sincere enough he shoots two of her people. She punches him in the mouth, knocking him down. He gets up and laughs before telling his men to light it up.

Simon and his men report back to Negan. He assures him he delivered the message to Jadis and her people after Negan asks him how it went. One of the Saviors brings a walkie to Negan – it is Rick.

Rick and Michonne climb a pile of trash to find Jadis sitting on top. She is devastated. Michonne asks her what happened. She only answers – The Saviors. She begins telling them how she came to live at the dump before asking them if she could come with them. Rick tells her he is done with her games. They create shields out of the trash and get to the exit. She begs to come with them but Rick shoots his gun in the air before leaving.

Later, Jadis lures her people who have turned into zombies into the grinder in the dump. She watches them as they fall to their death before they are torn to shreds.

Rick is emotional in the van while he drives with Michonne. He tells her that he didn’t want Jadis dead. He just wanted her gone. He pulls over on the road and tells Michonne he just needs a second. Rick decides to look at the note that Carl left for Negan. Rick radios Negan. Negan gets on the radio. Rick tells Negan that Carl is dead. Negan is silent. Rick tells him that Carl asked them to stop fighting, he wanted peace. Rick tells him it is too late though. He is going to kill him. Negan asks how Carl died. Negan is upset that Carl is gone, he was the future. Negan tells Rick that Carl is dead because of him. He needs to let this all go before he gets anyone else he loves killed. He failed as a father.