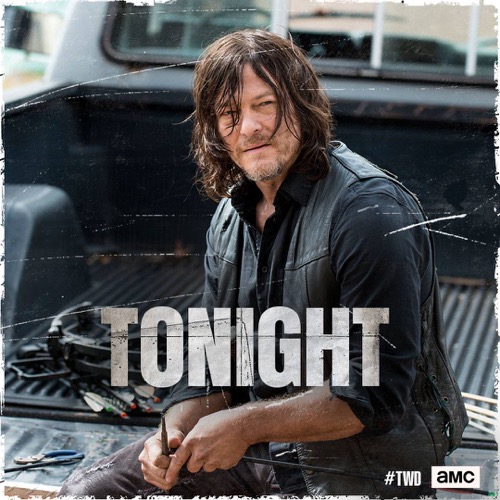 Tonight on AMC our favorite show The Walking Dead airs on an all-new Sunday,  April 1, 2018, episode and we have your The Walking Dead recap below.  On tonight’s The Walking Dead Season 8 episode 14 called, “Still Gotta Mean Something,” as per the AMC synopsis, “A Heaps prisoner makes a discovery; Carol searches for someone in the nearby forest; Rick and Morgan find themselves in the company of strangers.”

Gunshots erupt in the junk yard. People are screaming. Jadis throws herself to the ground and pretends to be dead. A Savior comes by and looks at her. He falls for it and spits on her before leaving. When the coast is clear she heads into her home and cries as she packs up. She regains her composure as she grabs Negan’s bat. She heads outside and into a storage unit with the bat. Negan is in there, flat on his back and tied up. He asks her “what the shit” as she drags him out.

Inside the Hill Top, Carol splits wood. Ezekiel comes to see her. He wants to head out to find Henry. Carol says she will stay behind. He is mad. She must have faith and she clearly thinks he is dead.

Tara comes from the hospital to see Daryl. The doctor thinks she is healthy after she was shot with an arrow by Dwight. Daryl is still angry at Dwight, he could have warned them what the Saviors were doing.

Rick comes into the bedroom to find Michonne crying as she reads a letter from Carl. He comforts her. She asks him if he wants to read her letter? He silently says no. She asks what Carl wrote to him. He hasn’t read it yet. I can’t, he tells her. He tells her he needs to go look for food. Michonne tells him he is going to stay and read it. It was one of the last things Carl did. She leaves the room. He opens a draw to look at the letter.

Carol sees Morgan. She asks him if he is going out to look for Henry and the others. She offers to go with him.

Rosita, Maggie, Daryl and Diane talk about what they are going to do. They don’t have enough ammo to fight again. Eugene must be making the Saviors bullets.

Tied up on the ground in the junkyard, Negan tells Jadis that he did not command his people to kill her people. He apologizes. As he talks, promising her he can help her, she swings Lucille right at his face. But stops abruptly, bringing him to silence.

Out in the woods, Morgan thinks he sees Henry. He runs after him. He talks to him. Carol watches as Morgan talks to the air. She tells him she came to keep an eye on him. Morgan tells her he just sees the dead, again and again.

Rick cannot sit any longer in his room. He grabs his gear and goes to talk to their prisoner who stayed behind after Henry opened the gate. Rick asks him where he thinks the people went? He tips him off about an outpost. He asks Rick to try not to kill unless he has to. He could always bring them back to the Hill Top.

Jadis goes to grab a walker that is strapped to a cart. She is about to wheel it to Negan who is on the ground. He has pulled a gun out of nowhere. She hides for a bit. He tells her to come out so they can chat.

On the road, Carol and Morgan find Henry’s staff. Carol tears up. She wants to take the other road. He cannot go. She asks him to try. Maybe they will find him. He tells her no. She saves people and he watches them die. He walks off after handing her Henry’s staff.

A helicopter flies over the junkyard. Jadis tries to get their attention with a floor. But they don’t see her. She cries. She threatens to burn Negan’s bat. He begs her not to. He can settle what happened to her. He will fix it.

Out in the woods, Morgan comes up on someone. It is Rick. He tells Rick he isn’t right. Rick tells him that together they will finish it. They come out to the road together. There is a car with blood on the pavement in front of it with a foot and hand that has been cut off. Someone rushes Rick from out of nowhere.

Rick comes to. He is sitting in a dark room next to Morgan. They have been taken hostage by the prisoners of Hill Top who are fighting about their plan to deliver Rick to Negan. Some of their people are sick and injured. They don’t know if they leave them or get them help. Rick offers them a fresh start. They can bring the sick to Hill Top and start fresh. Rick gives them his word. Jared laughs and warns them that Rick is lying. Rick warns them that a herd is close by and coming. Morgan warns them, yelling as he does so. Jared points the gun at him. Growls come from outside. Within seconds the dead is spilling in. Rick and Morgan break free and start fighting. They kill the dead and the prisoners. Jared runs off. Morgan follows him. In the dark, Morgan thinks he sees Henry. He pauses. Jared jumps him. They fight. Morgan pushes him into a pit of walkers and pulls a gate shut. Jared is on the other side. He screams as Morgan watches him get eaten alive.

Morgan and Rick meet up. Rick tells Morgan that he saved him. Why did he save him earlier on the street in front of his house all the years ago. Morgan admits it was because his son was there. Morgan walks off. He wants to go. Rick looks at himself in a nearby mirror.

Negan approaches Jadis who is looking at photos. He has his leather coat on and bat in hand. He asks her if she wants to come with him, start a new path. She tells him no. He tells her that the offer still stands. Maybe he will swing by sometime.

Out in the woods, Carol hears crying and growling. It is Henry. She saves him and brings him back to Hill Top. They enter the gates. Henry runs to Ezekiel.

Carol and Ezekiel sit by the fire. She tells him about her daughter. After she was killed, she reinvented herself because of the people she was with. Sometimes she is afraid that can all be swept away. The gate opens. Rick and Morgan come in. Morgan sees Henry. He tells him that he killed the man who killed his brother. Henry tells him sorry. Morgan tells him never be sorry.

Morgan sits alone in the dark and cries. Meanwhile, Negan arrives back at home. He tells one of the Saviors not to share that he is alive. He has a whole lot of surprises for them.

Rosita and Daryl watch as the Saviors unload supplies to make bullets.

Rick is in his bedroom. Michonne comes in. he tells her he is sorry and that he loves her. She tells him he doesn’t have to be sorry. She loves him too. He pulls out the letter Carl wrote him.