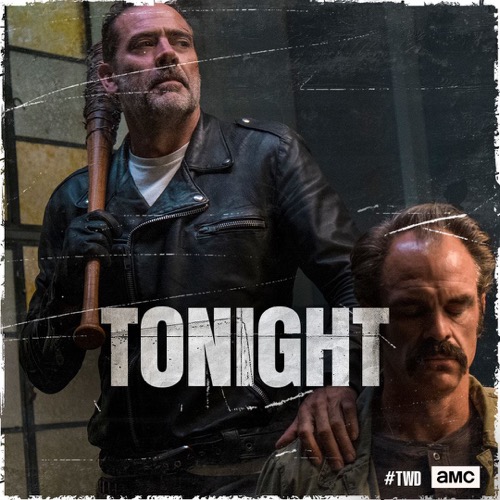 Tonight on AMC our favorite show The Walking Dead airs on an all-new Sunday,  April 8, 2018, episode and we have your The Walking Dead recap below.  On tonight’s The Walking Dead Season 8 episode 15 called, “Worth,” as per the AMC synopsis, “With the threat of the Saviors still looming, Aaron continues searching for allies. Daryl and Rosita take action and confront an old friend.”

Rick sits outside in the sun on the porch. He reads Carl’s letter as he cries. Carl tells Rick that he wants him to feel safe like he did be he was a kid. He wants Rick and the others to find peace, to rebuild and forgive. Rick peers out to see Michonne and Judith walking together.

Michonne is lying on the bed. She sits up. She looks at the dresser. Opens the drawer and grabs the letter Carl wrote to Negan.

Simon is sitting down with Gregory. The two are having a drink while Simon tells him he is the new leader of the Saviors. Simon is angry because Gregory made him look stupid and now he needs to make an example of him. Gregory gets too confident when he stands up and spouts off at Simon. Simon gets up and takes him down to the ground.

Eugene dishes macaroni and cheese into a bowl as two of the female Saviors talk to him. He recalls his college days when he would eat macaroni and cheese with sardines. He tells the ladies that he needs this email for the entirety of the project. He begins to eat and pace while he tells the rest of the team that Negan isn’t around. Simon is in charge and he wants them to ramp up their production. Gabrielle begins to cough. He takes off his mask. Eugene tells him. He tells him to put the mask back on. They don’t want to get sick with whatever he might have. He must wear the mask until he finishes his meds. Eugene hands him a bullet. He is not making them right. Gabrielle admits that he isn’t making them right because he doesn’t want his people to die. Eugene tells him that they are his people now. Or he can die. He kicks him off the line.

Eugene comes out of the warehouse and into the sunlight. The Savior in front of him gets an arrow to the forehead. Daryl and Rosita rush up and grab Eugene at gunpoint.

Negan comes out of one of the buildings. Dwight looks up to see him. He is surprised. Negan tells him what Rick did to him was a punch in the d**k. He asks Dwight if he remembers who he is as part of the Saviors go? Dwight tells him that he is Negan. Negan doesn’t want him to forget it.

Simon is speaking at Negan’s meeting with the leading Saviors. Simon would like a pass on his screw up. He will make it up to Negan. After swinging Lucille around, Negan forgives Simon. Negan starts to discuss their plan of attack. Simon likes the plan. Negan ends the meeting but asks Dwight to stay. They have some things to kick around.

Negan commends Dwight on going about his business even after he took his wife. He tells him to keep his mind clear.

Eugene’s hands are zip tied as Daryl and Rosita walk him down the road. Eugene is rambling. Daryl turns around and threatens him. Rosita intervenes. They keep walking. Eugene tells Rosita that Negan showed him mercy. Rick should have never jumped into this shit storm. Rosita gets mad and turns on him. She tells him he is a traitor and a coward.

Simon knocks on Dwight’s door. He wants to have a serious talk. All of them are not happy that Negan is back. Simon wants them all to do what they need to do. They will meet up in the courtyard later.

Daryl, Rosita and Eugene come up to a group of walkers. While Daryl takes them out, Eugene makes himself throw up right on Rosita. He runs and hides while they chase after him.

Aaron is out in the woods. He is resting as it rains. Walkers approach. He cannot find his weapon. He grabs for anything. He finds a stick. He takes them out and falls after into the mud. He lay there. Moments later, Rachel and the other women look at him wondering if he is dead. He comes to. He tells them that they can blame Enid all they want for their sister’s death but the Saviors are going to kill them all unless they fight. He falls back into the mud.

Outside, Dwight paces back and forth for the others. They come out. Simon addresses them all. If you are here right now, you are in. You cannot change your mind. Simon thinks they need to kill Negan fast out of respect for what he did manage to do for them. He offers Dwight the honors of killing Negan. Then they take out Hill Top. Whistling comes out of nowhere. It is Negan. He counts down. Shots are fired. All of the leaders of the Saviors are taken out except Dwight, Gregory, and Simon. Simon lunges at Dwight. Why would he do that? Negan knows what Simon did to the garbage people. Now he is going to give Simon to try and beat the man if he wants to be the man.

Inside the warehouse, Negan and Simon fight as a circle of Saviors stand around them watching. As they fight, Dwight pushes Gregory to the side. He tells him to go. He gives him a note for Rick. Meanwhile, Negan crushes Simon’s windpipe and kills him.

Gregory makes it to Hill Top. Maggie watches him from the outside as they let him in. He gives them Dwight’s note.

On the way back into the warehouse, Negan promotes Dwight to his right-hand man. Negan has a surprise for Dwight when they reach his room. It is one of the female Saviors he tried to kill as he turned on them to help Maggie and the others. Negan knows all about what Dwight has been up to. He knows that Dwight has been relaying intel to Rick and the others. Too bad the plan Negan told him will lead Rick and the others into the line of fire. Negan threatens Dwight. He has plans for him.

Eugene arrives back to the Saviors. He gets word that Negan is back and that he will need the bullet order by tomorrow morning.

Negan sits outside watching the grounds. Simon is now a walker chained to the fence. Michonne radios to Negan. He answers. Michonne needs to read Carl’s letter to him because that was what Carl wanted. Carl talks about peace and letting go. He wants Negan to stop fighting. Negan doesn’t want to stop. Winning for him is killing all of them, he tells Michonne before breaking the walky-talky.