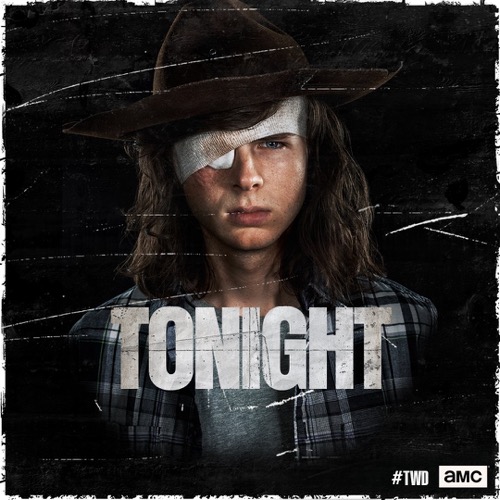 Tonight on AMC our favorite show The Walking Dead airs on an all-new Sunday,  February 25, 2018, episode and we have your The Walking Dead recap below.  On tonight’s The Walking Dead Season 8 episode 9 Winter Premiere called, “Honor,” as per the AMC synopsis, “Rick and the group deal with the revelation of Carl’s fatal walker bite as the war against Negan and the Saviors continues.”

It’s the future, a white-haired Rick and his daughter talk to Jerry as he works outside. Present day, Rick and Michonne are digging a hole. Michonne breaks down and cries in pain.

Back to the past, Carl strips down in the bathroom after being bit. He looks at his wound. He dresses it while looking sad. He heads to the wall where he gets a letter from Michonne telling him she had to see it for himself. He heads back home and writes several letters. He rocks his sister in the chair on the porch. They take a Polaroid picture together. He helps his friend in the next couple of days while planting a tree.

Morgan is staked out in an adjacent building watching the saviors. They make it out of their building and past the walkers. Shots are fired. He runs for it and heads outside. He catches the attention of a group of walkers and leads them to one of the doors to attack out coming saviors.

It is night. Carol kills a walker as some of the Kingdom people watch. She tells them she is headed out with Ezekiel.

Rick and Michonne stare at Carl’s bite in disbelief. Rick has no words. Carl comforts him. Carl takes out his letters and hands them to Michonne. She shakes her head as tears fall. Carl tells them it was an accident. It wasn’t the Saviors. Meanwhile, Ezekiel sits calmly listening to one of the Saviors tell him he is going to die. Morgan and Carol meet up. They are outside plotting on how they will take the Saviors.

Michonne makes Carl comfortable on a cot. Carl’s friend offers some anti-inflammatory. He used to be a resident. They helped his mom and dad. Rick questions Carl about him. Outside, bombs are going off. Michonne gets angry and demands Dwight make it stop as they all watch her plead inside the drain pipe. Rosita asks Dwight if Hilltop is safe. He tells them it is. She thinks they all need to head there. Dwight tells them it isn’t safe. Once the Saviors leave, they should head out. Daryl agrees. Once they get there all together, they will be the Saviors worse damn nightmare.

Morgan and Carol watch the Saviors from the shadows. They need to get through some of them to make it through the courtyard. Together, they take out several guys quietly. More come down a set of stairs as they watch. They kill them.

Michonne comforts Carl. He tells her all of this has to stop. It can be better. They all hear the Saviors leave. Daryl isn’t so sure. He wants to go take a look.

Carol and Morgan head into a house. Morgan hears voices on the side of the building. He sees 3 men. Carol tells him to leave it but he can’t. He kills two and Carol kills one. Meanwhile, one of the top Saviors commands some of the men to leave room for Ezekiel in the back of the truck. They are taking him with them. The leader radios to his men. None of them are answering. He starts to get nervous. Ezekiel tells him it isn’t too late to change his mind. Gunshots come from the distance. They all run for shelter inside. Morgan comes out of the shadows.

In the future, Rick and Judith run into Eugene. He is inventing something to cook apples. He offers Judith an apple.

Michonne tells Rick it is safe for them to leave. Rick tells her that Carl will not make it. He needs to stay with Carl. Daryl offers to take Judith so Michonne can stay. Carl asks to say goodbye to her. They all watch as he tells her to be good. He gives Judith his hat as he cries. He recalls how his mother told him he was going to beat this world before she died. He didn’t but maybe she will. Judith cries. Daryl takes her. Before he goes he tells Carl that he saved all of these people. Carl’s friend promises to honor him even if he cannot repay him. He says goodbye and heads down the tunnel.

The Saviors hide out in the auditorium of the Kingdom. Carol and Morgan break-in and fire. Ezekiel manages to grab a gun. Morgan begins fighting one of them who has a stomach wound. He pulls his intestines right out of him before shooting at the top leader who makes a run for it.

Michonne and Rick make Carl comfortable as he lay dying on the cot. Carl tells Michonne that he doesn’t want her to be sad or angry after he dies. He wants her to be strong for herself and everyone else. He tells her that she is his best friend. Rick asks her to help him get Carl out of the tunnel.

Morgan hunts down one of the leaders of the Saviors. Meanwhile, Michonne and Rick carry Carl to one of the houses that aren’t on fire. Morgan finds the Savior. Michonne and Rick lay Carl down inside the building. Carl thanks them for getting him this far. Rick cries. Carl recalls being back at the prison when he saw a kid with a gun who was a little older than him. Carl shot him just as the kid was giving up the gun. He feels guilty.

Morgan pushes the man who calls him sick. He begs to go back to the Hilltop.

Meanwhile, Rick tells Carl not to feel guilty. He was just a boy. All of the things he had to do. Morgan threatens the man with the sharp end of his staff. Carl tells Rick that he changed. When he put away his gun that helped him change too.

Ezekiel and Carol come up on Morgan. Ezekiel tells Morgan to stop. Carol reminds him that he said they can be better than them. Morgan tells her he has to.

Carl tells Rick that he doesn’t have to fight and kill like this. Before Morgan can kill the Savior Henry does with his own staff. Meanwhile, Carl tells Rick what he imagines his dad’s future to be if he stops the violence. He sees Rick with a beard, an older Judith and a community who are all happy. He wants his dad to have it. Rick promises that he will make Carl’s vision real.

Ezekiel comforts Henry. Meanwhile, Rick says he is sorry to Carl for not protecting him. Carl grabs his gun. Michonne pleads with him. He tells them he needs to do this. Michonne cries. Carl tells Rick he loves him. Rick cries and kisses him. He promises to make it real. Sometime later, Rick and Michonne hear Carl’s gun go off. They both sob. They dig Carl’s grave.

Judith is walking down a path of planted fruit. She says hello to Negan who is gardening in a plaid shirt with a smile.