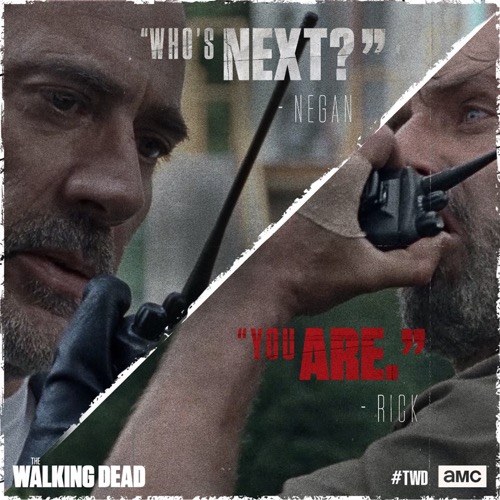 Tonight on AMC our favorite show The Walking Dead airs on an all-new Sunday,  March 11, 2018, episode and we have your The Walking Dead recap below.  On tonight’s The Walking Dead Season 8 episode 11 called, “Dead or Alive Or,” as per the AMC synopsis, “Daryl finds himself in bad company as his group heads to the Hilltop; Maggie makes difficult decisions at the Hilltop; Gabriel’s faith becomes tested.”

The Saviors are out looking for Rick and his people. They get called away by walkie. Right after they leave, Daryl, Tara, Dwight and the rest of the survivors come out of hiding in the woods. They make a run for it.

Gabriel and Carson are sitting in the car. They are lost. Gabriel is trying to figure it out on the map but his vision isn’t doing well. He tells Carson to have faith. A walker crawls across the ground, dragging a chain. The car won’t start. They get out. Carson examines Gabriel who hears something. He begins walking. Carson follows. They see a house. Gabriel thinks it could be their salvation.

Rosita catches up to Daryl on their path. She tells them the others need to rest. Tara has a question – she asks angrily why Dwight is still breathing. Daryl tells her they aren’t going to deal with it now.

Carol comes to see Morgan and Henry sitting. Henry won’t eat. Meanwhile, Negan is mad as he sits across the table from Eugene. He wants to know how Carson and Gabriel jumped ship? Eugene asks what happened with Rick and the others. Negan asks him if he really cares. He tells Eugene that he is going to be in charge of his own outpost. He needs him making bullets and keep his head in the game.

Gabriel sits inside the house they have found, looking around. Carson comes in and reports that it is clear so far. Gabriel keeps looking around, as he searches for clues to where they might be and who once lived there. Carson hears a noise. He charges into a bedroom and finds what must be the own turned with a plastic bag on their head, laying on the floor. Pill bottles lay all around the zombie.

Daryl and the others take a break. They discuss what path they should take. Dwight tells them the safest route is through the swamp. Tara cannot believe Daryl and Rosita are willing to trust him. Dwight tells them all that he isn’t going to be around for long. He knows he will die soon, most likely at the hands of Negan.

Maggie goes over the dwindling rations they have left. Meanwhile, Gabriel holds back on preaching about keeping the faith when Carson is thrilled to find 2 bottles of antibiotics on the floor.

Dwight tells Daryl he hopes Sherry is still alive somewhere out there. They come up on the swap.

Maggie comes to see Gregory who is still behind barbed wire. He tells her his behavior is good. He would like to come out. She refuses. The other prisoners start to plead. She tells them she is cutting off their rations. She doesn’t have a choice. Her people come first.

Rosita, Daryl, and the experienced ones from Rick’s group try to clear the swamp. Walkers pop up from under the surface in groups.

Carson checks Gabriel’s eyes again. As Gabriel expresses his gratitude for just being alive he knocks over a piggy bank. It breaks. There is a map and keys inside.

Tara and Dwight walk. She keeps a gun on him as he kills walkers. He apologizes for Denise. Tara points the gun at him. He tells her killing him right now isn’t going to help. She thinks it will make her feel better. She shoots, missing him. He runs. She catches up when he slows. They hear voices and hide in the bushes. It is a group of Saviors. She puts the gun to his temple just in case he tries to yell.

Carson walks around the house looking for the car. Gabriel hears a noise and warns him to look out. He walks into a bear trap. He drops to the ground in pain. Walkers come out of nowhere. Gabriel searches for the gun on the ground with little eye sight. He shoots and manages to kill the walker on top of Carson.

The Saviors get so close to the bushes, Dwight jumps out. He tells them he has been hiding out all night. He leads them odd in the opposite direction. Tara stays quiet. Rosita comes up behind her. They head back to Daryl and the others. Daryl screams in Tara’s face. He is angry. What if Dwight tells them everything? Tara tells him that he won’t.

Carson and Gabriel make it to the car. They are relived. The Saviors come out of nowhere. They load them in the bed of the truck. Gabriel tells Carson that if he pays attention he will see God is still leading the way. Carson agrees as he eyes the gun at one of the Saviors’ side. He lunges for it. Another Savior shoots him in the neck. Gabriel sobs as they all drive off.

Daryl and the others make it to Hill Top. Carol and Enid welcome them at the gate with smiles. They tell them about Carl. Enid cries hysterically. Maggie holds her. Later, Carol sits with Morgan and Henry. Henry asks how Carl died. Carol explains that he was helping a stranger. Morgan tells Henry that Gavin was the one who killed his brother. Abbud comes to see Maggie. He thanks her for her hospitality. He would like to help. He has medical experience. Maggie smiles.

Eugene is working on his bullets. Negan arrives. He brings Gabriel with him. Negan tells him he knows how Gabriel and Carson got out. Eugene looks scared. Gabriel shares that it was Carson.