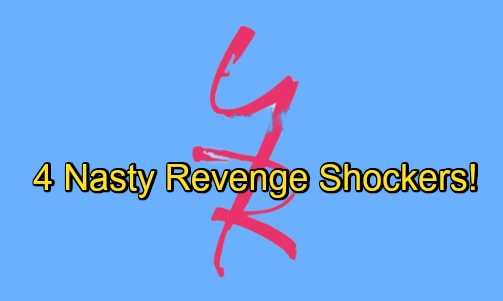 The Young and the Restless (Y&R) spoilers tease that revenge should be a common theme soon. Y&R fans know the show’s storylines follow a familiar pattern. Some characters make a mistake, they keep it a secret until everything explodes and the fallout brings serious drama.

Of course, vengeance is often a huge part of that fallout. That should be the case in several stories that are already underway. Let’s consider a few characters who’ll be prime candidates for seeking payback. We should also mull over how they might pull it off! Here are four revenge shockers to watch out for.

Devon’s (Bryton James) revenge mission has already begun, so we should look ahead to the next phase of all this. The Young and the Restless spoilers say Devon will ask the judge for the harshest sentence possible. He won’t care about Lily’s (Christel Khalil) family and how much they’ll suffer. That should leave Cane (Daniel Goddard) furious if Lily finds herself in prison.

Cane can be a pretty sneaky guy when he wants to be. Considering his history, he should be able to pull off a few dirty tricks. You can bet he’ll strike back if Devon brings this kind of pain to Lily and the kids. Even if Cane could put his own sorrow aside, he’d want revenge for Charlie (Noah Alexander Gerry), Mattie (Lexie Stevenson) and Sam.

Y&R spoilers say Summer (Hunter King) will accept a deal to keep her mouth shut about Phyllis (Gina Tognoni) and Nick’s (Joshua Morrow) hookup. Of course, that plan may not pan out for long. Summer’s determined to get in Billy’s (Jason Thompson) bed, so she may not be able to resist sharing the news.

If Summer’s responsible for the truth getting out, Phyllis will definitely make her pay the price. Summer may even go down if the secret comes out another way. By going after Phyllis like this, Summer’s definitely taking their war to the next level.

3. Billy and Nick’s battle heats up

That brings us to another revenge plot. Billy will inevitably want vengeance when he hears about Phyllis and Nick’s one-night stand. The Young and the Restless fans will recall that Nick and Billy butted heads recently. They ended up with black eyes after a heated disagreement, but things could be far worse next time!

4. Rey takes down the cover-up crew

No one knows the details of Rey’s (Jordi Vilasuso) agenda just yet, but it’s possible he has a personal connection to J.T. (Thad Luckinbill). Perhaps they worked together at one point. He may be quite concerned about what might’ve happened to him.

Regardless, the cover-up should be terrified of what Rey has in store. His digging should land Phyllis, Victoria (Amelia Heinle), Nikki (Melody Thomas Scott) and Sharon (Sharon Case) in hot water. Sharon may not even have time to take her own revenge on betraying Nick! She just might be too busy with courtroom chaos.