BY Kinsley Goldman on September 27, 2018 | Comments: one comment
Related : Soap Opera, Spoiler, Television, The Young and the Restless 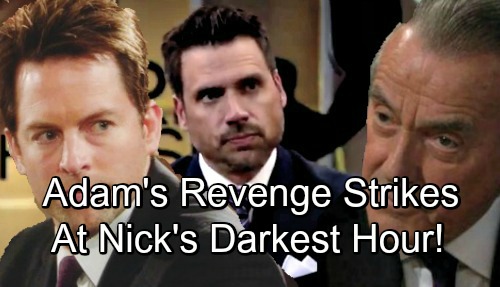 The Young and the Restless (Y&R) spoilers tease that Nick’s (Joshua Morrow) world could completely fall apart. He’s on the verge of losing the woman he loves, so that could kick off major destruction. Nick made a mistake when he slept with Phyllis (Gina Tognoni). He truly wants to be with Sharon (Sharon Case) and work toward a bright future together.

Unfortunately, it appears Summer (Hunter King) is right about their impending marriage. It’s doomed! The Young and the Restless spoilers say the hookup news will come out eventually. Sharon’s fury and despair should lead to a breakup. She may dump Nick on the spot over his terrible betrayal.

Sharon’s been battling doubts about Nick anyway, so this should be the final straw. To be fair, Sharon’s keeping the details of J.T.’s (Thad Luckinbill) death to herself. That’s not ideal, but that doesn’t affect their relationship quite like this. Sharon’s not the one who hoped in bed with an ex at the first sign of trouble!

Once Nick loses Sharon, he may lose the only thing keeping him on the straight and narrow. Sharon’s been worried about Nick turning into his ruthless father. What’s to stop him from becoming Victor (Eric Braeden) 2.0 after this? Y&R may let Nick become the bitter, devious Newman he’s destined to be. At least he might think that’s his destiny!

Of course, he wouldn’t be the Nick that Young and the Restless fans know and love. People will want Nick back to his softer self eventually. That’s why this storyline would be the perfect setup for an Adam Newman recast. Nick will need a more cunning brother to swoop in and make him look tame in comparison.

Plus, The Young and the Restless may need a path of redemption for Nick. To reach that point, they’ll have to let things grow darker than ever. Adam could return from the dead, get off the hook for that prison guard attack and plot a Dark Horse takeover. He might blame Nick for the chaos that led to Chelsea (Melissa Claire Egan) going on the run.

Adam could even make a play for custody of his biological son, Christian (Jude and Ozzy McGuigen). In other words, Nick could lose almost everything he holds dear. The Young and the Restless spoilers say Nick definitely has major drama ahead of him. Will Adam’s comeback pack the worst punch?

Y&R viewers would love to see Adam in town again, so stay tuned to see if that return’s in the works. We’ll give you updates as other Y&R news comes in. Stick with the CBS soap and don’t forget to check CDL often for the latest Young and the Restless spoilers, updates, and news.