The Young and the Restless Spoilers: Billy and Sharon Hook Up After Phyllis and Nick Reconnect – Shocking Love Interest Swap?

The Young and the Restless (Y&R) spoilers reveal that some fans are open to a pairing that would really shake things up. Y&R let Billy (Jason Thompson) and Sharon (Sharon Case) share some nice scenes recently. It seems obvious that Sharon and Nick (Joshua Morrow) will end up back together eventually, but that doesn’t mean there won’t be some detours. Perhaps Billy could be one of them!

Billy and Sharon probably aren’t destined to have some great love story, but a hookup isn’t out of the question. Let’s consider how this could play out. First, we’ve got meddling Phyllis (Gina Tognoni). Billy was miffed when she got so involved in Chelsea’s (Melissa Claire Egan) chaos and the paternity drama that followed. He felt like she was obsessed with Nick’s (Joshua Morrow) love life.

Of course, Phyllis is once again interfering. Now she’s determined to keep Sharon (Sharon Case) and Nick apart. Billy isn’t thrilled about Phyllis’ constant attempts to coddle Nick and shut down Sharon. He’d much rather focus on their own relationship, but The Young and the Restless spoilers say Phyllis will continue to make that difficult. 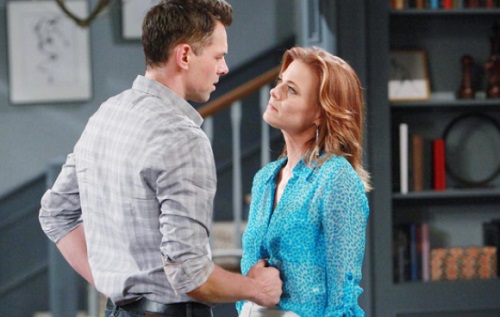 Phyllis certainly has a history of cheating, so all this bonding with Nick could spell trouble. If they kiss or have sex, that would devastate Billy. “Philly” went through a lot to be together, so Billy would feel like none of that mattered anymore. He’d think he was just another notch on Phyllis’ bedpost.

Naturally, Sharon would be just as crushed. She has strong feelings for Nick, so she’s been making some blatant attempts to win him over lately. Sharon’s online date was all about stirring up some jealousy. Nick felt like the timing was off after their lip lock, so Sharon would be furious if she learned he caved to Phyllis instead of her. She might decide to do something pretty shocking!

Maybe Sharon and Billy could comfort each other with a sex session. It’d be fitting if Nick and Phyllis have been getting busy by then. However, we can’t rule out some confusion. Sharon could overhear something that makes her think Phyllis and Nick reunited sexually. If it’s not true and Sharon finds herself in bed with Billy, that’d create quite a secret.

Whatever the case, Y&R should get back to the romantic angst once J.T.’s (Thad Luckinbell) mayhem winds down. Would you like to see Sharon and Billy hook up? Could you buy them as a couple or would you prefer a fun fling? We’ll give you updates as other Young and the Restless news comes in. Stay tuned to the CBS soap and don’t forget to check CDL often for the latest Young and the Restless spoilers, updates and news.