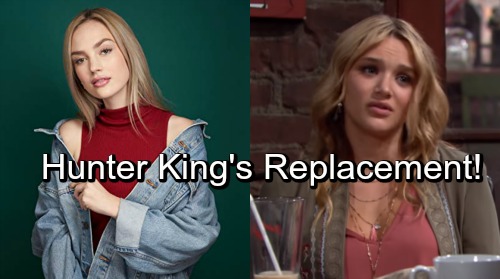 The Young and the Restless spoilers has some late breaking casting news to report. According to TV Insider, Hunter King, who portrays the rebellious Summer Newman on the CBS soap, is being temporarily recast. King will be replaced by Bayley Corman for three consecutive episodes beginning on Monday, October 1st.

The temporary recast was necessary due to King’s filming schedule on her other gig, the CBS primetime sitcom Life In Pieces. King has portrayed Clementine Hughes on Life In Pieces since the series began in 2015, first as a recurring character, then as a series regular.

King is committed to pulling double-duty on both Life In Pieces and Y&R, but occasionally scheduling conflicts do occur. Luckily, Bayley Corman was able to step in and fill the role while King needed to honor her commitment to Life In Pieces.

Bayley Corman is new to daytime, but has appeared in several primetime series, including 2 Broke Girls, Jane The Virgin, and Modern Family. She has also appeared in the TV Movie Christmas in Angel Falls, and will be seen in the upcoming pilot for the new TV series All American.

Corman will be stepping into the role of Summer Newman at a time when Summer’s got a lot of drama and angst going on. Summer has just been dumped as a romantic interest (and even as a friend) by Kyle (Michael Mealor), and will have to watch Kyle form a new bond with newcomer Lola (Sasha Calle). Plus, her relationship with mother Phyllis (Gina Tognoni) is barely there. It will be interesting to see Corman’s take on the pouty and manipulative Summer Newman.

Are you excited to see a different take on the character of Summer Newman? Stay tuned to the CBS soap and don’t forget to check CDL often for the latest Young and the Restless spoilers, updates, and news.