The Young and the Restless Spoilers: Brother Shocker Ahead – Victor and Jack Have Same Father, Kyle Helps Solve Dina Mystery 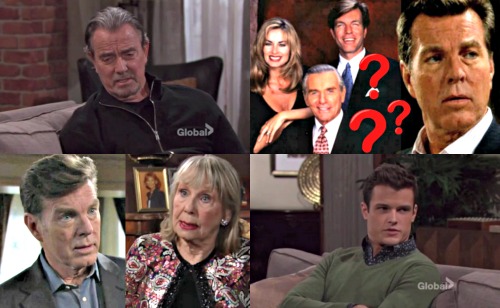 The Young and the Restless (Y&R) spoilers tease that Kyle’s (Michael Mealor) family will leave him frustrated. He’ll feel like an outsider, but he only has himself to blame. Kyle was plotting against Jack (Peter Bergman) behind his back. To make matters worse, Kyle teamed up with Jack’s worst enemy!

Victor (Eric Braeden) will remain a loyal ally and confidant – at least for now. The Young and the Restless spoilers say Kyle will open up to Victor about something significant. They’ll sit on the sofa and gab about a deep, dark secret.

Kyle will mention that Ashley (Eileen Davidson) and Abby (Melissa Ordway) are keeping something from him. He’ll note that they don’t want him to know some news Dina’s hiding. Victor will agree that this is quite intriguing. He’ll assume Dina has some incident in her history that they want to stay private.

Once they’ve established that, they can mull over possibilities. Kyle and Victor might throw out some guesses about what the secret could be. For example, they may speculate about a crime Dina committed or something along those lines. They might think the Abbotts fear Dina will spill something thanks to her Alzheimer’s and stir up trouble.

However, Victor and Kyle could get one step closer to the truth if they really think about this. They may realize that only Dina, Ashley and Abby seem to know the truth. Kyle and Victor could think it’s strange that Jack’s being kept out of the loop as well. They may wonder if the secret pertains to him in some way.

Y&R fans know Jack’s paternity is what Abby and Ashley want to keep under wraps. He’s not a true Abbott according to the DNA test results. It’s doubtful Kyle and Victor will figure that out just yet, but they’re on the verge of a breakthrough. They may crack the case sooner or later.

Of course, everyone’s wondering who Jack’s biological father might be. If they’re introducing this mystery, they have to reveal the answer at some point. Could Jack’s dad also be Victor’s father, Albert Miller (George Kennedy? It would be a great twist if Jack and Vic have been brothers all this time and didn’t even know it.