The Young and the Restless Spoilers: Cane Couples With Victoria In New Year – Fragile Ashby Family Leads To New Love?

BY Sean O'Brien on December 23, 2018 | Comments: one comment
Related : Soap Opera, Spoiler, Television, The Young and the Restless 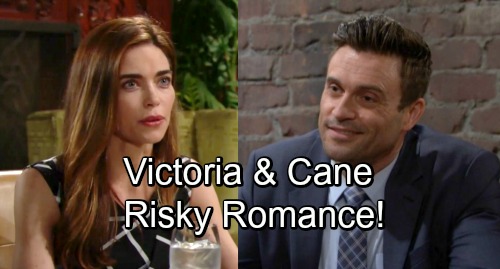 The Young and the Restless spoilers tease that Cane’s (Daniel Goddard) emotional despair will lead to him acting out. That’s why his link to Victoria (Amelia Heinle), through Meed, creates a romantic opportunity in the new year. Yes, even though Villy appears to be primed for a comeback.

Lane’s forced split is as tragic as the loss of Hevon’s unborn child and Hilary’s (Mishael Morgan) expiration. As a result the love of her life has naturally been through off emotional course.

Lily’s (Christel Khalil) jail sentence resulted through this actor’s voluntary choice to work on recurring status, rather than regular.

Khalil wisely took to social media to fully detail that the decision was hers, so that she could spend more time with her young child and pursue some other professional projects, that Y&R asked her to remain a regular part of the cast, and that she looked forward to playing her alter ego moving forward.

Her assertive actions helped to control the narrative and prevent natural speculation as to why Lily was seemingly being written out of the story.

One impact of Lily’s incarceration involved her eventual shift to Lakewood prison, which is said to be hours away from GC. That meant Cane and the twins wouldn’t be able to see Lily on a regular basis, which also allowed Khalil’s recurring status to take hold.

Neil (Kristoff St. John) moved to the Lakewood area to be close to his daughter, which means that one of Y&R’s tenured actors is also likely working on recurring status.

With Lily out of the house, Cane is now parent number one and one A. Mattie (Lexie Stevenson) is the responsible child, except when Reed (Tristan Lake Leabu) is around. Mr. Ashby’s face fully revealed his thoughts when he saw the young Mr. Hellstrom in his kitchen just prior to Christmas.

Cane let Reed know in no uncertain terms that he wasn’t welcomed, which Leabu’s character understood. However, days later he recklessly asked to drive Charlie (Noah Alexander Gerry) to a party. They accidentally hit Nikki (Melody Thomas Scott) along the way, didn’t know it, and drove off.

The above appears to create a way for Reed to remain in town, due to upcoming legal repercussions. Assuming he does, Meed’s flame would naturally lengthen and thus the connection between Cane and Vickie would persist.

Juliet (Laur Allen) may have met Hilary in heaven, fans of both character’s hope. Miss Helton’s unexpected death during childbirth last year left Cane with Sam, but also demonstrated to viewers that Mr. Ashby is capable of straying from Lane.

In that storyline it was involuntary. But in 2019, Cane could easily opt to begin a relationship with the ever-appealing Victoria, as she could with him. CDL is a leading source for everything linked to The Young and the Restless. Check back regularly for Y&R spoilers and news!