BY Heather Hughes on October 14, 2018 | Comments: one comment
Related : Soap Opera, Spoiler, Television, The Young and the Restless 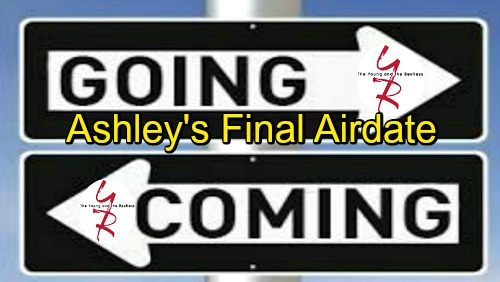 The Young and the Restless (Y&R) spoilers reveal that we’ve got some comings and goings news to share. First, let’s talk about some important airdates. Y&R has several big episodes coming up, so it’s a good idea to look ahead and be prepared.

You’ve probably heard by now that Eileen Davidson is leaving the role of Ashley Abbott. She’s already filmed her final scenes, so her exit story is underway. Naturally, we mean Jack’s (Peter Bergman) paternity twist and the elaborate scheme that led to it. Ashley’s ruthless revenge will cause chaos for her whole family, so expect plenty of Abbott drama as this month continues.

However, Ashley will have to find some form of closure pretty soon. The Young and the Restless spoilers say her last airdate will be on October 29. That only gives Ash a couple weeks to deal with the fallout of what she’s done.

It’s doubtful the show would have Ashley leave without showing real remorse. She certainly won’t be sorry when she explains everything to Jack this Monday, but that should change. Traci (Beth Maitland) may help Ashley see that she went too far.

Jack was wrong for treating Ashley so horribly, but she manipulated declining Dina (Marla Adams) and nearly drove her brother off the deep end. At some point, Ashley may understand the depths of her cruel behavior. Of course, it’s also doubtful that Jack can truly forgive Ashley in two weeks – if he ever can at all. If Jack’s ever going to make peace with his sis, it may take months or years!

Davidson might be open to coming back for a party or some other family occasion down the road. Perhaps that’s our best hope for Jack and Ashley’s reconciliation. However, Y&R fans can at least look forward to some form of a tribute to Ashley’s time on the show. Perhaps we’ll get some good flashbacks as Ashley reflects on the past and ultimately leaves Genoa City behind.

After Ashley departs, it won’t be long until another familiar face returns. Kelly Kruger will be back as Mac starting November 6. Some Y&R viewers think she could be responsible for the cover-up crew’s cryptic notes. If Nick (Joshua Morrow) can wear a J.T. (Thad Luckinbill) mask and Ashley can dupe Jack in the worst way possible, there’s no reason Mac can’t send a few letters.

Nevertheless, it’s too early to say if that’s the shocker the show has in mind. One thing’s for sure: Mac will definitely get caught in some J.T. mayhem. She may be part of how the girls’ night gang is exposed. The Young and the Restless spoilers say some emotional scenes are coming up for fall sweeps, so don’t miss what’s in store.

Finally, we’ll mention a recent departure. Robert Adamson has wrapped up his brief return stint as Noah, but he’ll surely be back one day. Maybe he’ll reenter the picture during Sharon’s (Sharon Case) next crisis. She may go on trial after the deadly J.T. details come out, so that’d be a good reason for Noah to pop in again.

Regardless, some exciting stuff’s ahead on the CBS soap. We’ll give you updates as other details emerge. Stay tuned to Y&R and don’t forget to check CDL often for the latest Young and the Restless spoilers, updates and news.