The Young and the Restless Spoilers: Comings and Goings – Mac Returns as J.T. Chaos Erupts – Jill’s Comeback Brings a Dilemma

BY Heather Hughes on December 29, 2018 | Comments: one comment
Related : Soap Opera, Spoiler, Television, The Young and the Restless 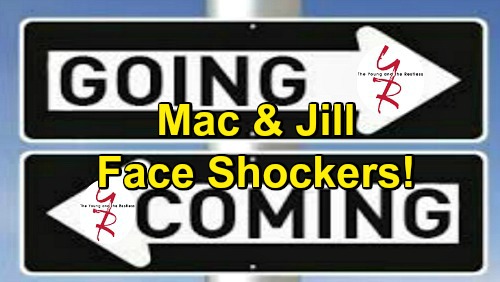 The Young and the Restless (Y&R) spoilers reveal that we’ve got some comings and goings news to share. First, let’s talk about a comeback. Jess Walton will reprise her role as Jill Atkinson starting on a new Y&R episode Thursday, January 3. Jill will do some meddling as usual, but she’ll also prove helpful to at least two Genoa City residents.

Cane Ashby (Daniel Goddard) will need a shoulder to cry on as he deals with Lily Ashby (Christel Khalil) issues. Lily’s changing as a result of her prison sentence. She’s not the same woman she once was and that’s something Cane will have to come to grips with.

Of course, loneliness will also be an problem. In fact, that could be part of the reason Cane reciprocates Victoria Newman’s (Amelia Heinle) kiss this week!

They’ll have a vicious argument about Reed Hellstrom (Tristan Lake Leabu), Charlie Ashby (Noah Alexander Gerry), the hit-and-run accident and their parenting skills. After the conflict leads to passion, Cane will need to get this off his chest.

Jill will listen to what Cane has to say and insist that it should stay between them. She won’t think Cane should breathe a word to Lily or anyone else. This could put Jill in an awkward position when she supports Billy Abbott (Jason Thompson) and his confusing love life.

After he admits he’s drifting back toward Victoria, will Jill keep her mouth shut and urge Billy to go for it? That seems likely!

As for Cane and Lily’s relationship, Daniel Goddard doesn’t want “Lane” lovers to lose hope for their future. In an interview with Soap Opera Digest, Goddard talked about what Y&R has in store. “To ‘Lane’ fans, just know that it’s not over,” Goddard said. “It’s just complicated once again for Cane and Lily.”

Other Young and the Restless spoilers say Mackenzie “Mac” Browning’s return is getting closer. She’ll be back starting Friday, January 11. It sounds like we could see a cover-up crew explosion soon, so Mac may have some harsh words for Victoria and the others. Mac’s kids have suffered thanks to all the secrets and lies. She’ll inevitably want the real story as confessions are made and drama erupts.