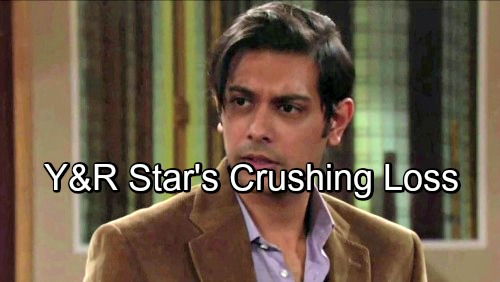 The Young and the Restless (Y&R) spoilers reveal that one CBS soap star is mourning a huge loss. Y&R fans know Abhi Sinha as the lovable Ravi and he’s every bit as lovable off screen. Sinha has frequently featured his adorable dog on social media, but his faithful friend suddenly passed away.

The news came as a real shock to Sinha. Losing beloved “Boba Fett” was an unexpected blow to his family, so they’re still trying to process everything. However, Sinha wanted to fill his fans in on the devastation. He asked for privacy when it comes to the details, but he had to offer a little tribute to his sweet pup. An Instagram post included some great pics and parting words for his companion.

Sinha said, “Our hearts are broken…This past Monday, we had to lay Boba Fett to rest. We are completely shattered, and still in disbelief. We request that you please not ask any questions at this time as we process our grief and heal. We will provide answers if and when we are ready. He was so very much loved and the center of our world.”

Sinha went on to talk about the last months of Boba Fett’s short life. The pooch really made the most of his time on earth. Sinha indicated that Boba Fett lived in a dog’s paradise just before his death. He was hanging out on a five-acre ranch with some other dog pals. Boba Fett managed to squeeze in plenty of playtime before he ultimately passed on.

“As he crossed over the Rainbow Bridge, he was surrounded by the five people who loved him most and slipped away peacefully in my arms,” Sinha said. “Thank you all for following him and making him Instafamous.” On Twitter, Sinha tweeted a similar message and added “RIP Bobey.”

This is clearly a difficult time for Sinha and his loved ones, but plenty of Young and the Restless viewers offered support. Y&R fans respected Sinha’s wishes and didn’t push for answers, but they wanted to say they were sorry for his loss. It’s always tough to bid farewell to a cherished pet.

As for what’s ahead in Genoa City, The Young and the Restless spoilers say Ashley (Eileen Davidson) has a sneaky storyline coming up. Maybe Ravi can get in on the action. We’ll give you updates as other Y&R news emerges. Stay tuned to the CBS soap and don’t forget to check CDL often for the latest Young and the Restless spoilers, updates, and news.

Our hearts are broken. This week we had to lay Boba Fett to rest. We are shattered and request that you do not ask any questions during this time, as we process our grief and heal. He was the center of our world and although his life was short it was full and rich. RIP Bobey ❤️ pic.twitter.com/eCOgERrfZE