The Young and the Restless Spoilers: Devon Needs Lily At Hamilton Winters Group 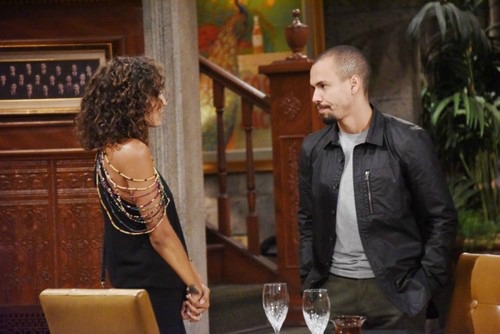 The Young and the Restless spoilers tease that Lily (Christel Khalil) may go to work for her brother, rather than remain stuck between two bickering bosses at Newman Enterprises. Devon (Bryton James) could use an executive and a professional he can trust. Lily fits the bill in both instances.

The demise of Brash and Sassy was enabled by Vickie’s (Amelia Heinle) inconsistent leadership. She regularly mixed romantic pursuits with business, putting the later aside whenever Billy (Jason Thompson) or earlier, Travis (Michael Roark), turned her head, or she turned either man’s.

Lily was initially happy to have kept her job when Brash and Sassy was absorbed by Newman. However, Vickie fronted a hard edge immediately upon assuming the concocted title (Chief Operating Officer) so many other ego’d office types also demanded through the years in their corporate playgrounds.

Compounded by Victoria’s attitude is Ashley’s (Eileen Davidson) arrival at Victor’s (Eric Braeden) company. He recruited his ex-wife and the mother of Abby (Melissa Ordway) as a check against Victoria and to stick it to Jack (Peter Bergman). My, where does Vickie’s dominant behavior streak eminent from?

Ashley openly admitted that she jumped to Newman because Victor won’t always be around. Aiming for the Chief Executive Officer’s spot is bold. That’s also another haughty title the higher-ups tag on themselves to make the world around them seem smaller.

Lily does not have delusions of grandeur. She simply wants to use her talent with a professional position, which will in turn help Lane to raise its family. Her outlook would obviously fit better at the Hamilton Winters Group.

While working for one’s brother and father could lead to personal conflicts, Lily would be part of her family’s company, rather than Newman family squabbles. Yes, there is the Hilary (Mishael Morgan) annoyance to consider. But HWG would seem to be the better career option for Mrs. Ashby overall.

Now, Devon has yet to consider bringing his sister aboard. He has his hands full while Neil (Kristoff St. John) helping his younger son out of town.

It would be great to see Devon, Neil and Lily working together within their family company. The dynamic there would surely be different than the atmosphere that has and likely will exist at Newman.

On a real life note, this scribe and all Y&R fans of goodwill continue to pray for St. John and hope for his eventual return to the show. He’s been missed. Hopefully this time will allow one of the cast’s legacy actors to heal and return in the near future.