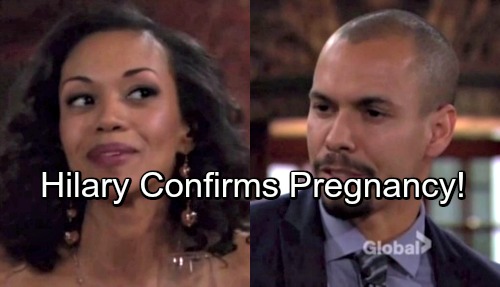 The Young and the Restless (Y&R) spoilers tease that Hilary (Mishael Morgan) will get some big news. She recently fainted, so that naturally brought suspicions that she might be pregnant. For soaps, it’s usually the tell-tale sign that a baby’s on the way. Devon (Bryton James) suggested that Hilary was faking, so he should be caught off guard by her updates.

Nevertheless, Hilary will by happy to announce that one of their sex sessions paid off. Her dream of being a mom is about to come true. Hilary will reveal that she got confirmation of her pregnancy and Devon will have to wrap his head around that. He’ll struggle to process the idea of raising a child with Hilary. They made a deal at one point, but it’ll be different once it’s actually happening.

Devon will wonder if Hilary’s joking at first, but she’ll assure him she’s quite serious. Hilary will smile as she reiterates that Devon’s going to be a “baby daddy.” Devon decided to back out of their agreement just a bit too late. Now he’ll have to suck it up and accept that Hilary will be in his world forever. This kid will link them for the rest of their days, so they’ll both have to get on board.

Of course, Y&R spoilers say Hilary will be thrilled over this development. She obviously wants to be a mother, but she’ll also know this could help her win Devon over. They fight like cats and dogs, but there’s still plenty of chemistry between them. Hilary can’t help but want Devon by her side, so a baby could help with that goal.

However, Devon should have mixed emotions about all of this. He may admit that he still wants to be a father, so that part of this is fine. The Young and the Restless spoilers say it’s Hilary that will spark concerns. Devon may worry about what kind of mother she’ll be and what she’ll teach their child. He’ll fear that she’ll use this to manipulate him as well.

Neil (Kristoff St. John) and Lily (Christel Khalil) will undoubtedly warn Devon about letting Hilary reel him back in. They may suspect that this baby will draw them closer and they’re definitely right! We’ll keep you posted as other Young and the Restless details emerge. Stay tuned to Y&R and don’t forget to check CDL often for the latest Young and the Restless spoilers, updates, and news.