The Young and the Restless Spoilers: Devon’s Suffering Puts Him on the Rebound – Hilary’s Heartbreaking Exit Leads to Quick Hookup

BY Kinsley Goldman on July 24, 2018 | Comments: one comment
Related : Soap Opera, Spoiler, Television, The Young and the Restless 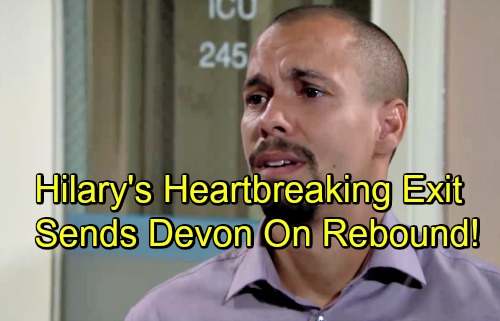 The Young and the Restless (Y&R) spoilers tease that Devon (Bryton James) will face total heartbreak. No matter how you slice it, Devon’s going to deal with devastation. Whether Hilary (Mishael Morgan) dies or slips into a long-term coma, Devon’s love will leave him. He’ll have to find a way to carry on without her.

Of course, that’s not going to be easy. The Young and the Restless spoilers say Devon will fall apart after Hilary’s exit. They’ve been connected for what feels like forever. Even when they weren’t an item, they couldn’t really stay out of each other’s orbit. Y&R always had some excuse to pull them closer and ultimately spark a reunion. Sadly, Devon will feel hopeless and alone before long.

Mishael Morgan’s agent suggested that she was willing to work out a deal and potentially return one day. You may recall that Morgan left the show when she couldn’t negotiate a raise. If The Young and the Restless ever ponies up the cash, who knows what might happen? Even death isn’t an insurmountable obstacle. Nothing’s ever really final in the soap world!

However, Morgan is pregnant with a baby girl and might appreciate some extra time with her family. She might as well try her luck in film and primetime, too. It wouldn’t make sense to bring Hilary back so soon after this, so it’ll undoubtedly be a while if she ever returns. The Young and the Restless needs to play out the rest of this story, which will include Devon’s downward spiral.

Who will Devon bond with along the way? Y&R fans know some lovely lady will be waiting to console him. Someone’s bound to be Devon’s grief rebound! Victoria (Amelia Heinle) is single and ready to mingle, so she might be a good option. She’s got a fierce side like Hilary, which could pull Devon in her direction.

Abby (Melissa Ordway) might be another possibility for Devon. Many Young and the Restless viewers see some good chemistry between them. Will Arturo (Jason Canela) issues drive Abby to Devon’s bed? Nobody should rule it out!

Then again, Devon might find comfort with Mariah (Camryn Grimes). They dated a while back and they both care about Hilary. It’d be easy for them to drink a bit too much and hop back in the sack. Since Tessa (Cait Fairbanks) can’t seem to stop lying, that could push Mariah to her breaking point and set up a betrayal.

Devon and Mariah never seemed to move past the friendship vibe, so most fans weren’t thrilled about them being paired up. That’s why this could be a one-time mistake and give Mariah a secret of her own. If Mariah messes up for change, is might make us feel more sympathy for Tessa.

The Young and the Restless could even bring in someone new for Devon. Another real love interest wouldn’t be a bad idea. Regardless, Devon will have to let go of Hilary and create a new path for himself. We’ll give you updates as other Y&R news comes in. Stay tuned to the CBS soap and don’t forget to check CDL often for the latest Young and the Restless spoilers, updates, and news.