BY Marcy Cohen on August 9, 2018 | Comments: one comment
Related : Recap, Soap Opera, Spoiler, Television, The Young and the Restless 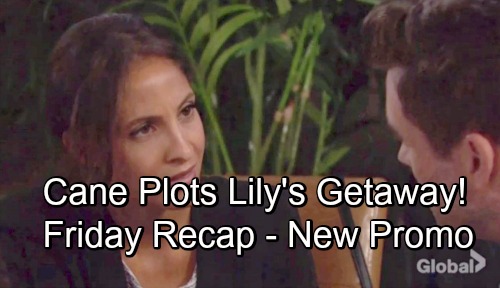 The Young and the Restless (Y&R) spoilers for Friday, August 10, tease that Nate (Brooks Darnell) will have a special delivery. Hilary’s (Mishael Morgan) fans ordered some baby stuff for her before the accident, but the box was left across the hall. Nate will give Devon (Bryton James) the package and note that this kind of thing tends to happen after losing a loved one. Reliving the loss is always tough.

Devon will insist that he never wants to forget Hilary and the love they shared. Meanwhile, Cane (Daniel Goddard) will comfort a nervous Mattie (Lexie Stevenson). He won’t want her to fret too much over Lily’s (Christel Khalil) predicament.

Cane will eventually head over to Devon’s penthouse and beg him to reconsider. Devon won’t budge on Lily’s punishment. He’ll plan to attend the hearing and push the judge to give her the maximum sentence. The Young and the Restless spoilers say Cane will try to throw a punch, but Nate will take him down. Once everyone’s a bit calmer, Devon will maintain that Lily’s going to pay.

Cane will exit, so that’ll leave Nate to offer advice. He just won’t think Devon’s attitude is helping anyone. Back with Cane, he’ll vent to Jack (Peter Bergman) and wonder what he should do. Jack will insist that Cane needs to protect the people he loves. Later, Cane grab his family’s passports and make a phone call. He’ll book one-way flights to Australia, so he obviously hopes to aid Lily’s getaway.

Other Y&R spoilers say Jack will reach out to Phyllis (Gina Tognoni). He’ll want to clear the air after that kiss he tried to plant. Jack will mention Summer’s (Hunter King) encouragement, so Phyllis will realize they were set up. She’ll get emotional as Jack admits he never stopped loving her.

Phyllis will be glad to know Jack doesn’t hate her guts, but she’ll have to let him down gently. She’s already with the man she wants to be with. Jack will understand and suggest that Billy (Jason Thompson) had better treat Phyllis right. Over with Summer, she’ll be taunted by Kyle (Michael Mealor). He won’t think Summer has a shot at hooking up with Billy.

Summer will want Kyle to put his money where his mouth is. She’ll bring up the idea of a friendly wager, so they’ll lay out their terms. Summer will win Kyle’s sports car if she gets Billy in bed by the end of the month. If she fails, Summer will be Kyle’s prize.

At Jabot, Ashley (Eileen Davidson) will continue her efforts to stop Billy. She’ll get into a heated argument with Phyllis, but she won’t give up on her goal. The Young and the Restless fans can expect a fierce fight from Ashley. She won’t give up until Billy’s out of that CEO spot, so stay tuned for more drama.

It looks like some stunning scenes are coming up. We’ll give you updates as other Y&R news emerges. Stick with CBS soap and don’t forget to check CDL often for the latest Young and the Restless spoilers, updates, and news.