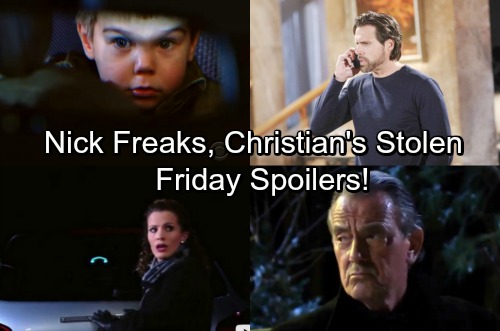 The Young and the Restless (Y&R) spoilers for Friday, February 23, tease that Chelsea (Melissa Claire Egan) will be in full-blown panic mode. On Thursday’s episode, it’s revealed that Chelsea assaulted Sharon (Sharon Case). After leaving Nick (Joshua Morrow) a goodbye note, Chelsea loads her suitcases in her vehicle and heads over to get the boys from Nikki (Melody Thomas Scott).

That probably won’t raise any red flags at first. Chelsea can just argue that Nick’s busy with Sharon, so he asked her to pick the kids up and take them home. However, it looks like Chelsea really plans to take off with Christian (Jude and Ozzy McGuigen) and Connor (Gunner and Ryder Gadbois). She’s certainly getting desperate.

Meanwhile, Sharon will have some news to spill at the hospital. It’s not quite time for the paternity shocker which comes on next week’s new episodes, February 26 – March 2, but Sharon may expose her attacker. Whether Sharon actually caught a glimpse of Chelsea or not, she’ll know exactly what happened. Chelsea didn’t want Sharon to blab the truth to Nick, so she bashed her in the head to prevent it.

Nick will likely take off before Sharon has a chance to share the biggest bomb. He’ll want to confront Chelsea and hear her side of the story. Part of Nick won’t want to believe that Chelsea could be capable of this. When Nick comes home and finds the farewell letter, he’ll definitely start to worry. 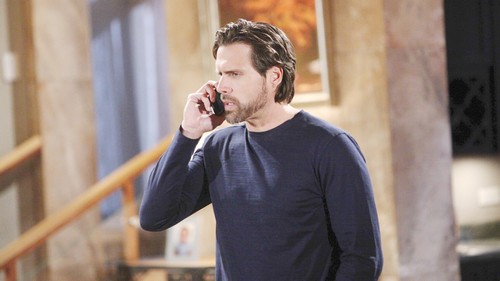 Nick will probably call Nikki to make sure Christian’s still at the ranch. He’ll face a devastating blow instead of confirmation. Nikki may confess that Chelsea already left with both boys. The Young and the Restless spoilers say Nick will freak in Friday’s episode. He’ll hope he can stop Chelsea before it’s too late.

Fortunately, Victor (Eric Braeden) will get to work immediately. Y&R fans can expect Chelsea to land in a tight spot. It sounds like Victor will track down Chelsea’s car and corner her for a heated confrontation. Chelsea will realize she’s in more trouble than ever!

Victor will try to prevent any more damage, but there’s only so much he can do. The Young and the Restless spoilers say Sharon will indeed tell Nick the truth next week. He’ll ultimately find out that Christian is Adam’s (Justin Hartley) son.

Some serious excitement’s brewing on the CBS soap. We’ll give you updates as other details emerge. Stick with Y&R and don’t forget to check CDL often for the latest Young and the Restless spoilers, updates and news.