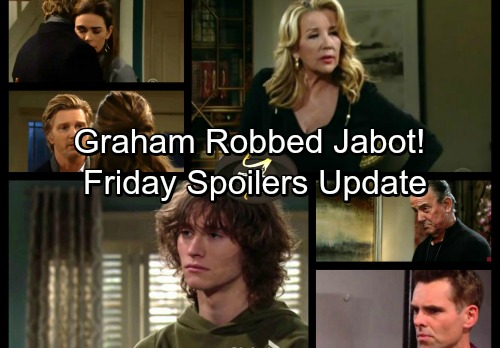 The Young and the Restless (Y&R) spoilers for Friday, January 12, tease that Victoria (Amelia Heinle) will panic when she can’t find Reed (Tristan Lake Leabu). Once J.T. (Thad Luckinbell) arrives, they’ll check the police records online and determine that Reed isn’t in the slammer. A frantic Victoria will wonder if they should call the cops and report Reed missing.

At Phyllis (Gina Tognoni) and Billy’s (Jason Thompson) place, an angry Reed will appear at the door. He’ll reveal that he spent the night at a friend’s house, but he needs another place to stay. Reed will admit that Victoria was talking about boarding school. Billy will call Victoria to fill her in on Reed’s location, but he’ll advise against coming over immediately. Reed could use time to cool off.

Once that’s settled, J.T. will push Victoria to take the day off work with him. He’ll think they need to clear their heads. Victoria will pass, but she’ll share some nice moments with J.T. anyway.

When Nikki (Melody Thomas Scott) appears, she’ll hear about Reed’s latest drama. J.T. will explain that they’re giving Reed a little space, but Nikki will snap that he doesn’t get a vote. She’ll rant about J.T.’s parenting skills, but Victoria will finally put a stop to the conflict.

Later, Victoria and J.T. will face off as well. They clash over their vicious history, but the confrontation will eventually turn passionate. The exes will share steamy kisses and undress on the stairs. Back at Billy and Phyllis’ apartment, Nikki will barge in and demand to see Reed. She’ll threaten to have him thrown in prison if he doesn’t come with her this instant.

The Young and the Restless spoilers say Victor (Eric Braeden) will give Reed some tough love, too. At the ranch, Vic will be happy that Reed’s moving in. However, he’ll warn that this won’t be easy. Victor will refer to it being like boot camp, which means Reed will have to do chores and get a haircut. Reed will fume over the news, but Victor and Nikki will smile at their teamwork.

Across town, Billy will notice Cane (Daniel Goddard) seems glum. Cane will admit he’s thinking about Lily (Christel Khalil), so Billy will push him to do something bold. Y&R spoilers say Cane will declare he’s going to get Lily back. He’ll run out the door, presumably to catch a flight to Paris.

Meanwhile, Ashley (Eileen Davidson) will find out about the lab break-in. She’ll think she needs to figure out which compounds were stolen. It could help with determining the motive. When Ashley meets up with Billy, she’ll vow to make the thief pay.