BY Marcy Cohen on January 17, 2018 | Comments: one comment
Related : Soap Opera, Spoiler, Television, The Young and the Restless 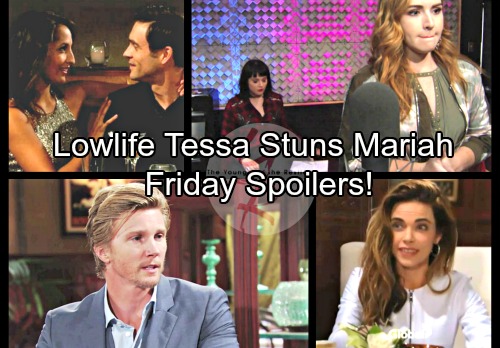 The Young and the Restless (Y&R) spoilers for Friday, January 19, tease that Mariah (Camryn Grimes) will face some shocking blows. Tessa (Cait Fairbanks) stole Mariah’s journal, so that’ll be tough to hear. Despite the tension between them, Mariah never thought Tessa would stoop so low. She trusted Tessa, but that clearly wasn’t the best idea.

Mariah’s journal was a place to vent and open up about all her pain. Tessa’s the one who caused that pain, which makes this even worse. Of course, Tessa also intends to share Mariah’s deep feelings with the whole world. In Thursday’s episode, Tessa writes a song that lines up with everything Mariah’s gone through. She shares it with Devon (Bryton James), so he may be ready to debut it soon.

On Friday, The Young and the Restless spoilers say Mariah will get some stunning updates. She may forbid Tessa from taking her plans any further. Mariah will certainly feel like Tessa violated her privacy and took advantage of her sorrow. Things have already been strained between them, but Tessa really messed up this time. She’ll have plenty of work to do if she wants Mariah’s forgiveness.

Across town, Cane (Daniel Goddard) and Lily (Christel Khalil) will come back from their trip to Paris. These two will finally be on the same page about their future together. Y&R spoilers say Lily and Cane will deliver some great news to the twins. Charlie (Noah Alexander Gerry) will obviously be thrilled for his parents. Even Mattie (Lexie Stevenson) will let herself be hopeful for once.

Lily, Cane, Mattie, Charlie and Sam can all be a happy family. It won’t be easy at first, but Cane and Lily are willing to do whatever it takes. Elsewhere, Victoria (Amelia Heinle) will struggle to keep her mind off J.T. (Thad Luckinbell). The Young and the Restless spoilers state that J.T. definitely won’t help the situation. He’ll undoubtedly push for as many sex sessions as he can get.

Now that they’re being intimate again, J.T. and Victoria can’t get enough of each other. Victor (Eric Braeden) feels like this reconnection is a huge mistake and he’s probably right. However, that won’t stop Victoria and J.T. from enjoying it while they can! We’ll keep you posted as other Y&R details emerge. Stay tuned to the CBS soap and don’t forget to check CDL often for the latest Young and the Restless spoilers, updates and news.