BY Marcy Cohen on January 3, 2018 | Comments: one comment
Related : Soap Opera, Spoiler, Television, The Young and the Restless 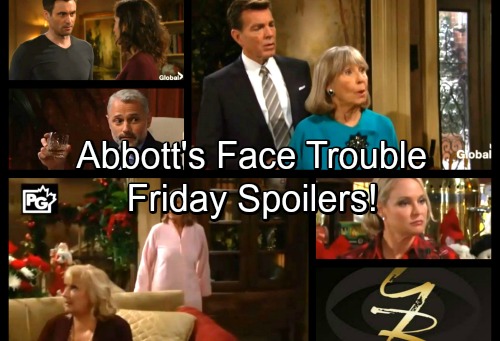 The Young and the Restless (Y&R) spoilers for Friday, January 5, tease that Abby (Melissa Ordway) will stand her ground. She’ll blame Scott (Daniel Hall) for Sharon’s (Sharon Case) pain and suggest that that she’s not really the cheater. Abby won’t think she should be held responsible for what Scott did.

Of course, Abby could’ve walked away at any time. Scott is certainly at fault for his role in Sharon’s suffering, but Abby isn’t blameless. She helped destroy Sharon’s relationship and she’s acting like a spoiled brat!

It seems Abby will continue to butt heads with Sharon for now, but things will shift soon enough. Abby will eventually decide she shares some guilt in this. The Young and the Restless spoilers say Abby will apologize to Sharon next week, so we’ll see how that goes. Abby deserves more backlash, but maybe Sharon will cool off a bit by then.

Meanwhile, Traci (Beth Maitland) will face some stunning news. There should actually be multiple shockers. First, Jack (Peter Bergman) and Ashley (Eileen Davidson) will explain how Dina (Marla Adams) became a kidnapper. They’ll let Traci know that Dina thought Christian (Jude and Ozzy McGuigen) was “Jackie,” so she stole him from athletic club.

Next, Ashley and Jack will reveal their plans for Dina. It’s clear that their mother needs professional caregivers watching her at all times. The Abbotts may want to put Dina in a nice facility where she’ll be comfortable and looked after.

A third bombshell might be Graham’s sudden arrival. He’s already been spotted in town, so he should mosey over to the Abbott mansion pretty soon. The Young and the Restless spoilers say this family will struggle to cope with all the chaos.

Elsewhere, Cane (Daniel Goddard) will make a daring move. When he sees Lily (Christel Khalil), he’ll surprise her with a passionate kiss. Lily will enjoy it, but she’ll be reluctant to take Cane back just yet. He’ll have to work a little harder if he wants this Y&R reunion, but it’s coming. Cane just has to decide he’s willing to fight for the woman he loves.

It sounds like some exciting developments are in the works. We’ll give you updates as other Y&R details emerge. Stay tuned to the CBS soap and don’t forget to check CDL often for the latest Young and the Restless spoilers, updates and news.