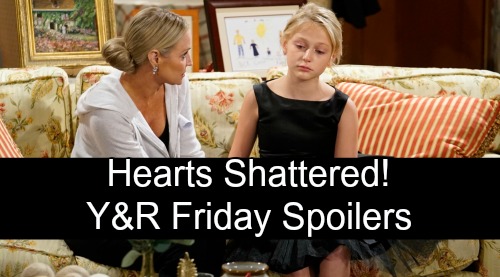 The Young and the Restless (Y&R) spoilers for Friday, October 5, tease that we’ll see the aftermath of Sharon (Sharon Case) and Nick’s (Joshua Morrow) disastrous wedding. Sharon considered not showing up at all, but she ultimately decided to come reject Nick in person! She obviously wanted Nick to feel some of the pain she’s feeling.

Thursday’s episode brings the derailed vows, so the fierce fallout will come on Friday. You can bet Mariah (Camryn Grimes) will feel guilty for running her mouth. Some Y&R fans seem to be unfairly blaming Mariah for this mess, but it’s not her fault at all.

The timing was terrible, but that’s on Summer (currently played by Bayley Corman). As for the betrayal itself, only Nick and Phyllis (Gina Tognoni) are responsible. Mariah was simply being a good daughter by making sure Sharon had all the facts. If she hadn’t come clean, people would be blaming her for that, too. Mariah was clearly in an impossible situation, so she handled it as best she could.

Nick made a mistake by sleeping with Phyllis and trying to hide it. Unfortunately, Sharon has now made a mistake of her own. We all love a soapy wedding blowup, but it was awfully cruel to do this in front of Faith (Alyvia Alyn Lind). The poor girl was already worried about “Shick’s” marriage failing, but she never expected a catastrophe like this!

The Young and the Restless spoilers say Faith will be devastated on Friday. It looks like Nick and Sharon will have to put their own issues on hold. Faith has to come first as they work through this family crisis.

Noah (Robert Adamson) and Mariah will try to be there for Faith as supportive siblings, but this was certainly traumatic. Faith had to listen to her mother publicly shame her father. She’ll also have to accept that their perfect family has gone up in flames.

As for Mariah, the drama should keep coming. She may get an earful from Nick when he learns she blabbed. Noah may also want to address Mariah’s relationship with Tessa (Cait Fairbanks), but Sharon and Faith will remain her priority. They’re both going to be in a fragile state for a while, so they’ll need plenty of support.

Other Young and the Restless spoilers say Billy (Jason Thompson) will blast Phyllis. She’ll insist that they were on a break when the hookup happened, but her dishonesty will still be a problem. It appears their new engagement will suddenly be off, but is there still hope for their future? “Philly” might reunite sooner or later, but this will definitely be a tough obstacle to move past.