The Young and the Restless Spoilers: J.T. Abducts Victoria After She Refuses To Run Away With Him – Captive Fiancée In Danger

BY Heather Hughes on March 30, 2018 | Comments: one comment
Related : Soap Opera, Spoiler, Television, The Young and the Restless 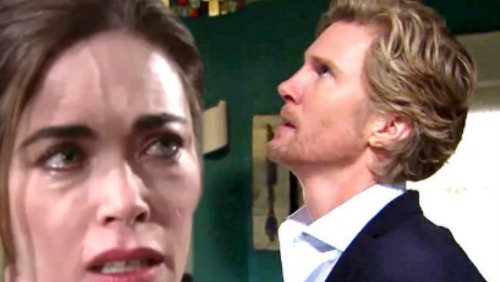 The Young and the Restless (Y&R) spoilers reveal that J.T. (Thad Luckinbell) is making a huge mistake. Sticking around Genoa City is undoubtedly a terrible idea. J.T.’s walking around like nothing’s wrong, but he nearly killed a man!

During his stunning fight with Victor (Eric Braeden), J.T. shoved his enemy down the stairs. Victor is still in critical condition, but he’ll be on the mend soon enough. He even offers a hint about his attacker in Friday’s Y&R episode. Victor manages to mutter Victoria’s (Amelia Heinle) name and suggests that someone should tell her.

Nobody understands what Victor’s talking about yet, but that could change soon enough. For some reason, J.T. seems to think he’s in the clear. He’ll push Victoria to share the engagement news with her kids, so he’s obviously planning on a long and happy life in GC. Little does he know that Victor’s wrath is looming!

The Young and the Restless spoilers state that Victor isn’t going anywhere. He’ll recover eventually and that means he could spill what J.T. did to him. What will J.T. do when the walls start closing in? He certainly won’t want to land behind bars for his actions.

J.T. might push Victoria to run away with him. He could argue that they need to get a fresh start somewhere far away. Naturally, Victoria would object to that idea. Her children are happy with their extended family in Genoa City. They go to great schools and love spending time with all their relatives.

Furthermore, Victoria won’t want to leave Newman Enterprises or her ailing father. If J.T. tries to sell this plan, he’ll definitely face resistance. Victoria just won’t get what J.T.’s trying to prove. What might happen if Victoria refuses to go with J.T.? Could he try to force her?

It’s clear that J.T. can come unhinged in heated arguments. He left major bruises on Victoria’s throat after he tried to choke her. If J.T. comes after her again, Victoria may worry that he could leave her with serious injuries. She might even fear that she’ll be killed!

Based on the way things are going, no one would be surprised if J.T. abducted Victoria. This could lead to a desperate search and plenty of danger. Do you think a hostage situation is brewing? We’ll give you updates as other Young and the Restless details emerge. Stay tuned to Y&R and don’t forget to check CDL often for the latest Young and the Restless spoilers, updates and news.