BY Kinsley Goldman on February 28, 2018 | Comments: one comment
Related : Soap Opera, Spoiler, Television, The Young and the Restless 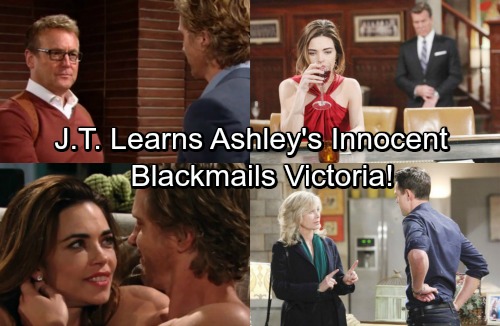 The Young and the Restless (Y&R) spoilers tease that Victoria (Amelia Heinle) could be making a huge mistake. She’s playing with fire by going up against Ashley (Eileen Davidson). The plan is for Jack (Peter Bergman) to slip inside Newman info into a business interview. Victoria hopes it’ll convince Victor (Eric Braeden) that Ashley leaked privileged details to her brother.

If all goes well, Victoria can get Ashley thrown out of Newman Enterprises for being a spy. Of course, things rarely go according to plan on The Young and the Restless. There’s a good chance Victoria will face some unanticipated obstacles. One of them just might be J.T. (Thad Luckinbell)!

Y&R fans know that Victoria hired J.T. as the head of security, so he’ll certainly be keeping tabs on everything. J.T. also made it clear that he wasn’t going to play favorites or turn against the people Victoria disliked. He assured Victoria that he would do his job and support all Newman employees.

Plus, Paul (Doug Davidson) and J.T. have an intriguing arrangement. Since J.T.’s working undercover, that’ll give him even more of a reason to stay on top of the situation at Newman. Y&R Buzz days he could easily find out about Victoria’s scheme to deceive Victor and bring Ashley down.

What would J.T. do with that information? Perhaps he could save it for a rainy day and spring it on Victoria exactly when he needs it. J.T.’s obviously desperate to keep Victoria in his life. He’s keeping major secrets, but he seems to truly care about her. Just how far will J.T. go to protect his relationship?

Mac (Kelly Kruger) is coming back soon and she’ll undoubtedly be against J.T.’s romance with Victoria. However, her reasons may go deeper than jealousy or bitterness. Mac may have genuine concerns about Victoria’s well-being. It’s possible that J.T.’s been violent in the past or something along those lines.

Regardless, Mac could convince Victoria to bail on J.T. If Victoria dumps him and possibly fires him, what will J.T. do? Could he use her own secret against her? J.T. might reveal that he knows all about Victoria’s sneakiness. He could vow to expose her plot to destroy Ashley and deceive her father.

In other words, J.T. could try to blackmail Victoria into staying with him. If she resists, J.T. could take it one step further. He could explain his undercover mission and suggest that he has the power to take Victoria’s immunity off the table. This could leave her in a real bind!