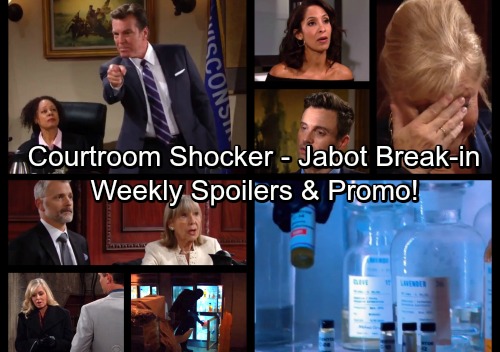 The Young and the Restless (Y&R) spoilers for the week of January 8-12 tease that some explosive confrontations are on the way. For starters, the Abbotts will face off with Graham (Max Shippee) in the courtroom. Jack (Peter Bergman) will shout that Graham’s exploiting Dina’s (Marla Adams) disease to get rich. He certainly won’t think Graham has Dina’s best interests at heart.

Graham will insist that Jack, Ashley (Eileen Davidson) and Traci (Beth Maitland) haven’t been watching out for Dina. He’ll undoubtedly bring up Dina’s string of crazy incidents. Dina burned down The Underground, stabbed Nikki (Melody Thomas Scott) and kidnapped Christian (Jude and Ozzy McGuigen)! The tot snatching was Graham’s fault, but he’ll blast the Abbotts for it anyway.

Graham will also stun everyone with some wild news. He’ll drop a bombshell that could change everything. However, that won’t be the only shocker this week. The Young and the Restless spoilers say someone will break into Jabot’s lab. Ashley will contend that the person who did this is going to wish he or she was never born. The mysterious thief will cause serious problems for the Abbott clan.

Meanwhile, Lily (Christel Khalil) will worry about her upcoming business trip with Abby (Melissa Ordway). She’ll fear that she’s throwing away her last chance to save her marriage. Cane (Daniel Goddard) will plead with Lily to stay, so maybe she’ll back out before her flight to Paris departs.

Across town, Abby will need to do one last thing before heading out. She’ll plan to apologize to Sharon (Sharon Case) for having a fling with Scott (Daniel Hall). Y&R spoilers say Abby is finally ready to own up to what she’s done.

Sharon will be in the middle of a fun gathering when Abby arrives. The “other woman” will really kill the mood. Phyllis (Gina Tognoni), Mariah (Camryn Grimes), Tessa (Cait Fairbanks), Chelsea (Melissa Claire Egan) and Hilary (Mishael Morgan) will all be willing to step out. They won’t want to intrude on a private matter, but Sharon will insist that they should stay.