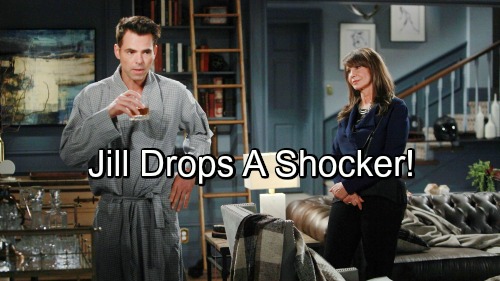 The Young and the Restless (Y&R) spoilers tease that Jill (Jess Walton) is headed back to the CBS soap and she’ll definitely be stirring up trouble. Of course, that’s what Jill does best! She never comes to town without a good reason, so expect major drama to bring Jill home.

Y&R recently shared a fun pic on Twitter, which included Jess Walton, Peter Bergman (Jack) and Melody Thomas Scott (Nikki). Mal Young, the show’s head writer and executive producer, retweeted the tweet and added a comment of his own. He teased, “Oh yeah. She’s back to kick some…” It seems he wants Young and the Restless viewers to fill in the blank there!

Who will Jill be blasting this time? There are a couple of exciting options to consider. It’s clear that Summer’s (Hunter King) already causing issues for “Philly.” The Young and the Restless spoilers say the situation’s only going to get worse.

In fact, Summer and Billy will share some secrets with each other next week. It could be the beginning of true bonding and deceiving Phyllis (Gina Tognoni). After that, a hookup could be brewing. Billy and Summer could at least get caught in a tight spot. Phyllis may believe they’re having an affair, so she could wash her hands of them both.

Jill might arrive back in Genoa City to scold Billy for his playboy behavior. She’s never been a huge fan of his relationship with Phyllis, but she could still object to this shocker. Jill would surely be even more unhappy about Billy and Summer getting it on! She might get a chance to rip into the potential cheaters.

However, The Young and the Restless likes to make the most of Jill’s return stints. Perhaps there’s another great reason for Jill’s comeback. Could this involve Jack’s paternity? She was on set at the same time as him, so that could be a clue about their upcoming scenes together. Billy could easily tie in here as well.

Maybe Jack’s misfortune will ultimately become Billy’s. Is Jill keeping a stunning secret? Will they rewrite Billy’s paternity and make him the non-Abbott? If all the right bombshells play out, Billy could lose his love, his identity and the CEO spot! It might take a while for everything to be revealed, so Jill could lash out at Jack and try to keep the big secret under wraps.