The Young and the Restless Spoilers: Joshua Morrow Reveals Why He Decided to Leave Y&R, What Changed His Mind 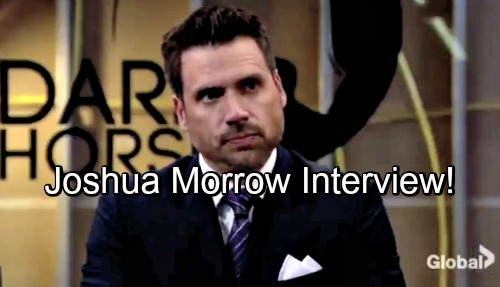 The Young and the Restless (Y&R) spoilers tease that Nick (Joshua Morrow) will continue his mission for vengeance. He’s out to get Victor (Eric Braeden) and there’s no turning back! In an interview with Michael Fairman, Joshua Morrow dished on Nick’s dark side and offered some hints about what’s to come.

For starters, Morrow talked about Nick’s ultimate goal. He echoed Nick’s comments about Victor crossing the line when he took Christian (Jude and Ozzy McGuigen). Morrow suggested that even though Nick got his son back, he has every intention of destroying Victor. To do that, Nick needs a game plan. He seems to have found one with Dark Horse, but the road to revenge could get bumpy!

“Nick just really wants to hurt his dad in the worst possible way, and you do that by taking the thing that matters the most to him…his business,” Morrow said. “I don’t think Nick fully realized the scope of it.” Of course, this is a dangerous situation. To take on Victor, Nick had to stoop to his level. Now that he’s down in the mud, he may not be able to pull himself up anytime soon.

Morrow argued that Nick “is coming from a good place, even though he can’t see the darkness that is slowly creeping in.” It’s adding some layers to Nick’s character, which is good for Morrow. He noted that his 25th anniversary with the show’s coming up. Nick’s spent most of that time playing the nice guy, so he’s definitely loving his latest storyline. It’s something a little different to work with.

In fact, Morrow was thinking about leaving Y&R before this story fell into his lap. “Six months ago, I was thinking ‘I am done at 25 years. I just don’t think I can do it anymore. It’s been a great run. I’ve said everything I can say.’ However, this storyline came along and renewed Morrow’s interest in his character. He insisted that it’s given him a new energy, so he no longer sees himself walking away.

Finally, Morrow was asked about Nick and Victor’s reconciliation chances. Will The Young and the Restless ever let them move past their issues? “…I don’t think it makes a lot of sense for Nick and Victor to hate each other for the rest of their lives,” Morrow confessed. He suggested that the writers would have to come up with a way to bridge the gap.

That’s fantastic news for anyone who’s a fan of Nick and Victor’s softer scenes. It sounds like they could get back to a better place eventually. In the meantime, The Young and the Restless spoilers say Nick’s destruction will wreak havoc! We’ll give you updates as other Y&R details emerge. Stick with the CBS soap and don’t forget to check CDL often for the latest Young and the Restless spoilers, updates, and news.