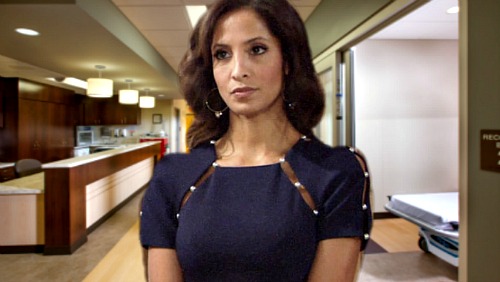 The Young and the Restless (Y&R) spoilers tease that Lily (Christel Khalil) has something shocking up her sleeve. She’s made it clear that she’s not on board with Devon (Bryton James) and Hilary’s (Mishael Morgan) baby-making plan. Lily just doesn’t like the idea of Devon tying himself to that schemer for the rest of his days. That’s why she intends to do a little scheming of her own.

Lily would do anything to protect Devon from Hilary’s twisted web. She’ll be prepared to do something drastic if necessary. In Wednesday’s Y&R episode, Lily alludes to her plot during a chat with Abby (Melissa Ordway). She suggests that if Devon can’t see the error of his ways, she’ll have to come up with a more creative tactic.

Later, Lily eavesdrops on a significant conversation. She listens as Hilary makes her insemination appointment, so Lily will know when and where it’s set to go down. The Young and the Restless spoilers say Lily will mull over the opportunity that just fell into her lap. She’ll have to figure out just how far she’s willing to take her mission.

Is Lily about to make a crazy move? It certainly looks like that way! Since Lily loathes Hilary and she’s desperate to stop her from having Devon’s kid, perhaps she’ll swap the sperm sample. Once Hilary’s pregnant, Lily could drop some hints that lead to the switcheroo revelation. She might be able to make it seem like a clinic mistake – at least at first.

Lily’s goal would probably be for Devon to back out of the deal. Since this wouldn’t really be his son or daughter, Devon might decide the situation’s too messy. He could bow out and suggest that Hilary should raise the child on her own like she originally planned.

Lily would score a victory, but it could turn into a crushing defeat later. You can bet that Devon would hit the roof once Lily was revealed as the sample swapper. He’d rip into her and perhaps have a change of heart about Hilary’s baby.

Would Devon take pity on Hilary and raise the kid anyway? How would the true biological father fit in all this? Could Lily’s move ultimately lead to Devon and Hilary’s reunion? We’ll give you updates as other Young and the Restless news comes in. Stick with Y&R and don’t forget to check CDL often for the latest Young and the Restless spoilers, updates and news.